Donald Trump and the Truth About Lee Harvey Oswald and Cuba

In one of the stranger subplots of the 2016 Republican primary, Donald Trump cited an unsubstantiated report Tuesday from a tabloid that Ted Cruz’s father was with President John F. Kennedy’s assassin in 1963.

The report rests on the thinnest of journalistic evidence: The National Enquirer claimed that a Rafael Cruz is standing near Lee Harvey Oswald in a grainy black-and-white photo of Oswald taken in August of 1963, a few months before the assassination. The tabloid does not corroborate the claim in any other way and an expert on the assassination found it dubious. For its part, the Cruz campaign said the idea is “cheap tabloid garbage.”

The story also doesn’t gibe with other reports about Cruz’s father during an interesting period in Cuban-American history.

Since 1952, Cuba had been ruled by strongman Fulgencio Batista. Castro and his compatriots had attempted in 1953 to lead an uprising against Batista’s government, and in 1956 they began another revolt that would ultimately prove successful. During the course of those years, Castro was often portrayed in the U.S. press as the leader of a well-meaning if perhaps quixotic effort to restore democracy. “We have assumed the responsibility of throwing out Batista’s dictatorship and re-establishing the constitutional rights and freedoms of the people,” he told TIME in 1958.

It was during that period, in 1957, that Rafael Cruz suffered a beating from the forces of Batista. (Rafael Cruz has often been named as an active fighter on Castro’s side in the 1950s, though some acquaintances of his youth have claimed that his revolutionary actions weren’t quite as extreme as that.) Not long after that incident, he fled for the United States, initially on a student visa. As reported by the New Yorker, Rafael Cruz continued to advocate for the revolution after his arrival in the United States but before Castro actually succeeded. Ted Cruz has said that by 1960, his father had renounced his support for Castro and made serious attempts to communicate that fact to anyone he had spoken to before his change of heart.

This timeline matches up well with the popular American take on Cuba: it was in 1959 and 1960 that the extent of Castro’s communism, and the strictness with which he would rule, became clear. The initial trade embargo between the U.S. and Cuba began in 1960, the U.S. embassy in Havana closed in January of 1961, even as crowds of Cubans attempted to get out.

MORE: Why Did the U.S. and Cuba Sever Diplomatic Ties in the First Place?

As for Lee Harvey Oswald, as TIME reported almost immediately after President Kennedy’s death, he once admitted to appreciating Communist ideas from the time he was a teenager—a notable admission during the Cold War—but nonetheless joined the Marine Corps and ended up serving in Japan, where he was court-martialed twice before getting a discharge in 1959. After that, he went to the Soviet Union, where he met his wife and attempted to become a Russian citizen. Failing that, he returned to Texas in 1962, where his troubles continued, as TIME explained:

Fair Play for Cuba had been (prior to its disbanding shortly after Kennedy was killed) a New York-based organization that, as was explained during a radio debate in which Oswald participated in August of 1963, supported the re-establishment of relations between the U.S. and Cuba. “We are not particularly interested in what Cuban exiles or rightists members of rightist organizations have to say,” Oswald said at that time. “We are primarily interested in the attitude of the U.S. government toward Cuba.”

Shortly after that “scuffle” in New Orleans, Oswald moved to Dallas. In the fall of 1963, he tried to go to Cuba but could not get a visa. In November of 1963, he shot JFK.

Today, after decades of tension between the United States and Cuba, the years between roughly 1956 and 1960 are easy to overlook. But during those years the world had to quickly reassess the character of Fidel Castro. For a person of Cuban origin living in the U.S. at that time, as Rafael Cruz was, the switch from supporting the revolutionary Castro before 1959 to opposing him after 1960 was not all that surprising. Meanwhile, the timing of Oswald’s pro-Castro period—coming after 1962, when it was already clear what a Castro regime would look like—is in line with Oswald’s more extreme communist leanings. That would have put Rafael Cruz and Oswald on different sides in 1963, making the Enquirer‘s claim unlikely.

But the Kennedy assassination has always attracted conspiracy theories, no matter how unlikely. One conspiracy theory holds that Oswald’s support of Castro was staged to give the U.S. a reason to invade Cuba, while another holds pretty much the opposite, that Oswald actively conspired with Castro in the killing. 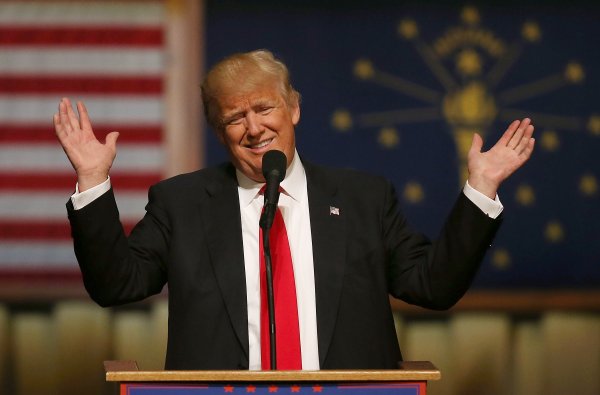 Donald Trump Misunderstands and Misuses 'Rape'
Next Up: Editor's Pick