Captain America Was One of the First Nazi Hunters

That 1941 birthday puts Captain America squarely in the age range of the world’s favorite superheroes, just a few years younger than Superman and Batman (introduced in 1938 and 1939, respectively). But that’s not the only reason why the date is significant.

Notably, Captain America was introduced 10 months before that year’s most famous—or, rather, infamous—date: Dec. 7, 1941. When the red-white-and-blue super-soldier slugs Hitler on the cover of the first issue of his eponymous comics series, he was doing so well before Pearl Harbor prompted his nation to declare war in the real world.

This wasn’t the first time that World War II made itself known in American comics. In 1940, for example, Superman had come up against a mustachioed dictator—but, despite the physical resemblance to the real-life Hitler and Germany, he was “Amork,” leader of “Blitzen.” On the cover of the first Captain America, on the other hand, Hitler is named and the background contains real Nazi imagery.

Many comics used thinly-veiled stand-ins out of fear that using real names could expose publishers to criticism and potentially charges of defamation, as related by historian John E. Moser in a piece on the portrayal of Nazis in Captain America. While Captain America was not the first superhero to confront real-world WWII villains, it was noteworthy that his creators had decided to be so overt about it.

In the real United States, the question of enemies remained unsettled in March of 1941. The Lend-Lease Act did not pass until that month, due largely to isolationist objections. Though few Americans would have openly said they were pro-Hitler, many Americans felt that the nation had no business intervening in a war that belonged to the rest of the world.

That first Captain America cover looks like an illustration of agreed-upon good-versus-evil. In its time, however, it would have been one step ahead of the consensus.

As Randy Duncan and Matthew J. Smith note in Icons of the American Comic Book, Marvel had a “general policy of abstaining from making overt political statements” but Captain America has often been an exception to that rule—a trend that, to some observers, continues in the comics story on which the new movie is based. 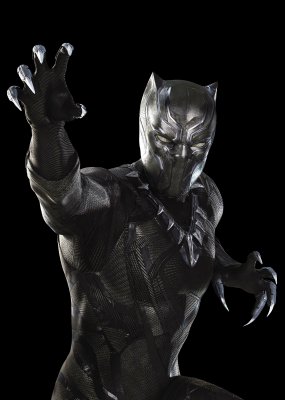 Why Black Panther's Debut in Captain America: Civil War Is So Important
Next Up: Editor's Pick