Decidedly settled science: You can't deny your way out of this mess
zhuyongming & Getty Images/Moment RF
Ideas
By Jeffrey Kluger
Jeffrey Kluger is Editor at Large for TIME magazine and the author of ten books, including Apollo 13, Apollo 8 and two novels for young adults. He has written more than 40 cover stories for TIME on topics ranging from space to human behavior to climate to medicine. Along with others at TIME, Kluger is an Emmy nominee for the web series A Year in Space.

Don’t you just hate it when you’re arguing with people who make really good points and leave you absolutely no rejoinder? Wouldn’t it be nicer if you could just invent dumb stuff for them to say and then make fun of them when they do?

Welcome to the last rhetorical refuge of the climate-change denier.

It’s not an easy time to practice climate denialism. When nearly every sentient scientist on the planet agrees that climate change is a global threat and 175 countries sign an agreement to curb it, you’re going to feel awfully lonely when the best you’ve got on your side is a U.S. Senator who brought a snowball onto the floor of the upper chamber as proof that the Earth can’t be warming, plus a lot of online friends with names like @WeaselFeet23 (sorry, Dr. @WeaselFeet23) who publish their scientific arguments 140 characters at a time.

Failing that, it helps if you can continue the climate argument on your own by responding to things you wish the other side would say, but won’t. Take the business of climate change being settled science.

For a long time, scientists have been telling the world that humans are a significant cause—likely the leading cause—of the dangerous deterioration in the climate that has played out over the past few decades. Unmoved, critics continued to howl that the whole thing was a hoax—something about One World Government or the Federal Reserve or who-knew what-all—and so finally, during his 2014 State of the Union Address, President Obama tried to move on, echoing something the scientists had been saying for a long time:

“The debate is settled,” he said, “climate change is a fact.”

You’d think it would be hard to argue with that, but pundits on the right showed a way. In a column shortly after Obama’s speech, The Washington Post’s Charles Krauthammer, conceding that he believes greenhouse emissions are indeed a serious threat, wrote, “I also believe that those scientists who pretend to know exactly what this will cause in 20, 30 or 50 years are white-coated propagandists.”

That would indeed be propaganda, but as I mentioned at the time, it is very explicitly not what the scientists say. They concede that predicting the exact state of the climate at any one point in time is impossible, and there’s barely a journal paper printed anywhere that doesn’t include a section at the end headed, “Limitations and Questions” that spells out the work that still needs to be done—climate papers among them. But the scientists are very clear about where the trend lines are pointing, and they’re not good.

George Will, Krauthammer’s Washington Post colleague, was up to the same mischief much more recently when, in an April 22 piece, he cited the “settled science” construction and then sniffed, “Of course the climate is changing; it never is not changing — neither before nor after the Medieval Warm Period (end of the 9th century to the 13th century) and the Little Ice Age (1640s to 1690s), neither of which was caused by fossil fuels.”

That’s true, they weren’t, but we know what they were caused by: In the case of the Medieval Warm Period it was an increase in solar activity and a decrease in volcanic activity; in the case of the Little Ice Age it was principally a decrease in solar activity. The scientists know this and repeatedly say this. They also say that none of that is at play now, which is what makes fossil fuels the only plausible cause.

What raised Will’s dudgeon is the recent announcement that attorneys general from 25 states, cities and the Virgin Islands have formed a coalition to investigate whether the oil companies knew about the dangers of climate change while continuing to take out ads claiming that there was nothing to worry about. If so, that could be a violation of New York’s Martin Act, which outlaws making false or misleading statements in the marketing of securities. According to Will, however, this is “a campaign to criminalize debate about science” and an attempt to “enforce limits on speech” in order to prevent “unhelpful” thinking.

Again, terrible if true—but it’s not. Scientific debate never stops. Scientists spend half their time at conferences where they, you know, confer, and journalists are invited—indeed implored—to attend. It’s through that debate that science becomes the iterative, self-correcting process it is.

Just today, exactly one week after Wills’ piece, the journal Science announced that it was retracting a previously published paper about how species adapt to climate change because the authors themselves came forward after they concluded that some of their analysis was flawed. If they hadn’t discovered that, somebody else would have. That’s free speech. So is a pundit offering an opinion about how he thinks science works. Violations of the Martin Act—if that’s what the oil companies’ actions amount to—are illegal speech.

Finally, and least defensibly, is Will’s insistence that critics who use the term “climate change deniers” instead of the more decorous “climate change skeptics” are deploying an epithet “obviously coined to stigmatize skeptics as akin to Holocaust deniers.”

Let’s start by reflecting on the astonishing zero percent effectiveness rate of comparing anything to The Holocaust that isn’t actually a holocaust. More relevantly, let’s consider what we mean by skepticism. If I tell you that I question whether leaving the European Union will actually benefit Great Britain, count me a Brexit skeptic. But if I say that I question whether there’s really an attraction between a massive body like a planet and a falling object like a brick, feel free to call me a gravity denier, because skepticism is too good for the nonsense I’m peddling.

That, ultimately, is the thing about science—you can’t argue it or pundit it into submission. Climate change is a deadly serious business. Period. There are more than enough debates about the best way to deal with it without playing games about what we know—or about what the people on the other side are saying. 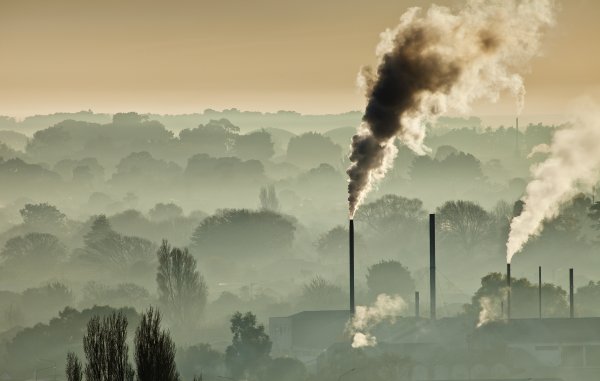 Why the Government is Right to Investigate Oil Industry Ads
Next Up: Editor's Pick