Top aides to Donald Trump’s presidential campaign met Thursday with the Republican Party elite in an effort to allay concerns over his insurgent candidacy.

Meeting with the same individuals their candidate has derided for months, newly empowered Trump convention manager Paul Manafort and political director Rick Wiley led a 20-min presentation Thursday afternoon to make the case for Trump as a general-election candidate.

Manafort focused his remarks on how Trump will reposition himself for the general election, saying Trump would take steps to recast himself as a more serious candidate, beginning with a foreign policy speech next week. Acknowledging many reservations among Republican National Committee members about Trump’s temperament, Manafort cast it as an act.

“When he’s talking about the kind of things he’s talking about on the stump, he’s projecting an image that’s for that purpose,” Manafort said, according to notes prepared by an attendee and verified by multiple attendees, saying Trump understands he has to soften the edges. “He gets it. The part that he’s been playing is evolving.”

Manafort acknowledged that both Hillary Clinton and Trump would be historically unpopular nominees, but argued Trump’s flaws are more easily fixable.

“Fixing personality negatives is a lot easier than fixing character negatives,” he said, noting many view Clinton as untrustworthy. “You can’t change somebody’s character, but you can change the way a person presents himself.”

“The negatives will come down, the image is going to change,” Manafort maintained. “But Clinton is still going to be Crooked Hillary,” he added, earning a round of applause.

Speaking in a stifling hotel conference room overlooking the Atlantic, ringed with an alcohol bar, platters of shrimp, cheese and crudités, Manafort opened by addressing the elephant in the room: the suggestion that Trump is “running against the Republican National Committee,” with his criticism on the stump. “The answer is he is not,” Manafort said.

Manafort also sought to reassure RNC members that Trump would work with the committee and fundraise for it in a general election. He praised members of the committee as “experts” and “leaders” of their states whom the Trump campaign would rely on to craft general-election plans for their states. And he communicated Trump’s commitment to spend whatever is necessary to win the nomination and the White House.

“He’s told Rick and I that he will spend what is necessary to finish this up,” Manafort said.

Delivering a slide presentation, Wiley briefly presented RNC leaders with a rosy projection of an electoral map for a Trump candidacy, arguing Trump could put Democratic states in the Northeast and Midwest in play. “Can we win Illinois? I don’t know,” Wiley said, “But what we can do is make Hillary Clinton go to Illinois, make her spend money there.”

Manafort and Wiley have been holding small-group and one-on-one meetings with influential RNC members in hopes of softening the ground for cooperation in a potential Trump nomination. Most of the roughly 200 people in the room were not outright Trump supporters, and some RNC members said they had hoped to raise more concerns about Trump’s tone and tenor in private meetings with his staff.

Manafort and Wiley were joined by Trump endorser and former GOP candidate Dr. Ben Carson, who used his remarks to encourage the party to unify because of the high stakes in the race.

New Hampshire national committeeman Steve Duprey said the talk had helped to alleviate some of the party’s concerns about Trump. “They gave a great presentation about how Donald Trump expands the map for us,” he said. “I think it resolved some of the concern and angst that some members expressed.” 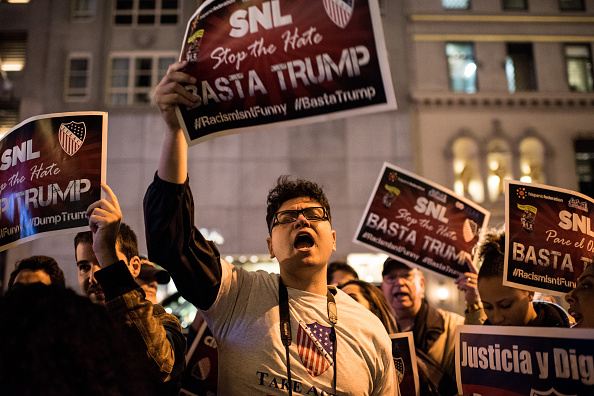 Poll: Latino Voters 'Enthusiastic' to Vote Against Trump
Next Up: Editor's Pick