The Murky History of the Ice Cream Cone

Here’s something to ponder if you happen to be waiting in line for Ben & Jerry’s Free Cone Day on Tuesday: Where do ice cream cones come from?

The exact origin of the combination of an edible wafer or waffle, the cone shape and the ice cream is unclear. Edible wafers date back centuries, and they were long served alongside ice cream as an accompaniment. The most popular cone invention stories locate ice cream cones at the 1904 World’s Fair, but they were almost certainly invented before that date and the actual story of who first used a rolled wafer to serve ice cream is a murky story.

An 1807 etching of the Parisian Café Frascati holds an early clue. The café was known for serving ice cream, and the lower right corner of the image shows a woman licking something out of a hand held container, which ice cream historian Robin Weir writes is the “first pictorial evidence for ice cream cones.”

Almost 40 years later, Charles Francatelli’s 1846 book Modern Cook described how to make “wafer-gauffres” filled with “filbert-cream-ice” to garnish a molded desert called “Iced Pudding a la Duchess of Kent.” (His “Iced Pudding a la Chesterfield” had a similar finish of ice-cream-filled wafer cones.) The accompanying illustration clearly showed the cone shape, and his gauffres recipe described shaping still-warm wafers into “small cornucopiae” before they cooled and became brittle, but these still aren’t quite the handheld cones of your youth, as they were intended mostly as a garnish. Towards the end of the century, Agnes B. Marshall wrote numerous cookbooks, including ones specifically about iced deserts, and this time the filled cone took center plate. Her 1887 Cookery Book included a recipe for “Cornets with Cream” that included the instruction that the cornets could “be filled with any cream or water ice,” and her 1894 book Fancy Ices detailed further recipes for cornets filled with ice creams—but, while they were a step closer to the current incarnation of the ice cream cone, they were still elegant deserts meant to be put on a plate and eaten with utensils.

In the second half of the 19th century, ice cream bought outside the home was served in a small glass container, called a “penny lick” for the price. You would lick the ice cream out of the glass and return it to the vendor to wash and reuse. This practice wasn’t necessarily sanitary, and it could cause delays if too many people wanted ice cream at the same time.

The solution: an edible container. Italo Marchiony, who later claimed he had been making edible cups to serve ice cream in New York City since 1896, filed a patent in 1903 for his own ice-cream-cup-making machine. The mold’s shape is something more akin to a cup than a cone, as was the “apparatus for baking biscuit-cups for ice-cream” that Antonio Valvona of Manchester, England had patented a year before.

Anne Funderburg’s history of ice cream describes seven origin myths for the ice cream cone, starting with the most common 1904 St. Louis World’s Fair story: that Ernest Hamwi, an immigrant from Syria, was making zalabia, a wafer dessert, next to an ice cream stand. Hamwi suggested the combination, which caught on. Hamwi continued to work in the business of ice cream cones, eventually opening the Missouri Cone Company. The International Association of Ice Cream Manufacturers named him the official creator of the ice cream cone in the 1950s. Still, other stories proliferated, including ones claiming Abe Doumar of Lebanon, Nick and Albert Kabbaz of Syria, David Avayou from Turkey, or Frank and Charles Menches of Ohio gave Hamwi the idea or invented the cone themselves. There’s no contemporary evidence to support any of the World’s Fair stories over another.

It remains unclear exactly which invention story is the true story. But, while the ice cream cone was probably not first invented at the 1904 World’s Fair, the fair did serve to popularize the cone as container, and the stories about the Fair do provide an early example of the ice cream cone recognizable for both its modern form and function. 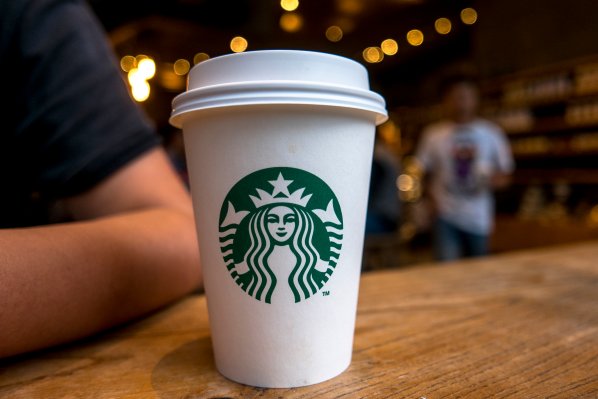 Starbucks Apologizes for 'Diabetes Here I Come' Joke on Customer's Cup
Next Up: Editor's Pick