A record warm winter drove sea ice in the Arctic to a record winter low, according to a new government report.

The sea ice over the Arctic expands and shrinks with the seasons, but it typically covers the most territory in late March, at the end of the Arctic winter—a point called the maximum winter extent. Preliminary satellite data from NASA shows that this year’s maximum winter extent—reached on March 24—was the smallest ever, with Arctic sea ice covering 5.607 million square miles (14.52 million square km). That’s more than 430,000 square miles (1.1 million square kilometers)—nearly three times the size of Montana—below the average level between 1981 and 2010.

This winter was the hottest on record in many places across the globe, with average temperatures 2.03°F (1.13°C) above the 20th century average, according to the National Oceanic and Atmospheric Administration (NOAA). Temperatures in the Arctic were as much as 16°C (29°F) above average, driving the ice melt. “It’s a lot easier to warm something that’s cold than something that’s already warm,” says Sean Sublette, a meteorologist at Climate Central.

Climate scientists attribute the season’s record temperatures to a combination of a particularly strong occurrence of the El Niño climate phenomenon—which raises ocean temperatures in the Pacific and changes air circulation to drive higher global temperatures—and the ongoing, mostly man-made climate change that has been heating the globe for decades.

Sea ice melt also causes its own set of problems as it modifies short-term global climate patterns. In the long-run, it also contributes to the very climate change that causes it as the water exposed by ice melt tends to absorb more sunlight than ice. 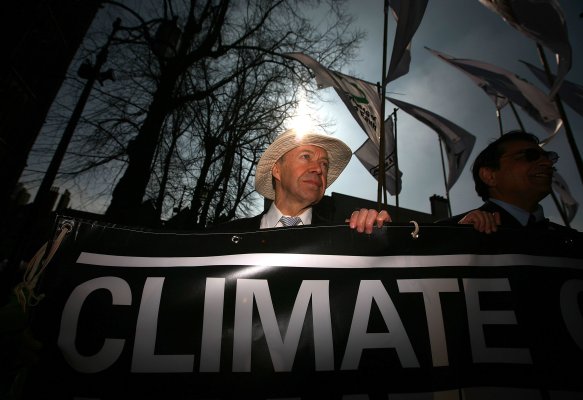 These Scientists Say Sea Levels Could Rise Much More Than We Thought
Next Up: Editor's Pick