In a speech billed as “an address on the state of American politics,” House Speaker Paul Ryan reviled the divisive tone of the presidential campaign, though he stopped short of condemning, or even naming, Republican front runner Donald Trump.

“In a confident America, we aren’t afraid to disagree with each other,” Ryan told a room filled with Hill interns from both sides of the aisle. “We don’t lock ourselves in an echo chamber, where we take comfort in the dogmas and opinions we already hold. We don’t shut down on people—and we don’t shut people down. If someone has a bad idea, we tell them why our idea is better. We don’t insult them into agreeing with us. We try to persuade them.”

Ryan’s speech comes as the Republican Establishment has stepped up efforts to stop Trump from reaching the 1,237 delegates needed to secure the nomination, or at least get him to curb his divisive rhetoric. Wednesday morning former Florida Gov. Jeb Bush endorsed Texas Sen. Ted Cruz and last week 2012 GOP nominee Mitt Romney called on Utah voters to support Cruz. Cruz, who trails Trump by 273 delegates after Tuesday’s voting, is seen as the last best shot at stopping Trump.

Read More: Transcript of Paul Ryan’s Speech on the State of American Politics

But congressional leaders, wary of the down-ballot implications of playing in electoral politics, have been more reserved in their criticism of Trump. Ryan, like most members of Congress, says he will support whomever the nominee is, including Trump. Instead, the leaders have been trying to encourage Trump to change his tone. Senate Majority Leader Mitch McConnell, who has sworn for the past year not to get involved in the campaign, last week called Trump and asked him to condemn and discourage the violence at his rallies. Ryan, who warned last week that divisions within the party could lead to a contested convention, took McConnell’s plea for civility to the next level with Wednesday’s speech.

“Our political discourse—both the kind we see on TV and the kind we experience among each other—did not use to be this bad and it does not have to be this way,” Ryan said. “Now, a little skepticism is healthy. But when people distrust politics, they come to distrust institutions. They lose faith in their government, and the future too. We can acknowledge this. But we don’t have to accept it. And we cannot enable it either.”

Trump blames the unrest on extreme left wingers and supporters of Democratic candidate Bernie Sanders, a charge Sanders hotly denies. Trump, who prides himself on the controversy, has said he’s considering paying the legal fees of one supporter who sucker punched a protester.

Democrats have been blasting their Republican counterparts for not doing more to stop, or rein in, Trump, calling many of his statements on Latinos, Muslims and African-Americans racist. “For too long, Senator McConnell and Speaker Ryan have tried to have it both ways, giving Trump a slap on the wrist each time he says something detestable, but always committing to support him at the end of the day,” Senate Minority Leader Harry Reid said in a speech last Thursday. “This is precisely the kind of moral cowardice that enabled the rise of Trump.”

In response to Ryan’s speech on Wednesday, Reid blasted Ryan for supporting “a racist demagogue for president.” “Speaker Ryan’s words will ring hollow until he backs them up with action and withdraws his support from Donald Trump,” Reid concluded.

Added House Minority Leader Nancy Pelosi’s spokesman Drew Hammill: “The Speaker’s ‘Year of Ideas’ has been marred by the same level of internal Republican dysfunction that dogged his predecessor while a runaway Republican primary constantly reminds the American people of the extreme policy positions advocated by so many in the House Republican Conference.”

Trump, though, has shown little sign of toning down anything. In the wake of the Brussels attacks on Tuesday, Trump reiterated his controversial call to suspend all visas to Muslims coming to America. And those sensibilities seem to be spreading. Cruz later that day called for increased politics of Muslim neighborhoods, prompting an outcry from Muslim and minority groups against racial profiling.

Ryan, speaking from the Ways & Means Committee hearing room, the panel he used to chair, sought to harken back to a time in American politics when the dialogue was less polarized. “We always held ourselves to a higher standard of decorum. We treated each other with respect. We disagreed—often fiercely so—but we disagreed without being disagreeable,” he said. “It almost sounds like I’m speaking of another time, doesn’t it? It sounds like a scene unfamiliar to your generation.”

In the fight for the future of the Republican Party, while Ryan spoke of striving “to raise our gaze and aim for a brighter horizon,” all its congressional leaders seem to be hoping for these days is a modicum of civility. 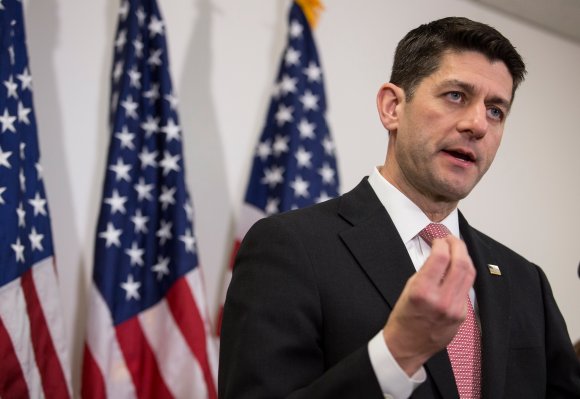 Read Paul Ryan's Speech on the State of American Politics
Next Up: Editor's Pick