Republican presidential candidate Donald Trump speaks to the media during a news conference at the construction site of the Trump International Hotel at the Old Post Office Building in Washington, on Mar. 21, 2016.
JIM BOURG—REUTERS
By Tessa Berenson

Donald Trump once suggested that he might appoint his sister, a federal appeals court judge, to the Supreme Court, though he later said he was joking. Just to be clear, he went even further at a debate, naming two federal judges appointed by George W. Bush as potential high court nominees.

Now that President Obama has nominated Merrick Garland, Trump is going even further, essentially offering a deal to conservatives nervous about his potential influence on the Supreme Court.

Speaking at the construction site for his new hotel in Washington, D.C., Monday, Trump said he will make a list public in the next week of 10 conservative judges that he would consider nominating to the Supreme Court. If elected, Trump said, he would only pick from that list, which is being made in consultation with the conservative Heritage Foundation.

“I’m going to submit a list of justices, potential justices of the United States Supreme Court, that I will appoint from the list,” Trump said. “I won’t go beyond that list. Some people say maybe I’ll appoint a liberal judge. I’m not appointing a liberal judge.”

By “some people,” Trump means Texas Sen. Ted Cruz, his top rival for the Republican nomination. Cruz has repeatedly warned that Trump can’t be trusted to appoint a conservative justice, part of his overall message casting doubt on Trump’s Republican credentials.

The argument over the next Supreme Court justice has become more urgent now that President Obama has announced his pick, a widely respected federal judge with centrist credentials and a blank record on abortion rights. With Senate Republicans vowing not to even hold hearings on Garland, his best bet for confirmation remains the lame-duck session after the November elections.

So Trump, who likes to boast that he knows how to make a deal, is offering conservatives a pretty sweet one: He’ll give up some of the independence that a president normally has on judicial nominations if they’ll stay on his side.

He also hinted that a third-party campaign, which some anti-Trump Washington conservatives have considered mounting in recent days, could reduce the court’s conservative bloc by helping Hillary Clinton win.

“If they want to embrace this, that’s great,” Trump said. “And let me tell you, if they don’t win, they’re going to have probably four, and could even be five, Supreme Court justices approved that will never allow this country to be the same. It’ll take 100 years, but that won’t work. So they better be careful. And they certainly should be careful with third party stuff. … A third party means that the Democrats are going to win almost certainly. You can’t be that spiteful. You can’t be that spiteful, because you’ll destroy the country. Third party will destroy the country.”

During his visit to Washington, Trump noted that he has spoken to House Speaker Paul Ryan and Senate Majority Leader Mitch McConnell in recent days, saying both conversations went well.

“They can play games and they can play cute, I can only take them at face value,” he said. “I understand duplicity, I understand a lot of things. But [Ryan] called me last week, he could not have been nicer. I spoke to Mitch McConnell, he could not have been nicer. If people want to be smart, they should embrace this movement. … If they don’t want to be smart, they should do what they’re doing now and the Republicans are going down to a massive loss.”

Trump also met with various Congressmen and lobbyists Monday morning who had been against of his candidacy in hopes of dampening Establishment opposition. Trump declined to say exactly who attended the meeting other than Alabama Sen. Jeff Sessions, who has endorsed him, and “some of the great people in Washington.” But Trump said it was “a great meeting.” 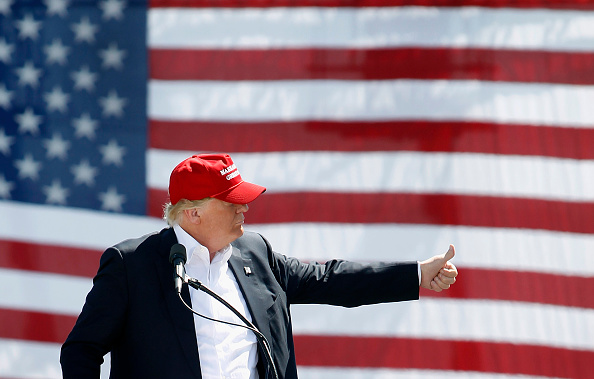