February Had the Most Above-Average Temperatures on Record

A drop of water falls from a melting icicle on Feb. 1, 2015 in Marktoberdorf, southern Germany.
Karl-Josef Hildenbrand—AFP/Getty Images
By Justin Worland

Global temperatures in February were the most above average since weather record keeping began nearly 150 years ago, bringing the world the closest it has ever been to what scientists consider dangerous levels of warming, a federal government agency confirmed Thursday.

The average temperature across the globe in February reached 13.3°C (56°F), according to a report from the National Oceanic and Atmospheric Administration (NOAA). That’s 1.2°C (2.2°F) higher than the average global temperature in February during the 20th century. NOAA’s findings confirm those released earlier this month by NASA and the Japan Meteorological Agency that both show February as the most unusually hot month on record.

“If you look back in the historical temperature curve, it’s hard to find a monthly spike that was as large as this one,” says Michael Mann, professor of atmospheric science at Pennsylvania State University. “That’s how we will see the effects of climate change: the extremes will become more extreme and bring the world the closest it’s ever been to dangerous warming.”

Read More: See How Your City May Be Affected By Rising Sea Levels

Most scientists identify a rise of 2°C (3.6°F) above the level global temperatures were at before humans began putting large amounts of carbon dioxide into the atmosphere as the point at which the effects of global warming become essentially irreversible, causing lasting damage. Arctic ice will melt away at an unsustainable rate and some island countries will begin disappearing into the ocean.

The 2°C marker has also been enshrined into public policy and international climate deals—including the Paris Agreement—as a target that should not be exceeded. The February temperature record suggests that it may be harder to meet those targets without a dramatic acceleration in efforts to reduce global carbon emissions

“If we continue to burn fossil fuels and increase the concentration of greenhouse gases in the atmosphere, we will assume that this level of warmth will be perpetual,” says Mann. “This is a reminder that we need to need to decarbonize.”

Climate scientists are quick to note that ordinary weather variability contributed to February’s record high, on top of the effects of long-term global warming. For one, the world still in an El Niño—a periodic climate phenomenon that increases global temperature and precipitation patterns—which played a significant role in driving the extreme heat. And beyond that temperatures are expected to fluctuate from month-to-month.

An increase of a couple degrees won’t feel like a lot for the average person walking outdoors, but it makes a dramatic difference in the natural world that surrounds us. Higher temperatures confuse plants and insects—leading to early springs and disruptions in ecosystems. Ice also melts at higher rates, driving rising in sea levels and eliminating habitats. And of course that 1.2°C (2.2°F) average temperature increase in February masks far more extreme variations. “Sometimes it’s hard for humans to pick up on it,” says Sean Sublette, a meteorologist at Climate Central. “You’ll start to see nature responding to this more and more.”

The study comes as new research from the National Academy of Sciences shows that climate change contributes to extreme weather events like drought and flooding. And, while the exact links remain unclear, extremely hot months like February raise the risk that the world will be caught off guard by extreme and unexpected events.

The entire globe was hot in February, but some places were hotter than others. February ranked as the seventh warmest on record in the United States, but that didn’t stop the country from experiencing the warmest winter on record as a whole. The average U.S. winter temperature was 2.7°C (36.8°F)—that’s 2.6°C (4.6°F) above average, well past the 2°C limit. In parts of Africa, the warmest February since 1910 contributed to ongoing drought that has left millions food insecure. And some areas in the Arctic experienced temperatures up to 16°C (29°F) above average leading to dangerously low levels of sea ice.

And while the year has only just begun, climate scientists have already predicted that 2016 will trump last year as the warmest on record. The warmest months of El Niño tend to fall in the spring following the pattern’s high period and the coming months would need to be abnormally cool to make up for the hot winter. They almost certainly won’t be. 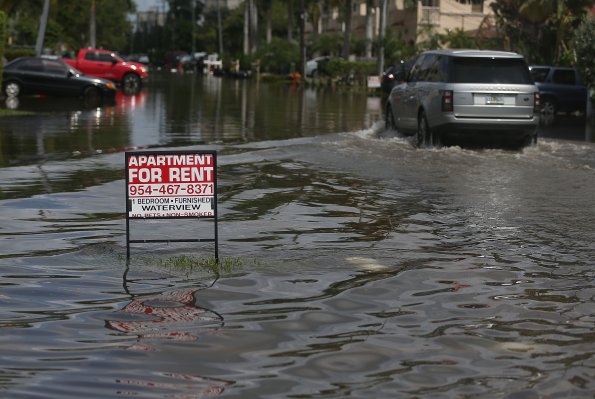 See How Your City May Be Affected by Rising Sea Levels
Next Up: Editor's Pick