A sign post leading to the Ziika forest is seen near Entebbe, Uganda, Jan. 29, 2016. The Zika virus was first discovered here by scientists in April 1947 after testing a macaque monkey.
Isaac Kasamani—AFP/Getty Images
By Aryn Baker

The Zika virus, which has been linked to an increase in Brazil of a birth defect called microcephaly, was first identified in a Ugandan forest in 1947. Scientists now suspect that it is endemic across most of the African continent. Which raises the question: why aren’t we seeing a similar surge of microcephalic babies in Africa?

Read More: Here Are the Other Zika Problems Experts Are Worried About

The answer to that question could provide vital clues about a virus that largely remains a mystery, nearly 70 years after its discovery. Does the mosquito-borne disease actually cause the birth defects, and if so, how? What other effects might it have? Did it evolve into a more virulent form as it made the long journey from Africa to South America, and if so, how much more dangerous is it now? 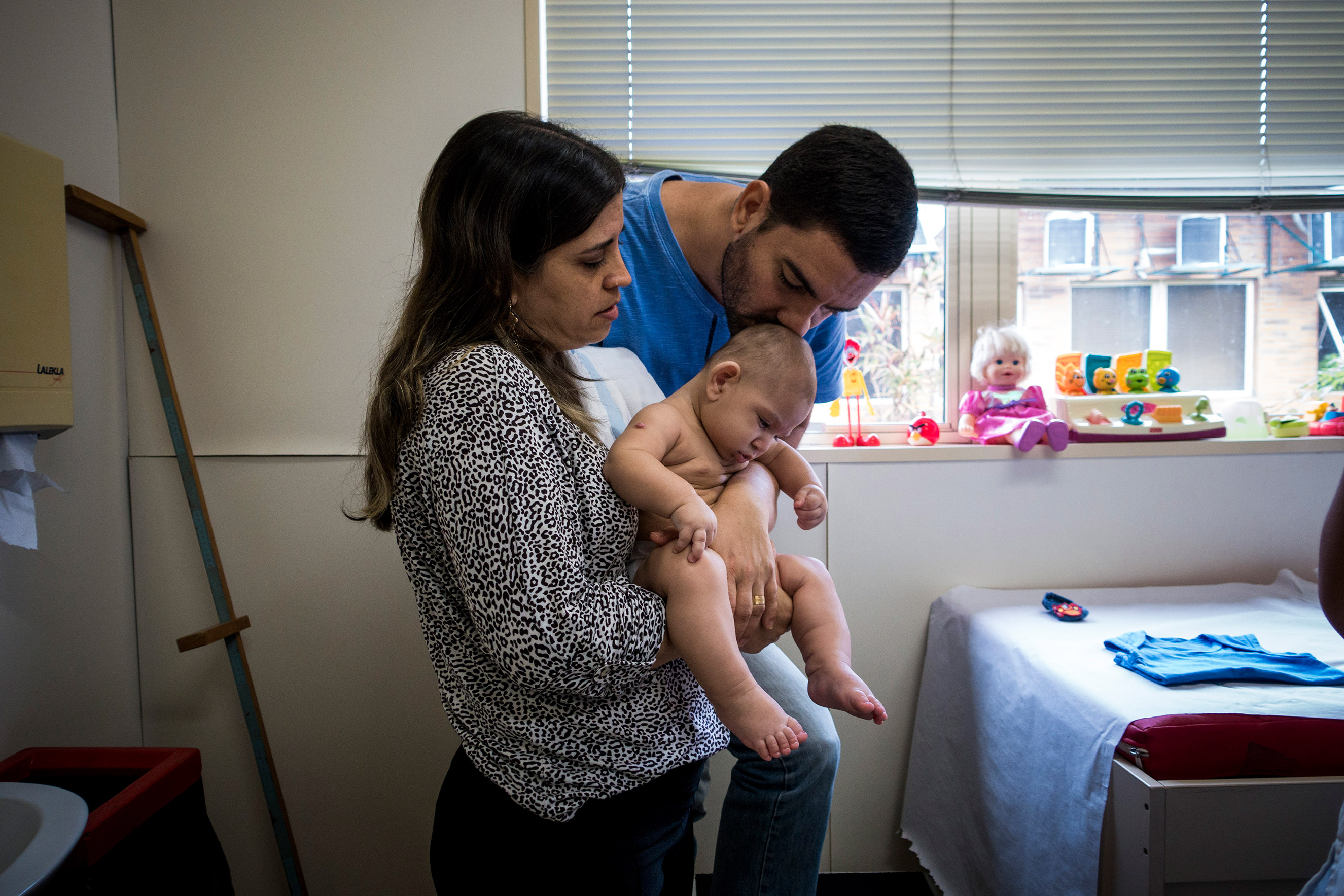 Isabel and Moises Albuquerque and their son son at the Associacao de Assistencia a Crianca Deficiente, a rehabilitation center for disabled children, in Recife, Brazil, Feb. 1, 2016.
Sebastian Liste—NOOR for TIME 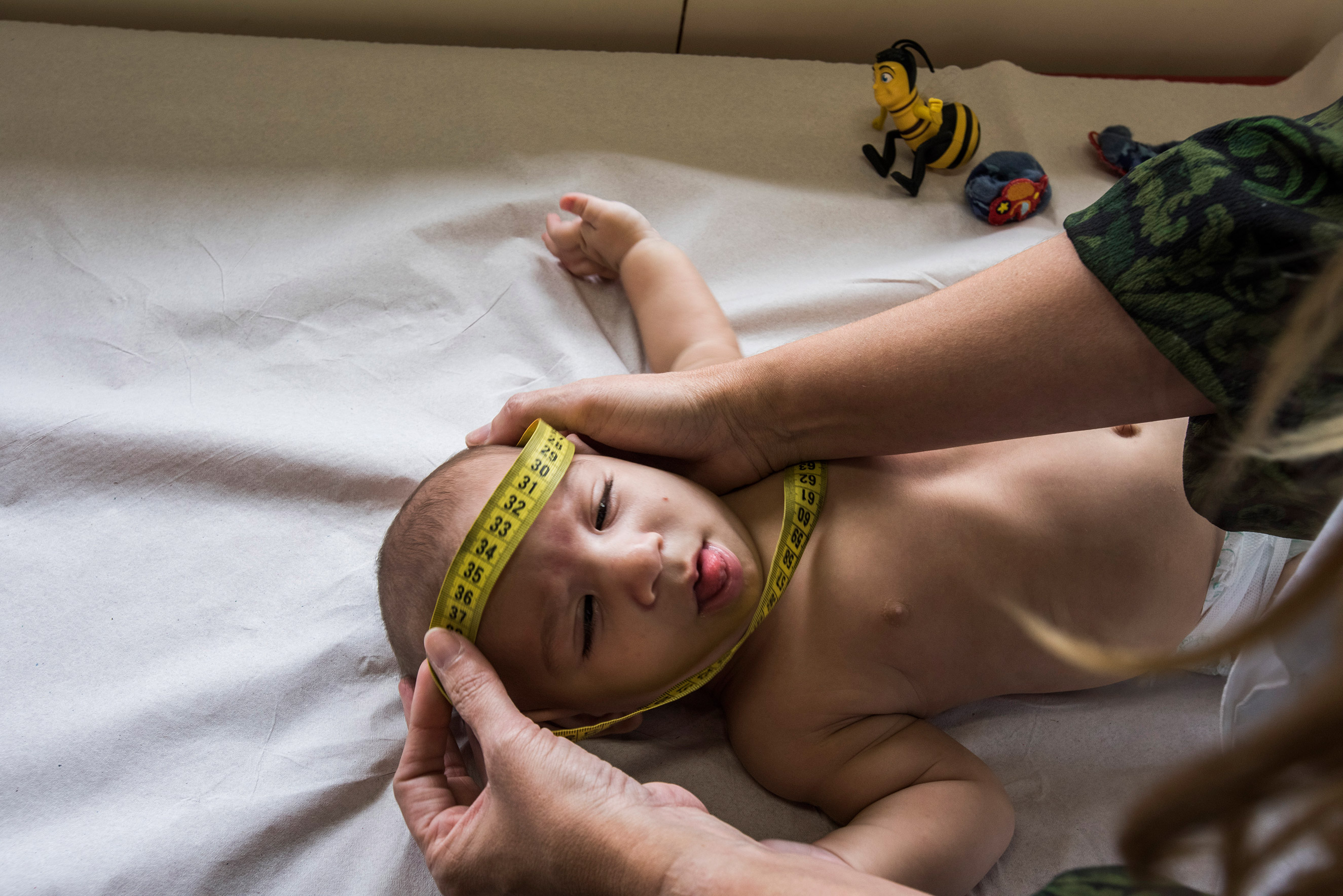 Dr. Vanessa Van Der Linden, a neurologist at the Associacao de Assistencia a Crianca Deficiente, measures the head of a baby with microcephaly in Recife, Brazil, Feb. 1, 2016. This center has seen 69 children with microcephaly so far.
Sebastian Liste—NOOR for TIME 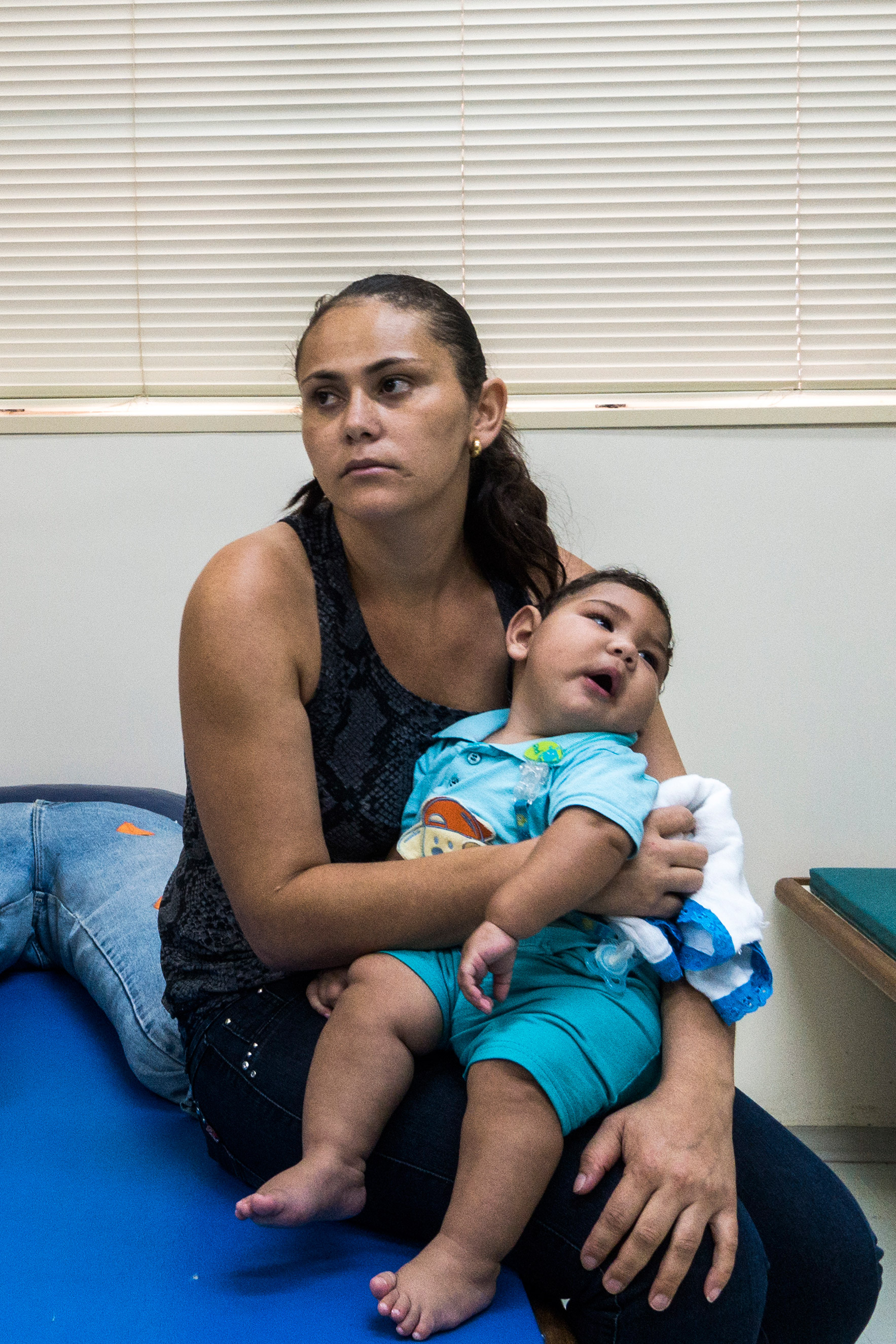 Adriana Cordeiro da Silva, 29, and her seven-month-year-old son Jose Bernardo, who was born with microcephaly, at the Associacao de Assistencia a Crianca Deficiente rehabilitation center in Recife, Brazil.
Sebastian Liste—NOOR for TIME 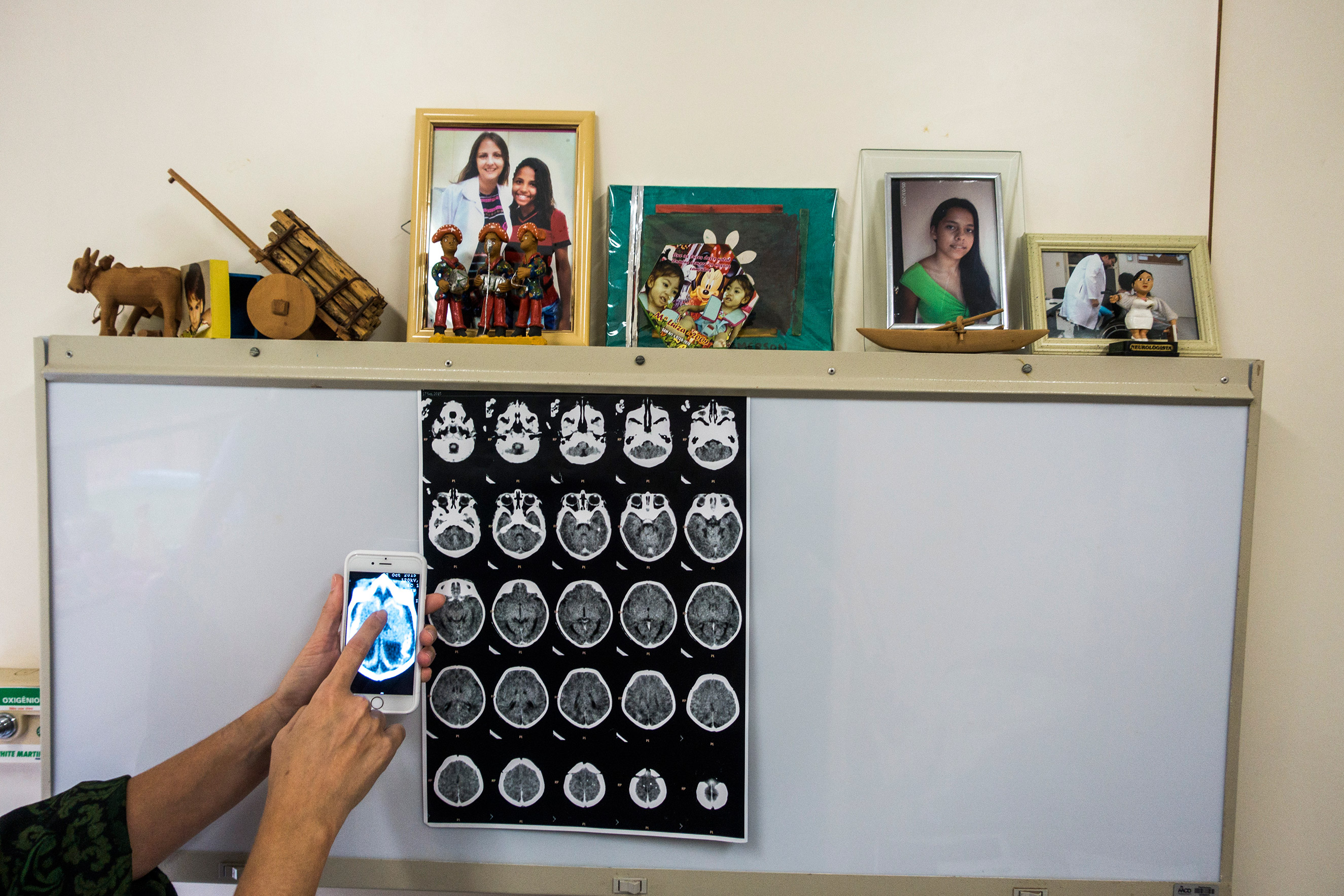 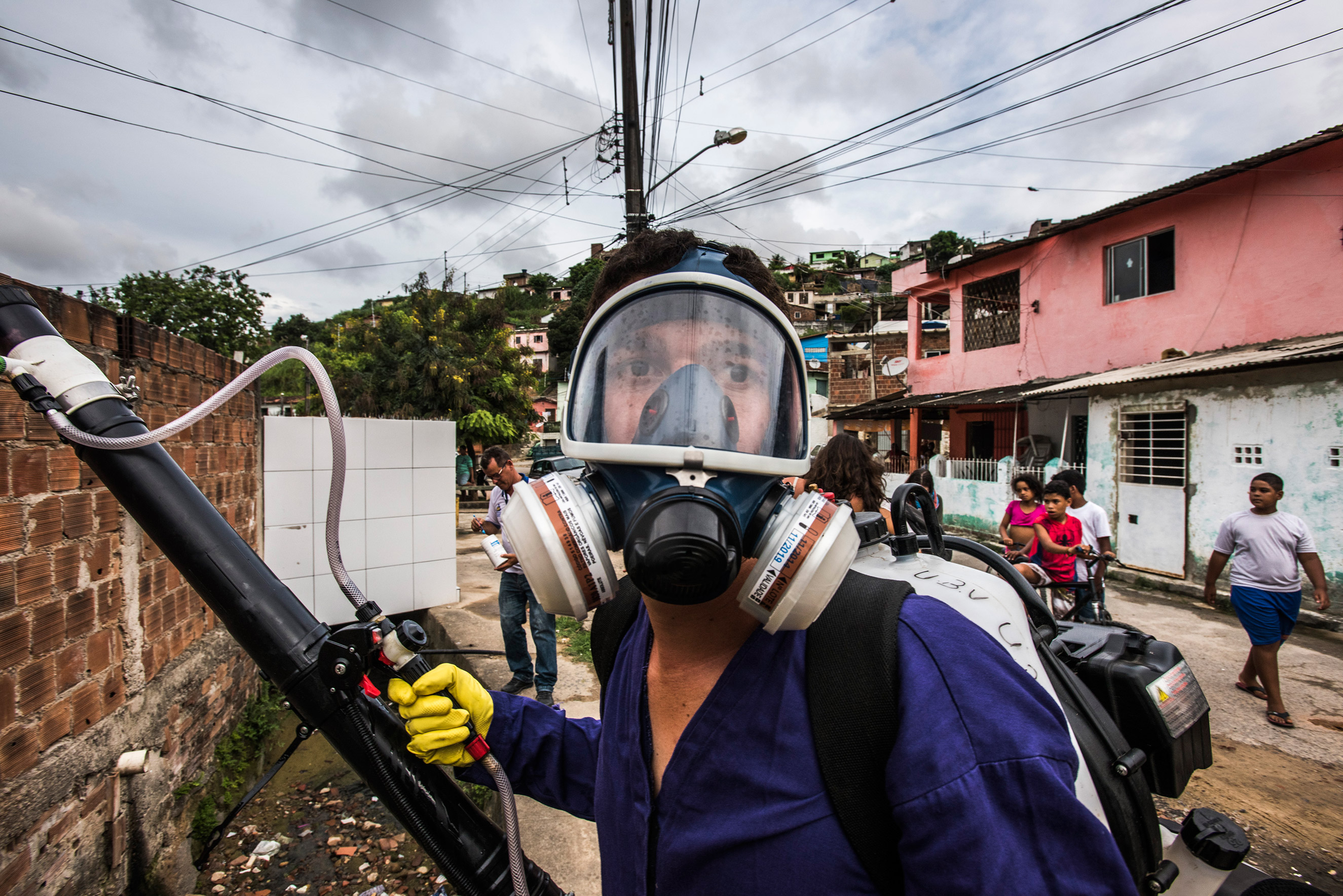 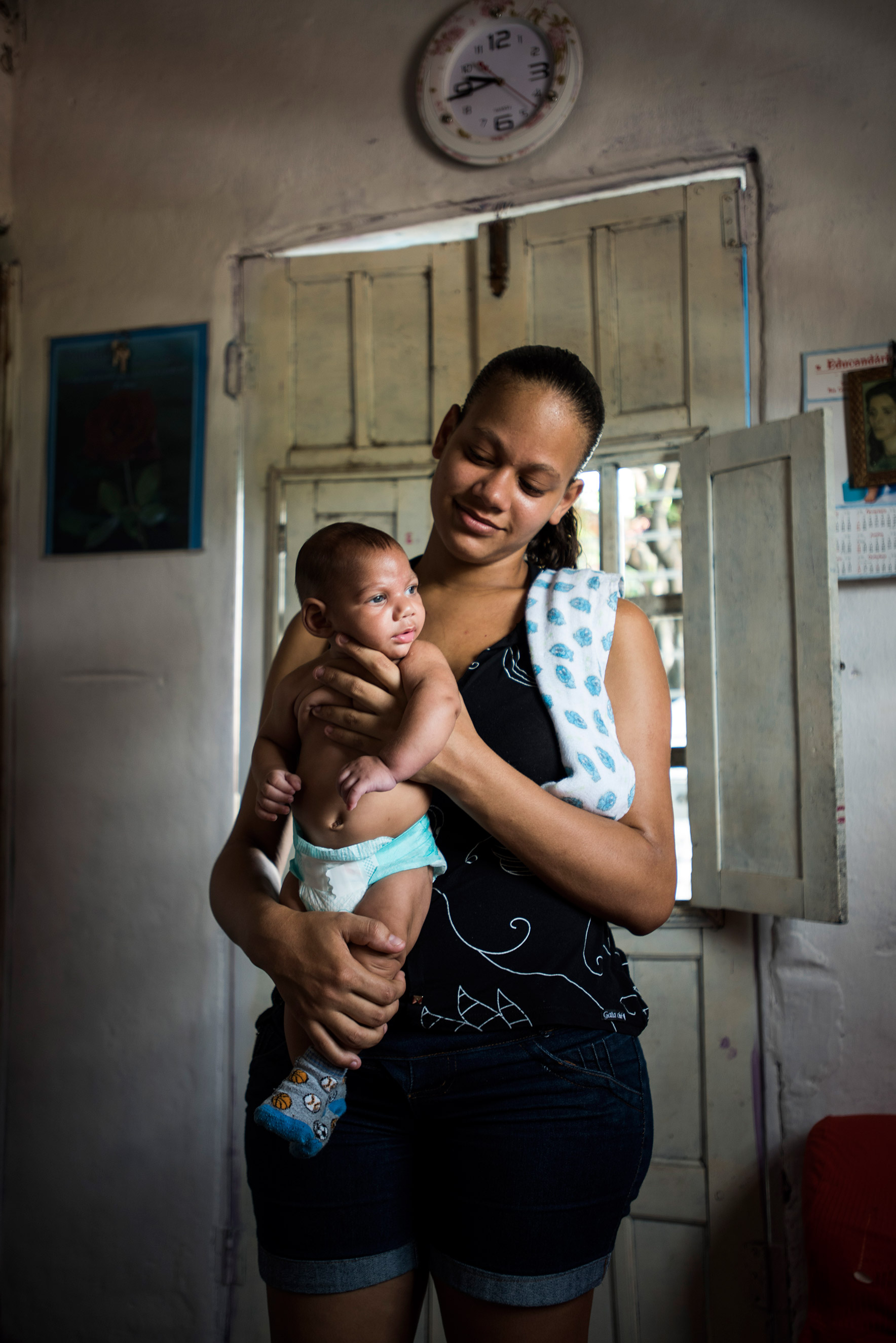 Juliana Diniz da Slva, 22, with her three-month-old son, Pedro Henrique da Silva, in her house in Nova Descoberta, a favela in the outskirts of Recife, Brazil, Feb. 2, 2016. When she was seven months pregnant, doctors discovered the baby had the rare birth defect.
Sebastian Liste—NOOR for TIME 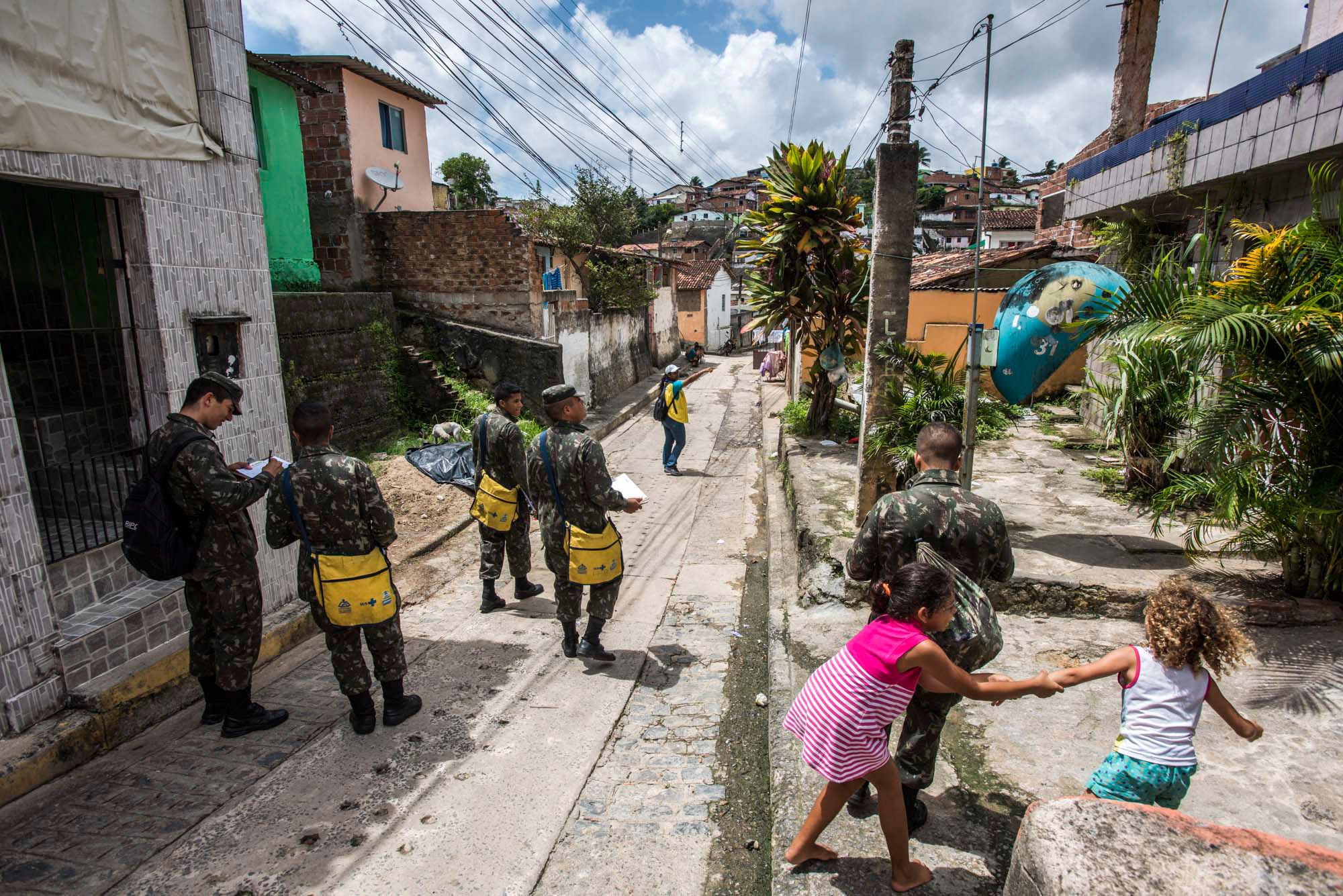 Members of the military walk the streets of the Nova Descoberta neighborhood in a campaign to prevent the transmission of the Zika virus in Recife, Brazil, Feb. 2, 2016.
Sebastian Liste—NOOR for TIME 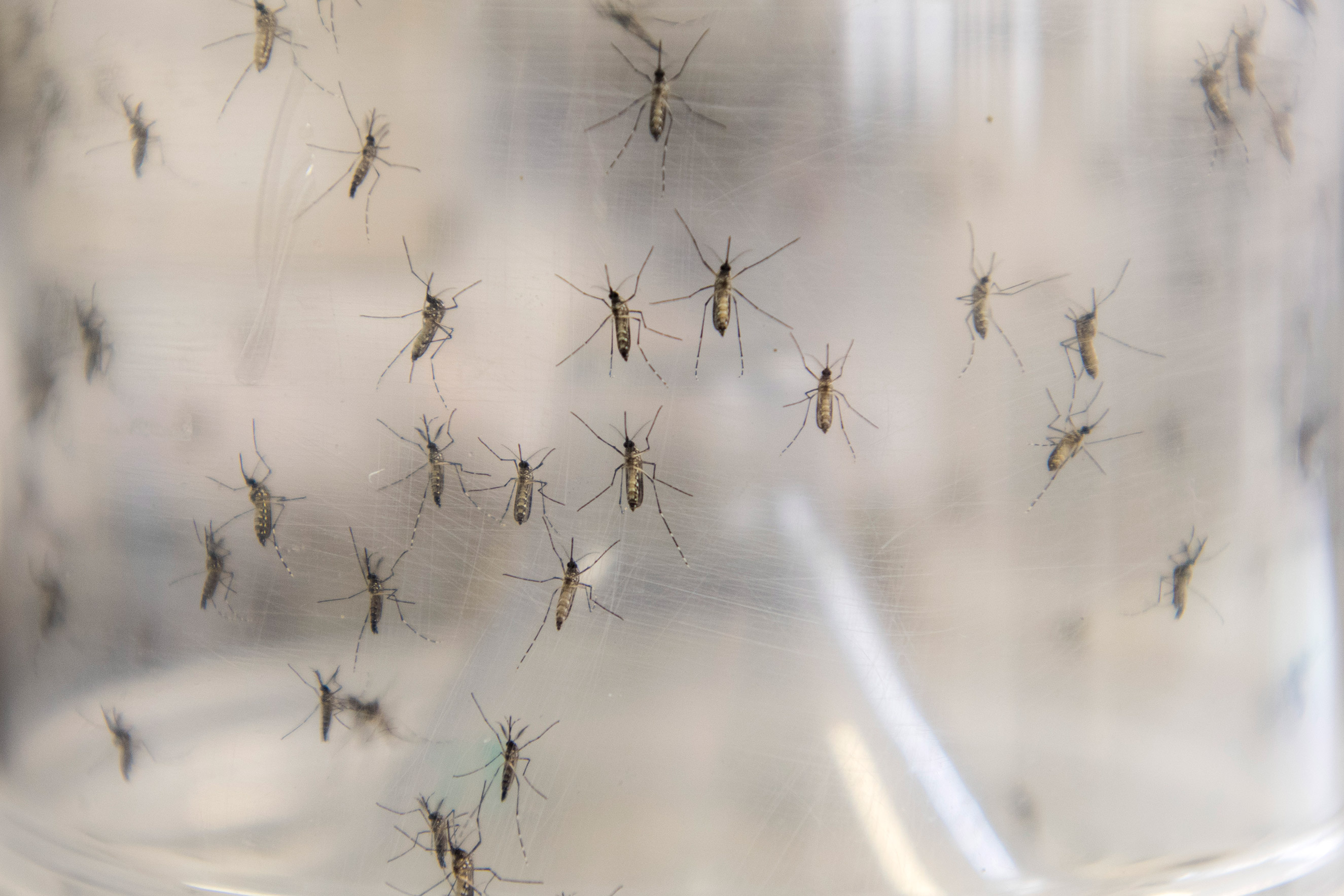 Aedes aegypti mosquitoes are seen at the Fiocruz Institute in Recife, Brazil, Feb. 2, 2016.
Sebastian Liste—NOOR for TIME
1 of 8
Advertisement

The fact that there is no documented evidence of Zika-linked microcephaly in Africa has caused many scientists to think harder about the connection between the virus and the birth defect. “I have never seen anything in any literature from Africa describing these kinds of severe manifestations linked to Zika,” says Scott C. Weaver, the scientific director of the Galveston National Laboratory in Texas, and an expert on human infections and immunity. “So what we really don’t know, and need to find out, is whether this virus has always had this capacity to produce these outcomes or whether the virus changed, or whether there is something different about the people that it is infecting in the Americas.”

How Community Health Workers Could Save 30 Million Lives By 2030

Do I Still Need to Worry About the Zika Virus?

On the surface, comparing the impact of the sudden outbreak in Brazil to the virus’ decades-long existence in Africa is “sort of like comparing apples to oranges,” says Dr. Michael Edelstein, an epidemiologist with Chatham House’s Centre on Global Health Security in London. Medical reporting is much stronger in middle-income countries like Brazil than in desperately poor African countries that have limited health programs and major health challenges, so it could simply be a question of missing data. “The ability to detect public health events in Brazil in 2016 is much better than it was in Uganda in 1947,” says Edelstein.

It’s notable that the mosquitoes that transmit Zika in Africa prefer to live in sparsely populated forest areas, unlike the Aedes aegypti mosquitoes transmitting the virus in South America, which thrive in densely packed cities. So while Zika is believed to have infected 1.5 million in South America, the biggest, and only, recorded outbreak in Africa was in Gabon, in 2007, which infected an estimated 20,000 people. Statistically that’s too low to detect rare complications like microcephaly, says Edelstein.

Viruses or chemical exposure or even alcohol can cause microcephaly, and it occurs around the world. So in Africa’s rural areas, where the number of births is low, even a 300 percent increase in microcephaly cases, which would trigger an alarm in an urban hospital, could pass unnoticed. “It could mean an increase from three to five cases a year,” says Edelstein. “Unless you are looking for it, you are unlikely to find it.”

Helen Lazear, an assistant professor in the department of microbiology and immunology at the University of North Carolina School of Medicine in Chapel Hill, agrees, but notes, there might be other factors at play. “There could be something very different about the virus strains circulating in Africa and in Brazil,” she says. Scientists are genetically sequencing different Zika strains from Africa, the South Pacific and South America, and they have identified a small number of changes in the genome as the virus traveled the globe. “What we don’t know is if those few changes are just random—viruses do change over time—or if those changes actually impact the virulence of the virus.”

That’s what Weaver’s team at the Galveston National Laboratory plans to work on next. If a genetic sequence is like a recipe, it’s impossible to tell how different recipes work together until you try them. By infecting lab animals with different strains of the virus, scientists will be able to figure out which genetic mutations make a difference in how the virus works, and whether those mutations might cause microcephaly. “If the virus has, over time, become more efficient at replicating in humans [that] could also be a reason why microcephaly rates would increase,” says Weaver. “The more efficient the virus is at replicating itself, the greater the amount of virus there is in the blood stream, and the more likely it is to cross the placenta into the fetus,” which could cause developmental problems.

But the most likely explanation for why Zika hasn’t caused as many problems in Africa as it has in Brazil also provides the most hope. Africans have had decades to build up a resistance to a disease that most South Americans are encountering for the first time. “Virtually everyone in South America is immunologically naive,” says Weaver. “Combine that with large, densely packed cities full of Aedes aegypti mosquitoes and you have all the fuel you need for a major epidemic like this one.”

That in turn means a greater likelihood of seeing an increase in rare complications such as microcephaly. But in Africa, there is far less concern, even if there is another outbreak down the line, says Weaver. “If there is regular circulation in Africa of Zika, it may even be that many women, once they reach childbearing age, have already been infected and are immune.” That provides hope, and a template, for future vaccine development.