After a drug cartel left severed heads in town plazas and discos, the Catholic priest Gregorio Lopez realized that he could no longer be silent. From the pulpit in his native state of Michoacan, in southwestern Mexico, he condemned the bloodshed and urged his flock to stand up to the gunmen. Lopez, who is known as “Father Goyo,” earned a series of death threats for his courage, and he took to giving mass in a bulletproof jacket.

“I saw how they were killing my friends, my brothers, my sheep, and as the pastor I have the obligation to be speaking out,” Lopez told TIME after a mass in 2014 when the death threats were most frequent. “If I do nothing for my sheep I am not a pastor. If a dog bites your children, and you do nothing then you are worse than the dog.”

Lopez has since taken a sabbatical from giving mass but continues to serve in the Church. Photos of him handing out the holy bread in a bullet proof jacket gained national attention, showing how that even the country’s biggest religion couldn’t remain inviolate from the cartel violence that has ravaged Mexico for a decade.

The drug war has been a troubling challenge for the Church in Mexico, where 82 percent of people profess to be Catholic. Cartel gunmen have beaten and murdered clerics, such as in 2014 when assassins killed a priest from Uganda in Guerrero state and left his corpse in a mass grave. Some local newspapers said the gunmen had targeted the priest John Ssenyondo because he refused to baptize the son of a trafficker, but his diocese said they didn’t know the motive. At the same time, drug traffickers have built chapels and given donations to churches, known here as “narco alms.” In sermons and even one video campaign, the Church has also tried to persuade cartel killers to repent.

Pope Francis is shining a new light on this problem in his first official visit to Mexico, beginning Feb. 12, in which he will travel to some of the country’s most troubled areas, including Michoacan and Ciudad Juarez, once the most murderous city on the planet. These choices contrast with the last papal visit in 2012, in which then-Pope Benedict XVI stuck to the more secure Catholic bastion of Leon state. But Francis, the first Latin American pope, says he wants to confront Mexico’s problems—not ignore them. “The Mexico of violence, the Mexico of corruption, the Mexico of drug trafficking, the Mexico of cartels, is not the Mexico our Mother wants,” the Pope said in video released by the Vatican last week.

Francis’ words could lead Mexican bishops to take a harder stance against cartels. While provincial priests such as Lopez have confronted violent gangsters, at great personal risk, the high-ranking clerics of Mexico City and Guadalajara have been more timid in their positions. They condemn violence generally, but they have not addressed traffickers by name or excommunicated them.

The Church in Mexico also ran one video campaign called “Hermano Narco” or “Brother Narco” which encourages forgiveness as a pass to peace. One such episode shows a 13-year old girl cowering under her bed as gunmen brutally murder her parents. But later in church, the orphan walks up to the sombrero-clad head of one of the killers and gave him a hug. “Many say you’re bad and you should be killed,” the girl tells him. “But maybe they did the same thing to your parents, or they never hugged you.” The film was played in Mexico City’s metropolitan cathedral and on TV as well as the Internet.

The Church has also suffered criticism for receiving drug-money donations, a practice condemned in a 2010 editorial in the Catholic Church’s official newspaper. “There is suspicion that benefactors colluded with narco traffickers have helped with money, from the dirtiest and bloodiest business, in the construction of some chapels,” it said.

One such chapel was built in the city of Pachuca, once home to Heriberto Lazcano, head of the ultra bloody Zetas cartel. “Donated by the family Heriberto Lazcano Lazcano,” reads a plaque in the chapel. “Lord, hear my prayer, attend to my pleas, answer me, you that are faithful and just.” The Zetas are blamed for atrocities including the massacre of 72 migrants in 2010, and a mass grave with 193 corpses in 2011.

Religious scholar Elio Masferrer says that bishops here could take a harder stance by kicking drug cartel members out the Church. He points to the example of Pope Francis traveling to southern Italy in 2014 and excommunicating members of the Italian Mafia. “The hierarchy of the Church in Mexico has been timid when it comes to narco traffickers but that could change,” Masferrer said. “An action such as excommunicating them could have a significant impact.” With Pope Francis making a series of bold moves, including softening the approach to gay and divorced Catholics, and already taking action against the mafia, such a bolder stance on Mexico’s cartels looks increasingly likely. 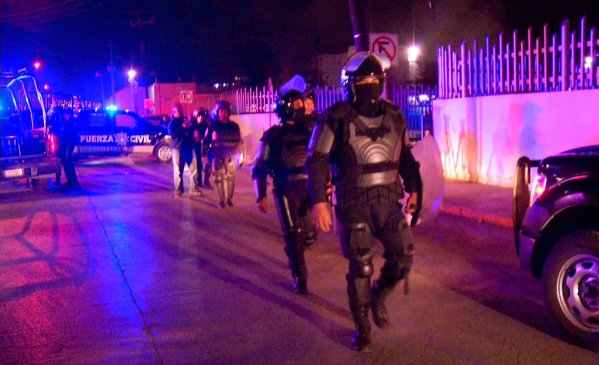 At Least 52 Dead in Mexico Prison Riot
Next Up: Editor's Pick