This year Ash Wednesday falls just half a week before Valentine’s Day. Coincidentally, a new study has found that guys who attend religious services regularly are happier in their relationships than those who don’t, even if their partners don’t go.

Women who head to church without their partner, however, are more likely to be miserable about their relationship than women who don’t go to any religious services at all.

The findings, released by the Institute for Family Studies, a pro-marriage organization, using figures from the 2006 National Survey of Religion and Family Life, also suggest that couples who pray together and who have friends who attend services with them report being happier with their relationship than those who don’t.

Read More: How to Improve Your Relationships With Others

Previous studies have shown that couples who subscribe to a religion are about as likely to divorce as others (maybe more so if they’re evangelical). Other studies have countered that people who are actually observant—as measured by church attendance—rather than nominally religious, are more likely to stay together.

This new study shows, however, that the differences between the sexes are quite stark. More than 40% of couples in which the woman goes to church solo are unhappy, compared to only 22% of couples in which either the man goes or they both go. If neither partner attends a service regularly, there’s about a one-in-three chance that they are not getting on as well as they’d like. (The study only polled heterosexual couples, and only really included Christian denominations. It also controlled for marital status, education, denomination, sex, age, presence of children and region.)

Why are men of faith happier with their partners? Bradford Wilcox, the study’s author, has a theory: churches/temples are the only places men are encouraged to think about their spouse and girlfriends. “Men who attend church, with or without their partner, may especially benefit from the stress that religious institutions often put on fidelity, commitment, and emotional expressiveness,” he says.

Conversely, women who attend services may be left feeling especially isolated by the emphasis on relationships, or may even be at church because they are seeking help with a troubled marriage. Wilcox hints they may also be coveting their fellow worshipers’ godly men. “Women who attend alone may be disappointed by how their partners stack up, compared to what they see among their peers in shared-faith marriages and relationships,” he says.

And what is it about going to church that makes couples happy? It might have nothing to do with faith. The study found that if more than half of the couple’s friends also went to church with them, they were 11% more likely to report being happy. So it could be about a sense of belonging to a community. “Some of the benefits of religious participation appear to be temporal, not spiritual,” says the study, “and hold even for churchgoers who may be uncertain about their own devotion.”

Couples who prayed together were the most likely to say their relationship was going well. Again the researchers can’t explain why with a high degree of confidence. Since articulating hopes and problems aloud, to an unseen being, in front of another person, requires a high tolerance for vulnerability, it stands to reason that couples who pray with each other are reasonably close already. It could also be that prayer brings with it a heightened sense of emotional intimacy or promotes more reflection on the relationship. 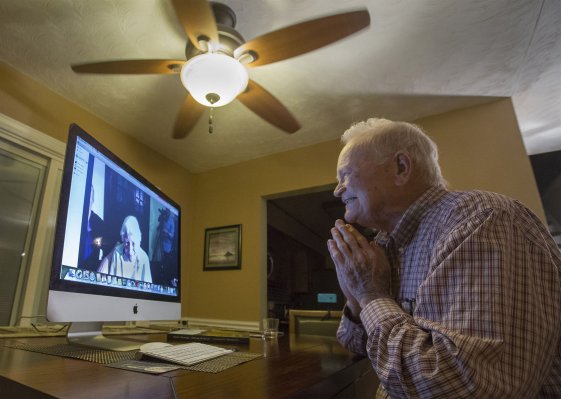 World War II Sweethearts Reunite After More Than 70 Years
Next Up: Editor's Pick