The 2016 Republican Primary, as Told by Donald Trump

Donald Trump appears with supporters Diamond and Silk at benefit and rally for Wounded Warriors, a charity organization for Veterans, at Drake University in Des Moines, Iowa, on Thursday, Jan. 28, 2016. The event was timed to coincide with the Republican debates on Fox which he declined to attend.
Natalie Keyssar for TIME
By Philip Elliott

When Donald J. Trump rode his gold-plated escalator down to the lobby of his Manhattan skyscraper, hundreds of cameras documented his entrance to the race back in June. They all thought him a loser. It’s what Trump expected from the scum manning the cameras and taking notes. “Some of these guys are as dumb as a rock,” he said Tuesday night, looking back at a story that still lacks an end.

Now, a day after the first voters in the country weighed in during the Iowa caucuses, Trump is recapping how he has gotten to this point—and offering, in his view, what comes next. Welcome to the history of this 2016 race, told through the lens of a billionaire businessman who thinks himself a victim and never a bully, a shrewd first-time candidate who doesn’t get enough credit, a leader of a movement that is only now getting its due.

In Trump’s mind, it’s an epic tale that is just getting good. After all, Trump doesn’t do mediocrity.

Trump decided to walk his fans through this narrative on a series of indoor tennis courts in an upscale town in southern New Hampshire. He claimed 5,000 people were packed under the tents, both here and at an overflow set of green courts next door. (The fire code document caps both rooms at a combined 3,000, and there were open spaces in both spaces.) That doesn’t diminish his crowd prowess. There were fire pits places along the security lines, to keep supporters warm as they snaked through a parking lot. “Tremendous!” Trump gushes.

Not 24 hours earlier, he was on the stage in West Des Moines, Iowa, offering a three-minute series of comments about the state’s caucuses, which proved polls putting him atop the field faulty. Trump came in second because crowds at his caucuses sights were not fabulous.

A day later, he was back to talking. “They said don’t go to Iowa. You don’t play there,” he remembers his advisers telling him. “I went there. I think we did really well.” Trump is not one to be told he cannot do something.

As he reflected more on Iowa—which either left him wounded or more determined to prove his critics wrong, depending on the telling—he also had a series of claims that were not exactly knowable. For instance: “We would have broken the world record” had he not skipped a Fox News debate last week. “I think this they would have had 26 to 28 or 29 million people (watching on TV).” There’s no way of knowing that.

He also claimed he broke history in the caucuses. “We got the biggest vote in the history of a primary in Iowa by, like, 60,000 people extra. I’m not going to say that was me, but it was me.” Maybe. Or maybe it was Ted Cruz’s well-oiled political machine that drove out Evangelicals. Either way, Trump made it sound like those voters showed up only to caucus for him. If that had been the case, Trump would likely have fared better than second place.

Trump insisted that he was fine coming in second, until he wasn’t. “I’m not humiliated,” he said before again going back to the pack of journalists trying to remember the tales as he tells them. “These people are the most dishonest people ever.” For instance, Trump returned four times to the issue that has him most peeved: Marco Rubio’s third-place finish. Much of the coverage treated Rubio’s unexpected showing as the real news of the night, and left him as a loser.

Trump still beat Rubio, Trump wants this story to remember. “How come the guy who comes in third, and he’s a professional politician, and I beat him by a lot—isn’t this typical? The worst people ever,” he said, pointing at the press and drawing boos. “How come the person who comes in third is being covered like it’s one of the great victories of politics in this country?”

The “greatest” title only belongs in politics when it is Trump being discussed. “I’m not saying that to be braggadocious,” he said.

Read More: President Obama: The World I Want My Daughters to Grow Up In

Take, for instance, competing reports on Trump’s crowds versus those of Democrat Bernie Sanders. “I had 12,000 people. He had 3,000 people. … When it’s my turn to go: Donald Trump made a speech today in front of a crowd,” he said dryly. Trump has seldom met a headline he does not think he could improve, or a crowd whose size he won’t inflate.

If Monday’s loss made him appear temporarily humble, there were few signs it was a permanent condition. Trump dropped dubious claims, then impishly looked askance as if to distance himself from it, or to admit he didn’t know if it’s true. For instance, he said his rivals lie on financial disclosure forms because “they are afraid someone knows about the cash they are taking” under-the-table. Corruption charges come as casually as salutations to Trump.

He also thinks other bards’ tale of his Iowa show are giving him short shrift for picking up the whole tab—even though he is not. Roughly $2.6 million of his campaign has been given from small donors, while he has given himself $10.8 million in loans between Oct. 1 and Dec. 31. “It’s all self-funding. Can you believe this?”

Trump, of course, adds that he alone is spending money well. “(Jeb) Bush has $128 million. Wouldn’t he have been better off taking the money and throwing it out the window?” Trump asks.

As for potential replacement front-runner Ted Cruz, Trump has dark chapters yet to write about him. He is born in Canada. His team lied about Ben Carson dropping out of the race. He got special-preference loans. He forged an official-looking document. Cruz has an easy explanation: “You know why? It’s because he was born in Canada.”

That part about Canada is true, but its importance is greatly overstated in this history of the campaign offered by another son of an immigrant mother. Trump, of course, brushes right past that. He’s telling this tale.

“He made up stories,” Trump says with feigned shock about Cruz. “These are truly dishonest people. …. What kind of people are these people?”

The kind, as facts would have them, just beat Trump at his own game. 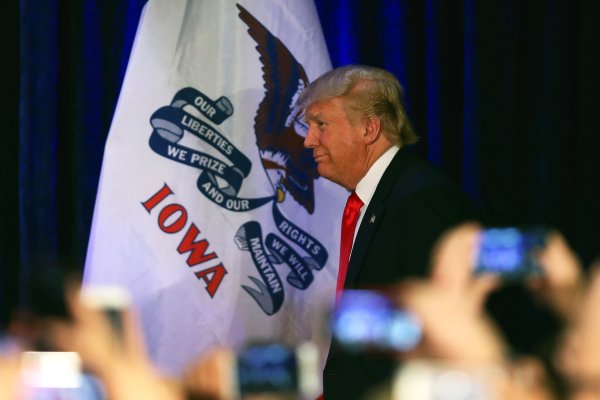