It takes chutzpah to give a victory speech when you lose. It takes even more to get on an elegantly furbished airplane, brag to reporters that your impending defeat is “wonderful” and “great,” and then descend into a state halfway across the country, where you will spend the next day giving more victory speeches.

But chutzpah is what has brought Bernie Sanders this far. The scrappy Vermont Senator came within a hair of defeating the Clinton juggernaut in Iowa on Monday night, bringing in 49.6% of state delegates compared with Hillary Clinton’s 49.8%. After delivering a celebratory speech in Des Moines while behind in delegate counts, Sanders embarked for a victory lap in New Hampshire beginning on Tuesday. As his plane rolled onto the tarmac in Des Moines on Monday night to head to the Granite State, the Senator walked down the aisle to cheers from his campaign staff. He flashed a rare smile and a wave at the press corps. A reporter asked how he felt. “It feels pretty great,” Sanders said.

“Tonight is a wonderful startup to the national campaign. As I’ve indicated many, many times, we’re in this to the convention,” Sanders glowed later on the plane, sometime after 3 a.m. E.T. “And I think tonight shows the American people that this is a campaign that can win.”

Sanders is planning to camp out in New Hampshire for most of the remaining week, with perhaps little more than a short break to spend a night at home in Vermont. He has a strong lead in Granite State polls, and his aides recently expressed confidence about a victory on Feb. 9.

But the Vermont Senator will likely need a resounding victory in New Hampshire if he wants to remain a serious challenger to Clinton. His loss in Iowa is likely the first of many — “We’re gonna win some states, we’re gonna lose some states,” Sanders conceded on the flight — and a near-tie in early states is not enough for him to win the nomination. New Hampshire will be hotly contested battleground. The state has helped boost the Clintons in the past, giving Bill Clinton a much needed launchpad in 1992 to take the Democratic nomination. In 2008, Clinton dropped her guard in the state after an Iowa loss and won just days after losing in Iowa to Barack Obama.

Sanders’ first stop in New Hampshire was in Concord at 5 a.m., where supporters had waited hours in the cold to see the Senator. In the afternoon, he stopped in Keene, where Clinton began her New Hampshire campaign in April 2015. A rowdy and mostly young audience gathered in the auditorium, waiting for Sanders to speak. A man with a goatee on the upper balcony stood up and began singing to the tune of the Beatles’ “Revolution”: “You say you want a revolution, well you know, you just gotta feel the Bern.” The audience sung along.

Indeed, nine months ago, it would have been hard to imagine a 74-year-old democratic socialist sitting in first-class seats on a charter plane, complete with catered wine and club soda, boasting about his performance and his chances to win the presidency. But Sanders’ laser-focused message of combatting income inequality and corrupt politics has broken through, exposing the weaknesses in Clinton’s candidacy and setting her campaign off balance.

There is good reason for Sanders to curb his enthusiasm, however. Iowa is hardly representative of the Democratic electorate, with 43% of state Democrats describing themselves as socialist, according to a Des Moines Register poll. Clinton aides are making the argument that it was the ideal state for Sanders, as are other Democratic supporters. “Iowa is not a typical makeup or cross-section of Democrats,” said Mitch Stewart, who steered Obama’s successful Iowa race in 2007 and now supports Clinton. More diverse primary states like Texas will be more instructive. Sanders “had a great night last night,” Stewart added, “but it’s important to take a long view in approaching this.”

Clinton aides tried to throw cold water on Sanders’ victory, saying the turnout in Iowa was second only to 2008. “Senator Sanders was saying for several weeks that if this caucus was a high-turnout affair, he would win. He was wrong,” said Clinton press secretary Brian Fallon. “Given Hillary Clinton’s ability tonight to generate enthusiasm and organize and drive turnout, it’s not at all clear post-Iowa what Bernie Sanders’ path is to the nomination.”

Crowds in New Hampshire are familiar with Sanders’ message and rowdily join in during his speeches. In Claremont on Tuesday night, the audience shouted along as he mentioned the Wall Street banks, saying “Put ’em in jail!” “Boo!” “Get ’em out!” “It’s criminal!” When he mentioned Goldman Sachs, a man in the audience shouted, “Hillary goes there!” causing Sanders to chuckle.

But after New Hampshire, there are few states, if any, where Sanders has a clear advantage. His campaign’s top aides say that any victory will lead to an overall rise in the polls and further victories down the road, but Clinton remains a prohibitive front runner, with extensive support and an enthusiastic following.

For now, his audiences in New Hampshire have bought his argument that he effectively won in Iowa. “It was a virtually a tie, but Bernie won because he came from 50 points to break even,” said Bob Cook, 71, who wore a broad-brimmed hat and a Sanders T-shirt to Sanders’ Keene rally Tuesday afternoon. To that his wife Louise added, “It’s a clear message to Hillary too.”

— With reporting by Jay Newton-Small/Des Moines 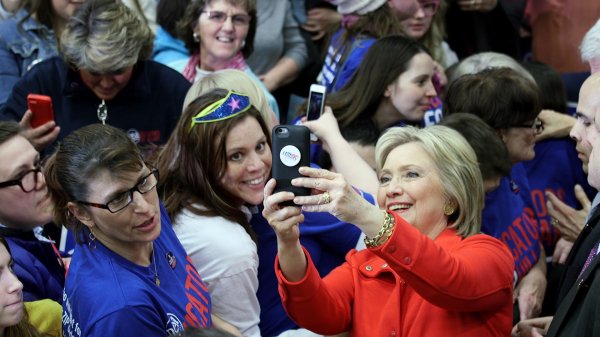 Clinton Sounds a Progressive Note
Next Up: Editor's Pick