Donald Trump, rushing from Iowa a loser late Monday, showed no signs of regret that he campaigned in this deeply conservative state where evangelicals were never a natural fit for the thrice-married New Yorker.

Instead, the billionaire real estate mogul said he was looking ahead to New Hampshire. With a typical fixation on polls, Trump claimed he was 28 points ahead of rivals in that state, where the next primaries take place on Feb. 9. But Trump was also up in the polls in Iowa heading toward Monday’s caucuses, and still fell in the end.

“We finished second. I’m just honored,” Trump said in a three-minute concession speech. It was likely the shortest set of remarks Trump has given in this campaign. “I want to congratulate Ted,” Trump said, nodding to caucus champ Ted Cruz of Texas. He made no mention of Marco Rubio, who came in third but stood as a looming threat.

Over the weekend, Trump started acknowledging that wins were not guaranteed. He boasted of having hired the best people and recruiting the best supporters. But in recent days, it seemed to be missing in action. At his campaign rallies, no volunteers manned the doors to follow up with potential supporters. Whereas most campaigns ask attendees to sign supporter cards after events, Trump did not. More than one attendee over the weekend asked reporters if they were with the campaign. They wanted to pledge to caucus.

“We love you. We thank you. We will be back, many, many times. In fact, I might come here and buy a farm,” Trump said in a final reminder that his tone was often at odds with the humble Iowans. “On to New Hampshire. So long, everybody.”

Trump drew tremendous crowds and unrivaled buzz. But Twitter followers aren’t the same thing as caucusgoers, and Trump came up short in his bid. “We had a great time. We’re going to continue to have a great time,” Trump said, publicly signaling he was still going to try to secure the Republican nomination.

That goal, however, just became a lot more difficult. After all, it was Trump who is accustomed to calling his enemies losers — not the other way around. For the first time of the campaign, voters told Trump that he was fired. 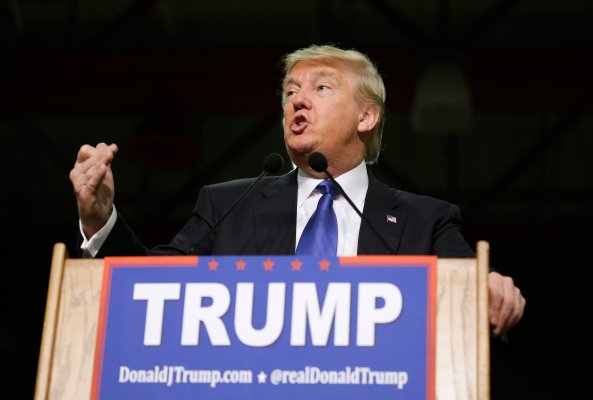 Donald Trump Tells Crowd to 'Knock the Crap Out Of' Hecklers
Next Up: Editor's Pick