The Spirit of the BernieBro Lives On

The BernieBro has faded somewhat online. But some Hillary Clinton supporters say the sentiment behind the over-the-top Sanders supporter is alive and well in real life.

The archetype is simple: a young, male supporter of Vermont Senator Bernie Sanders who questions Clinton supporters on a spectrum that ranges from simply tone-deaf to outright misogynistic.

He’s the smug-seeming young Sanders supporter who asked Clinton at a CNN town hall why young voters aren’t enthusiastic about her candidacy, then suggested it was because she’s dishonest. He’s the guy who floods Internet comment boards accusing Clinton supporters of voting with their “vaginas.” He’s the idealistic young liberal who replies to any critique of Sanders on social media with a flood of crass terms and vitriol.

“There are nothing but BernieBros on Iowa State’s campus,” says Monica Diaz, a senior at Iowa State University who has volunteered for Clinton. Like other young Clinton supporters interviewed for this article, Diaz says Sanders backers will “talk at me for hours” without pausing to hear her reasoning. “Bernie supporters judge people who are not Bernie supporters, and they judge Hillary supporters the hardest,” Diaz said in an email. “They think a vote for Hillary is a vote for Hitler.”

To be fair, the vast majority of Sanders supporters engage in respectful debate without resorting to insults or accusations, and the Vermont Senator’s supporters include millions of women. But the over-the-top behavior was enough of a problem that the campaign asked supporters last week to “follow the Senator’s lead and be respectful when people disagree with you.”

The candidate himself told Ebony magazine that “people should not be attacking people,” and apologized for some of the rhetoric of his supporters, especially those who were tearing down thoughtful critiques of his record on race. “We have many hundreds of thousands of supporters, and some of them have gone over the edge,” he said.

The plea seems to have had an effect. The vitriol has cooled on online message boards and social-media platforms and much coverage of the BernieBro phenomenon seems to be recycling the same weeks-old screenshots. Some are even questioning whether the BernieBro is real at all, suggesting it could be a bogeyman invented by pro-Clinton journalists.

It’s not uncommon for supporters of ideologically similar candidates to resort to personal attacks, since their candidates differ so little on actual policy. That’s what happened between Obama and Clinton supporters in 2008, when hostility ran so high on the Clinton side that some supporters protested the 2008 convention. They were known as PUMAs, which stood for “Party Unity My Ass.”

“There’s kind of an assumption that Hillary supporters are sellouts, that we’re abandoning our ideology in favor of an electable candidate,” says Olivia O’Hea, a senior at Drake University in Iowa, who recently switched her support from Sanders to Clinton. She says her friends were surprised to see her in Clinton’s corner during a mock caucus on campus. “They’re like, ‘You’re supposed to be in Sanders’ camp! Don’t you care about income inequality?’”

The phenomenon may in part be due to the differing demographics of the two campaign’s supporters.

Sanders is handily carrying the young vote, with 46% saying they’ll vote for him in the primary, compared with 35% who are for Clinton, according to a USA Today/Rock the Vote poll released earlier this month, and a majority of voters under 35 in Iowa support Sanders, according to a Des Moines Register poll Saturday. And for the sizable minority of millennial voters who support Clinton in Iowa and across the country, that choice can earn them hostility and ridicule from their peers who are feelin’ the Bern.

Because of the intensity of youthful support for Sanders, many young Clinton fans say their peers are shocked to hear they’re for her, and that reaction can quickly turn sour. “I do get a lot of surprised faces when I say I’m caucusing for Hillary and, especially here in Ames, it’s followed by a very derogatory comment,” says Diaz. “They will talk at you for hours about how she’s a horrible person and you’re a horrible person for voting for her.”

It’s not all hostility, though. Some Clinton and Sanders supporters say they have a great working relationship.

But even at Wellesley, Clinton’s all-female alma mater, Clinton supporters feel they have to defend against accusations that a vote for Hillary is rooted in frivolous or sinister reasoning. In other words, “BernieBros” aren’t just bros.

“There is often the assumption that we support her because she’s a woman and we can’t possibly think outside of that paradigm, and then there’s the added whammy of ‘Oh, you’re only voting for her because she went to Wellesley,’” says Hannah Lindow, president of Wellesley Students for Hillary and a former unpaid intern at the Clinton headquarters. “I can’t tell you how frustrating that is. Everyone in our organization has thought very deeply about this, but there’s an assumption that we are hopping on a bandwagon.”

While they haven’t seen the hateful online vitriol play out in their personal interactions, some Clinton supporters say the real-life sexism is very real, even if it’s muted. “What I have seen from more men than women is that I shouldn’t vote for Hillary because she’s ‘bossy’ or ‘cold’ or ‘aggressive,’” says O’Hea. “Someone said to me ‘she’s too bossy,’ and it was a man who’s voting for Bernie.”

O’Hea also noted that Sanders supporters tended to think her decision to support Clinton was uninformed, and often tried to mansplain things to her about the campaign that she already knew. “There’s a lot of, ‘If you knew this, you wouldn’t vote for Hillary,’” she said. “Thinking that might sway a vote, if you just knew this one fact about Hillary.”

“There’s this astonishing backlash from mostly males but also females who are saying, ‘You’re just doing this because you want to see a woman in the White House,’” Lindow says. “But what’s wrong with that?”

Several young Clinton supporters also noticed a double standard in the way young people view both candidates, especially when both are making such calculated efforts to gain millennial support. O’Hea noted that 74-year-old Sanders sending Killer Mike out to stump for him or hosting a (pot-free) 4/20 party on caucus day isn’t much more authentic than Clinton doing the whip/nae nae on Ellen. “Sanders and Hillary aren’t so different,” she said. “But we’re quick to call Clinton a phony, yet love the things that Sanders does.”

“If Joe Biden went on Ellen and danced, everyone would think ‘funny Uncle Joe,’” says Lindow. “But if a woman does it, it’s ‘cringe.'”

Other supporters see a double standard in how much credit Sanders gets for policies Clinton has supported all along. “When you have a male candidate who is fired up about reproductive rights, it’s a huge deal,” says Elena Saltzman, a senior at Brown and co-founder of Brown Students for Hillary. “When you have a woman, it’s like ‘Oh, of course.'”

“All Bernie supporters have ever done to me here is talk at me for hours about how Bernie is the right guy, and if you don’t believe that, you’re scum,” says Diaz. “It’s exhausting.” 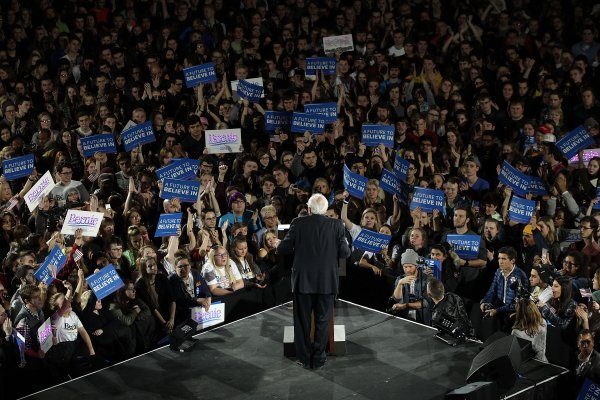 Sanders Talks U.S. History on the Campaign Trail
Next Up: Editor's Pick