Ken Speaks: 'I Will Always Love Barbie, No Matter Her Size'

A Ken doll at the International Toy Fair in Nuernberg, Germany on Feb. 2, 2011.
Miguel Villagran—Getty Images
Ideas
By Sarah Miller

And now I must accept that after more than 50 years of being pretty much the same, the woman I love has changed. But I do not plan on loving her any less. I hope that you won’t either, and that the following words will help serve to let Barbie know we honor and support her courageous metamorphosis.

Before we go on, I want to say that I know that, yes, while Barbie is my lady, she doesn’t belong to me. She belongs to every little girl who dreams of being free, of having lots of outfits, of doing the splits without changing her expression. I also want to say I know I haven’t always been perfect. I get it that until 1977 I had straight unbendable arms and a head that could only turn left and right. I get it that my molded plastic hairstyle might make me seem shallow, as if I’m so worried about having a hair out of place I said: “You know what, guys? Just mold it to my head.” But I’m not just some guy who knows how to stand next to a surf board looking like I need to go number two. I’m smart. I am a man of my times. You know all those sustainability conversations you’ve been having? Well, I have them, too. Just lower to the ground.

And let’s face the music—I will face it slowly and awkwardly, without blinking, you feel free to face it your own way—Barbie just wasn’t sustainable. Her proportions just didn’t exist in the real world. Of course Barbie and I didn’t actually live in the real world. If she had, we’d have spent all our time filling out health insurance forms and lying awake wondering which one of us had ruined the other one’s life instead of driving around in a camper. Still, there’s only so many times you can hear the woman you love walk into a lingerie department and ask: “Where are the 22 Double EEs?” without your heart breaking into a million pieces. On a more practical level, the Mattel art department told me it’s way easier to make tiny molded hamburgers and chicken cutlet sandwiches then to make a tiny molded plastic lettuce leaves or the spicy tuna rolls Barbie eats on heavy workout days. Also, speaking of sustainability, Barbie didn’t meet the minimum weight requirements for parasailing and even though you might think this is weird and contradicts things I said earlier about how much I love her, I just can’t sustain a relationship with a woman who can’t go parasailing. Sorry. That’s just #whoiam.

I don’t know about you, but my love for Barbie means I’m happy Barbie is going to get to be all the things that she couldn’t be before. Tall—really, rather tall!—and slim. Medium-sized and curvy. Petite! Barbie is finally going to get to experience what it’s like to be relatively normal. She’s going to see that there’s more to life than doing the splits in a camper. That said, if you want Barbie to do the splits in a camper, that Barbie still exists. Actually all the Barbies can still do the splits. But they do them while having smaller breasts and bigger butts and thighs, so they’re more like regular women who are also gymnasts than super glamorous bizarrely thin women who are also gymnasts, and this means that women will feel better about themselves?! Argh. It all made sense in the training. Eight words: Thank God for the magic simplicity of parasailing!

Yes, Barbie is going to represent even more races and cultures. Yes, she will wear bigger clothes, and yes, not all her friends will be able to borrow them. But don’t worry. She will still be more attractive and have a healthier BMI than the average woman. She will still have a vacant expression on her face, as if she spent hours watching that new Amazon original show Mad Dogs and can’t believe she subjected herself to such violent misogyny on the very outside chance that the awesome actress from Fargo who disappeared in episode five was not actually dead.

But she will still be Barbie.

The thing is, if you love Barbie like I love her, you have to let her change. Because if we don’t let her change, then the Elsa dolls have won, and frankly, Elsa’s smug enough already without allowing her to officially take over the entire girls’ toy market.

Mattel obviously wants to keep Barbie around. Partly because they love her and partly because they love money. And in fairness the people who create and re-create Barbie would rather be paid for talking about eyeliner colors than get jobs. Which is why they tried everything. They gave both me and Barbie non-white friends. They made a Barbie with pink hair and tattoos. They even made Barbie’s dog Taffy real plastic doggie poops. But in a world where little girls idealize Lena Dunham and Beyoncé and and Nicki Minaj, it wasn’t enough to just put Barbie in a nurse costume, turn to everyone and say, “Happy now?” That iconic shape had to change. They had to start over and create a new Barbie tomorrow.

You might be saying to yourself, What is a Barbie Tomorrow? Will it get me drunk? Do I have to pay extra for the ice? You might also be saying: “What do you know? You’re old! You look like Ryan Seacrest on his way to interview for a host job at Outback!” Fair enough. But I know about love—I have loved the same woman for a long time. Since I was zero years old! And I will keep loving her, because she herself is such a loving person—she loves all of you so much she is willing to change herself, right along with your changing nation. Can you celebrate her resilience, by purchasing her, in several versions? 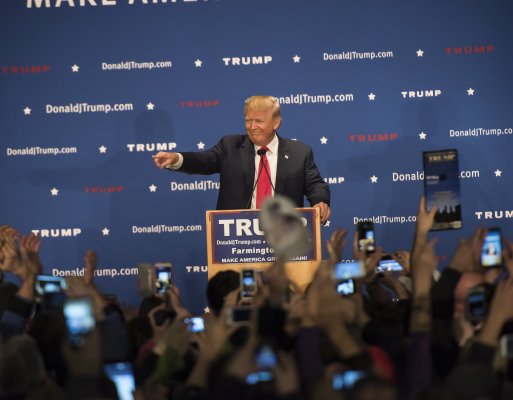 Predicting Which Presidential Candidates Will Win by How Good Their Volunteer Jobs Are
Next Up: Editor's Pick