Bernie Sanders told TIME on Sunday that he would be willing to raise taxes on the middle class in order to guarantee universal healthcare, after months of weathering attacks from Hillary Clinton.

When asked in an interview in Charleston, South Carolina, on Sunday which of his big-ticket proposals would cost the middle class more in taxes, the insurgent presidential candidate said “I think if we can guarantee healthcare to all people comprehensive healthcare, no deductibles, and if we can cut people’s healthcare bill substantially.”

Sanders disputed to TIME it was a middle-class tax hike, saying it would ultimately save taxpayers money by cutting out private health insurers.

He added that Clinton’s attacks over the bills were a “distortion of reality.”

“What media sometimes does, what my opponent does, what Republicans do, is they really try to take a cheap shot. If you were paying $10,000 in private health insurance and I said to you, guess what, you ain’t going to pay that $10,000 and more but you’re going to pay $5,000 more in healthcare premiums, you’d be jumping up and down for joy. You save $5,000 on your healthcare bills,” Sanders told TIME.

“It’s disingenuous. I’ve heard this my whole life,” Sanders continued, arguing the legislation would save money.

The Senator’s comments on Sunday appear to backtrack from statements he made last month, when he said he would not raise taxes for any program except paid family leave.

At the heart of the debate between Clinton and Sanders over taxes is the question of what programs the federal government should be willing to pay for. Sanders has long supported a single-payer healthcare system in the style of European countries and Canada that he calls “Medicare for all,” saying the program would guarantee healthcare for all Americans and greatly reduce healthcare bills.

But Sanders has never firmly answered how as president he would pay for the proposal, which many have estimated to cost upwards of $15 trillion over 10 years. Legislation he has repeatedly introduced in the past has indicated he would raise taxes on the middle class, including a 2.2% income tax and a 6.7% tax on employers.

In an interview with NBC’s Meet the Press last month, Sanders was asked whether he would not raise taxes on the middle class for any reason—except to pay for paid family leave. “Yes, that’s right,” Sanders said. “Look, we have seen a huge transfer of wealth from the middle-class to the top one-tenth of 1%.”

“Why [do] you have a candidate who claims to be a progressive that is essentially laying out an approach to problems that is a Republican approach?” Weaver said of Clinton two months ago. “It’s an instinctive move back to the corporate centrism that the Democratic rank and file has disavowed.” 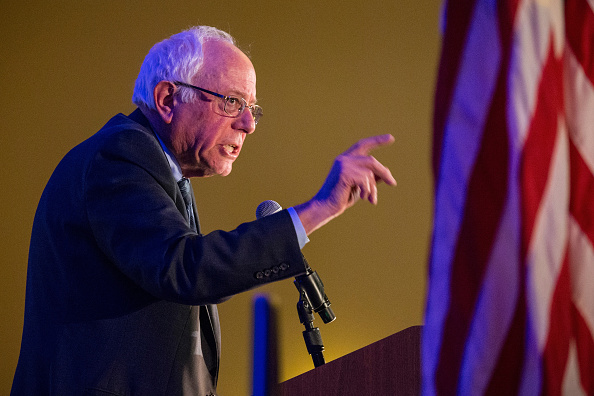