Cruz lashed out at the city while firing back at billionaire front-runner—and New Yorker—Donald Trump, who had attacked Cruz previously over the Canadian-born Senator’s eligibility to run for President. In a dig at Trump, Cruz, who is currently polling in second place, said, “there are many, many wonderful, wonderful working men and women in the state of New York, but everyone understands that the values in New York City are socially liberal or pro-abortion or pro- gay-marriage, [and] focus around money and the media.”

Donald Trump quickly fired back, noting the city’s brave response to 9/11, and other New York residents from both sides of the aisle have joined together to send a wave of criticism at Cruz. The Daily News took a jab at the Texas Senator with a late-edition front-page showing the Statue of Liberty displaying her middle finger with a headline reading “DROP DEAD TED.” It continues, “Hey Cruz: you don’t like N.Y. values? Go back to Canada!” in reference to the ever evolving spat around his place of birth.

New York Gov. Andrew Culmo blasted Cruz on Friday morning, according to the Associated Press, demanding an apology for comments which he called “obnoxious on every level.” Mayor of New York City Bill de Blasio also called for an apology:

“On behalf of all New Yorkers, I am disgusted at the insult that Ted Cruz threw at this city and its people,” de Blasio said. “The bottom line is he does not understand in the least New York values.”

“After all we have been through as a city and as one undivided nation, to have a United States senator running for President paint New York as a city consumed with greed, sin and media obsession is shocking,” Giuliani wrote. 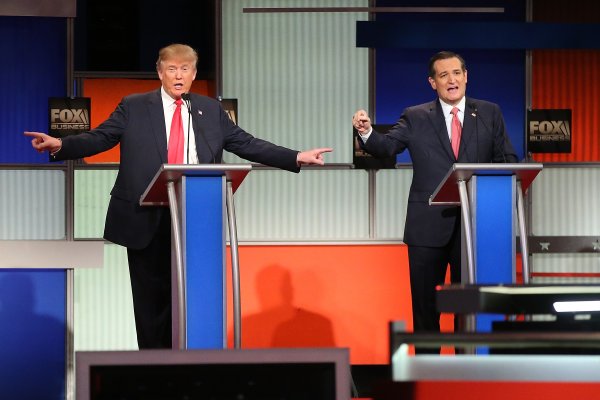 Republicans Jockey for Advantage After Bitter Debate
Next Up: Editor's Pick