This Is How to Make Ryan Gosling Giggle

Ryan Gosling took the stage for his first-ever Saturday Night Live hosting gig on Dec. 5 and gave a performance that charmed cast mates and viewers alike. But no amount of charm could help the 35-year-old Canadian actor keep a straight face during one particularly hilarious sketch. In “Close Encounter,” Gosling, Cecily Strong and Kate McKinnon play three people who were abducted by aliens. However, when the trio is interviewed about their experiences by two NSA agents, played by Aidy Bryant and Bobby Moynihan, it comes out that McKinnon got the short end of the stick.

During an interview with Vulture, the sketch’s writers, Mikey Day and Streeter Seidell, said they first knew Gosling was going to break during the Dec. 3 blocking rehearsal. “He always seemed to lose it after Kate described being tossed onto the roof of Long John Silver’s,” they said. “He had the line, ‘Man, you got screwed,’ after that part, but it always seemed to take a while for him to get it out. But we loved it because he seemed to always be having fun up there.”

Read More: Adam Driver Is as Delightfully Bizarre as Ever in His SNL Promos

The two also explained that seeing the actors break during the live show was a nice moment: “It was fun because you could tell the cast was having fun with each other. This cast is pretty good about keeping it together, so seeing them lose it felt like a special thing.”

Day and Seidell even joked about creator Lorne Michael’s reaction to the bit. “Lorne gave us a million high-fives. Just kidding! Lorne seemed happy,” they said. 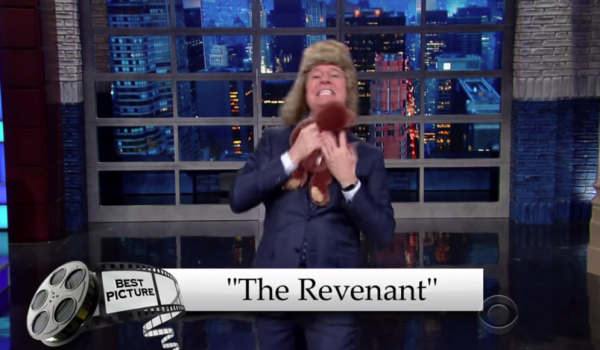 Watch Stephen Colbert Act Out the Plot of Every Best Picture Nominee
Next Up: Editor's Pick