How the Republican Presidential Race Got Even Nastier

In one of the most personal exchanges yet in the Republicans’ already fractious race for the party’s nomination, Ted Cruz invoked rival Donald Trump’s late mother. And not in a good way.

Her sin? She was born in Scotland.

Welcome to the final month before Iowa leads the country with its caucuses and the last month before voters in New Hampshire lend their voice. What was designed as an intellectual counter-punch quickly became a “Your Mama” attack.

With just 18 days before Iowans caucus, this is the state of the campaign: a personal fight in close quarters in which candidate-to-candidate acrimony and strategic ploys are hard to discern, and may not matter.

The rhetoric stood to overshadow serious but abstract conversations about trade policy, fighting terrorism and the role of the federal government. Everything party elders hoped to avoid in 2016 came reeling forth, on the lesser-watched Fox Business nonetheless, as about half of voters in Iowa and New Hampshire, historically speaking, are still undecided.

“The final phase of a campaign is how you differentiate yourself from everybody else. We’ve arrived at that stage,” Cruz adviser Rick Tyler told reporters of his boss’s newfound feistiness. “Voters actually find it positive, since it helps them make a decision.”

Others in doubt? Attack the other guys. Just pile on the party in power and hope to turn early-state contests into referendums. It worked in 2008 as Republican John McCain ran against his own party to win the primary, and then become the GOP nomination.

In this week’s debate—the first of the year but hardly the last— New Jersey Gov. Chris Christie dismissed President Obama as a petulant child who deserved to have his rear quarters kicked to the curb. (The 22nd Amendment trumps any L.L. Bean boots purchased at New Hampshire’s outlet malls.) Former Florida Gov. Jeb Bush argued that likely Democratic nominee Hillary Clinton might spend her first 100 Days in the Oval Office shuttling back and forth between the White House and a courtroom. (She won’t.)

And in the spin room they went after each other: “Rubio looked like an operative reading off a three-ring binder” of opposition, according to Bush adviser David Kochel. (There’s a reason why Republicans look outside their primary rivals to pick a running mate.)

When Rubio and Cruz engaged in a debate on tax policy instead of answering a question on entitlements, Christie interrupted to plug his own reform plan. “You already had your chance, Marco. You blew it,” Christie snorted as Rubio objected.

Later on, Cruz and Rubio sparred—and unloaded the research file aides have prepared for the better part of a year alleging a host of anti-conservative flip-flops by the Texas lawmaker. “I appreciate you dumping you oppo research,” Cruz japed, laughing about what most voters would consider research about the opposition.

Rubio did not flinch: “No, it’s your record.”

Christie mocked the pair for Senate-speak. “I’d like to interrupt this debate on the floor of the Senate to actually answer the question you asked,” he interjected. He knows that he’s running as an outsider, and is actually OK with it.

When a voter needs a decoder ring for a debate, it’s clear that the audience is far from those sitting with a can of Diet Coke at home. It might hurt the party come November, but the ultra-involved activists needed no crib sheet. They need egos stroked at this moment in the political calendar.

Yet the most dynamic moment of Thursday night’s debate in South Carolina came as the surviving White House hopefuls argued over who, standing in feets of each other, met legal muster. Hint: they all do.

But in personality-driven campaigns bolstered by a former reality television star who pushes discredited readings of legal blogs, whisper campaigns led by operatives jealous of better-polling rivals and voters who cannot make sense of the onslaught of negative ads crowding their televisions, it was a perfect moment of where this campaign stands—and where it is going.

Trump, the bombastic billionaire, remains atop the polls nationally but locked in a tight race with Cruz in Iowa. That’s why Trump has been shivving Cruz on his constitutional eligibility, even though most legal scholars consider this another sideshow. Cruz was ready with a rejoinder questioning Trump’s own qualifications.

The moment caught Trump by surprise. “Not me!”

Oh, yes, you. A woman born in 1912, in some voters’ minds, might be the thing that finally disqualifies frontrunner Trump from the most powerful office in the land

“Donald’s mother was born in Scotland. She was naturalized,” Cruz continued with the calm of a former Supreme Court lawyer, which he is.

“But I was born here. Big difference,” Trump said, trying to set this attack back on track and stretching out the adjective as long as he could. “Big” became a very big word. He knew the clip was going to be a cable news favorite.

“On the issue of citizenship, Donald, I’m not going to use the issue of your mother’s birth against you,” Cruz said. It was a fantastic reminder that no white paper, no policy address can compete in the modern era of political campaigns with the snide dagger stabbed just below a rival’s rib cage.

The nastiness was not limited to that pair and competing readings of the Constitution’s Article 2, Section 1. No, the others were sniping at each other too, locked in their own battles for friendly slices of likely primary and caucus-goers. Many of the moments seemed tailored for friendly super PACs to make television and Web ads.

“We don’t need a weak person being President, and that’s what we would get with Jeb,” Trump jabbed. “Backbench Senators,” Bush clucked. “I hate to interrupt this episode of Court TV,” Rubio interrupted.

Rubio aides sent that quip to his email list before anyone had left the debate stage.

These campaigns have spent small fortunes building dossiers against their rivals. It’s time they used them. The attacks seen Thursday night were just a preview of what the candidates know about their rivals. Imagine what their aides are pushing behind the scenes.

No. Don’t do that. Just turn on a television in an early-nominating state like Iowa, New Hampshire or South Carolina. Yeah. All the embarrassing details are soon to make their way to broadcast soon.

In the best-case scenario, voters can construct a Venn diagram of family trees, national borders and the Constitution. All of which, of course, go well with popcorn. 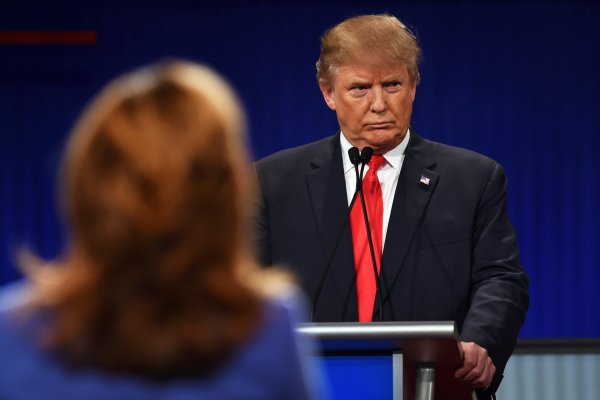