No one can accuse Rand Paul of pandering during his White House run.

The Republican from Kentucky on Tuesday visited to a senior center in Concord, N.H., and vowed he would increase the retirement age for workers and make it tougher for Americans to qualify for disability. It was a tough sell to his crowd, which was overwhelming grey and frail.

Paul is trailing in the polls in early nominating Iowa and New Hampshire, as well as nationally. Fears of terrorism have roared back into voters’ mind, and Paul’s foreign policy has little room for American military adventurism abroad. At the same time, his libertarian-leaning domestic agenda sit uncomfortably with some Republican primary voters and the televised debates have done him few favors. And he has struggled to attract headlines away from the likes of Donald Trump or Ted Cruz.

Read More: Rand Paul Says He Will Not Participate in Undercard Debate

So Paul is going back to what made him fascinating for so many voters in the first place: he speaks his mind and gives little concern to the political implications.

Take his stop Tuesday afternoon in the basement of a senior center, where residents parked their wheelchairs and walkers at the end of aisles. An easy majority of the audience is a Social Security recipient. That program remains a bedrock promise for all Americans, although its cost is a huge drain on the federal budget as few workers’ taxes are supporting older Americans’ monthly check. Any changes to it are viewed as political doom, and most candidates routinely pledge to defend it against any tinkering.

Not for Paul. He voluntarily brought up Social Security and what he sees as the need to change the program many hold sacrosanct.

When Paul gave the floor to residents, one challenged him on his Social Security position. “Why do you want to eliminate Social Security for future generations?” a woman asked him.

Paul tried to calm her. “I don’t want to eliminate it. I want to change how it’s funded,” he said. Under Paul’s plan, he explained, current workers would have to stay in their jobs longer and wealthier Americans would draw fewer benefits. Also, Americans would pay Social Security taxes on their whole paycheck, as opposed to the current system, which taxes only the first $117,000 in wages and the rest goes untaxed.

“I’m not gleefully jumping up and down about raising the age. It’s not very popular,” Paul said. But, he said, the current system is not tenable and an older retirement age could fix two-thirds of the funding crisis. “We’re all talking about the next generation,” Paul said.

He also said doctors too easily give patients seeking disability payments the sign-off. “The incentive is to say yes,” the eye surgeon said, noting the patients are customers who pay. “For every one of those (who are disabled), there are one or two who aren’t really disabled.”

His fix? An independent doctor. “To get disability, I think you should have to go to a doctor you don’t know and who you’ve never seen before to have an independent judgment of it.”

Before he even left the front of the senior center auditorium, Paul joked that his advisers had warned him to stay away from Social Security programs. “You’re crazy. You’re going to a senior center and you’re telling them the age has to go up,” he chuckled. Of course, he did not heed them.

Asked after the event about the move, Paul said he didn’t want to pander. “I don’t know anything other than to tell the truth,” he said. “I’m not telling people here that they’re going to have a problem.”

Read Next: The Reinventions of Rand Paul 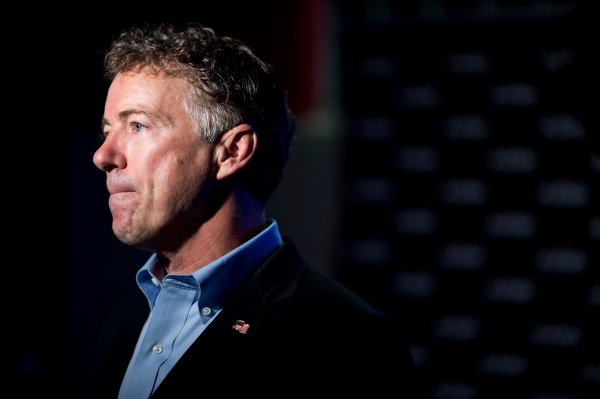 Rand Paul Says He Will Not Participate in Undercard Debate
Next Up: Editor's Pick