The Truth About 7 Food Myths

Photograph by Danny Kim for TIME; Gif by Mia Tramz for TIME
By Cynthia Sass / Health.com

Throughout my years as a sports nutritionist, several athletes have asked whether they should avoid eating turkey on game days because it might make them sleepy. I’m also regularly asked things, like, “Do spicy foods really boost metabolism?” or “Do I really need eight glasses of water a day?” It seems there are a number of eating and drinking wives tales many people still wonder about, including some that are particularly relevant this time of year, like those dealing with colds and hangovers. To set the record straight on seven food-focused notions check out my roundup below. You may be surprised by which beliefs are solid, which are rooted in truth but often exaggerated, and which are just flat-out false.

This myth stems from the fact that turkey contains tryptophan, an amino acid that ups the brain chemical serotonin, used to make melatonin, which are both helpful for sleep. But the truth is the connection isn’t quite that simple or direct. First, turkey isn’t unique in its tryptophan content. The amino acid is also found in chicken, as long with other meats, fish, dairy, and eggs (and you probably haven’t felt sleepy after an omelet).

Without a hefty helping of carbohydrates, which make tryptophan more available to your brain, you probably won’t feel sleepy.

The real reason turkey has been tagged as a snooze inducer is because Thanksgiving is a day of overeating for most people. Stuffing yourself with too much food diverts blood flow to your gut, which is the real brain drainer and energy zapper. So if you want to feel alert go ahead and eat some lean turkey, as long as it’s part of a balanced meal and not super-sized.

This one has science on its side. A famous 2000 study from the University of Nebraska Medical Center found that chicken soup has an anti-inflammatory effect, which may help ease pain or discomfort.

Chicken soup can also speed up the movement of mucus through the nose to relieve congestion. While cold beverages can slow the draining of mucous secretions, hot liquids thin them, so they’ll drain faster, which provides some relief. In addition, you tend to lose more fluid when you’re sick, from perspiration, or coughing, and the salt from soup can help keep you hydrated because it triggers water retention. If you don’t eat chicken, a veggie soup will do nicely, and either way adding veggies is a smart way to boost your nutrient intake and bolster immunity.

There have been more than 25 studies published about alcohol’s impact on sleep, and while it’s true that alcohol tends to reduce the amount of time it takes to fall asleep, it also disrupts overall sleep, particularly important REM sleep, which is mentally restorative.

And the more you drink, the worse the impact.

If you have trouble sleeping be sure to cut off caffeine at least six hours before bed, keep your room cool, dark, and quiet, and instead of a glass of wine try even five minutes of meditation, deep breathing, or progressive relaxation (focusing on relaxing your body, starting with the tips of your toes, up to the top of your head), either before bed, or after you’ve tucked in.

Myth: Hair of the dog helps a hangover

While imbibing in the a.m. may help temporarily, you’ll rebound right back to hangover symptoms, and probably even intensify them. Having another drink forces your body to prioritize metabolizing the new alcohol, so you get a brief reprieve from the chemical aftermath of the previous night’s cocktails. But as soon as the new alcohol gets processed, you’re back where you started, except this time with even more toxins in your system. While preventing a hangover is your best bet, if you’ve already done the damage the true remedies are time, rest, and lots of H2O. Adding some electrolytes may also help with hydration, which is why pickle juice and coconut water are often cited as hangover helpers.

Fact: A spoonful of honey is good for coughs

Honey contains natural anti-inflammatory and anti-microbial substances. In fact, in one study, more than 100 children with upper respiratory tract infections were given either a honey flavored cough suppressant, nothing, or up to two teaspoons of pure honey before bed. The real honey not only reduced nighttime coughing and improved sleep, but it was just as effective as the over the counter medication.

Next time your throat hurts, ease the discomfort by mixing a little honey with warm water and lemon, or simply swallow honey straight from the spoon. (Note: Due to the risk of infant botulism, never give honey to a child younger than age of one.)

We now know that ulcers aren’t caused by worrying, or eating spicy foods that “burn holes” in your stomach. Eighty to 90% of ulcers are caused by H. pylori bacteria, and as a result are treated with antibiotics.

That said, if you’re currently being treated for an ulcer avoiding spicy foods is a good idea until it has healed. But in general, having chili peppers in your diet may offer a number of health benefits, including boosting metabolism, thinning the blood, which lowers the risk of stroke, reducing the risk of certain cancers, supporting immunity, and reducing inflammation, a known trigger of premature aging and chronic disease.

While it’s not true that you lose weight with every sip of water you drink there have been published studies to support the connection between water and weight management. One found that when adults downed two cups of water right before eating a meal they ate between 75 and 90 fewer calories. A second study, conducted by the same researchers, found that when two groups of people followed the same calorie-controlled plan for 12 weeks, those who drank two cups of water before meals lost about 15.5 pounds, compared to about 11 pounds in the non-water drinking group.

Plus, there is some research to show that water offers a slight metabolic boost. One German study found that drinking 16 ounces (2 cups) of water upped calorie burning by 30%. The effect was triggered within 10 minutes and sustained for over an hour. And while the impact was small, in terms of the total extra number of calories burned, day after day those little boosts can add up. 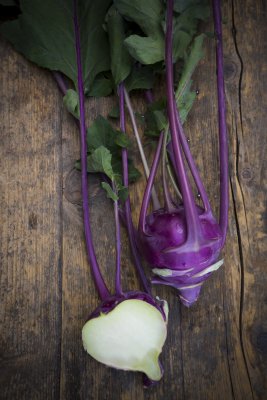 15 Things to Know About Kohlrabi
Next Up: Editor's Pick