The Worst That Can Happen When Egg Prices Get Too High

Cartons of eggs sit on a cooler shelf at a Safeway gocery store August 20, 2007 in Washington, DC.
Chip Somodevilla—Getty Images
By Emelyn Rude

The kitchens of the United States will remember 2015 as the year of the very expensive egg, with the average price per dozen reaching nearly $3.00 this fall. The cause of such soaring costs was a nasty strain of avian flu, which resulted in the culling of more than 40 million laying hens nationwide. For the first time in a long time, prices for chicken eggs were even higher than prices for chicken meat.

American egg lovers were understandably worried. At least one grocery store began rationing their egg sales and chefs began rethinking their decisions to add eggs on top of everything on their menus.

Even with pocketbooks a little thinner than before, now that prices have stabilized, it’s safe to say that it could have been a whole lot worse. Over 150 years ago in San Francisco, high egg prices proved deadly for man and beast alike.

The whole hard-boiled affair started in the early 1850s, as the area’s existing farms struggled to keep up with the massive population boom brought on by the Gold Rush. With so many new and foolhardy mouths to feed, food prices skyrocketed. Amongst these incredibly expensive edibles was the legendary $1.00 egg, costing the equivalent of $30 in today’s currency. Even with eggs shipped in by the millions from across the Pacific and from the East Coast, demand still far outstripped supply.

Fortunately for the eaters of San Francisco, just 30 miles from their city lay the legendary Farallon Islands, whose harsh cliffs and stony shores have stood sentinel over the harbor for millennia. Although human beings have long found the Farallons inhospitable—the indigenous people of the area called them “the Islands of the Dead”—they are a haven for a myriad of marine species, such as sea lions, elephant seals, Great White Sharks and the largest colony of sea birds anywhere on the Pacific Coast. At the time, the most populous of those birds was the Common Murre, a creature often described as a “flying penguin,” with distinctive blue eggs and the convenient attribute of being easily scared from its nests.

In 1849, the story goes, one Dr. Robinson and his brother-in-law hired themselves a ship and headed over to the Farallons. There they loaded up their vessel with Murre eggs, easily identifiable by their vibrantly speckled and pointed shells that enclose a fiery red yolk twice as large as that of a chicken. Although the eggs are said to have a slightly fishy flavor, San Franciscans gobbled up Dr. Robinson’s haul. The profits enabled Robinson to start his own pharmacy and establish the Farallon Egg Company, the first of its kind on the Pacific.

Almost immediately the Egg Rush was on. Donning their cotton sack “egging shirts,” intrepid men from rival egging companies would risk life and limb scrambling over sharps rocks, climbing sheer cliff faces and fending off aggressive sea gulls to gather up their shelled quarry. Egging season would begin each year in mid-May with the eggers stomping on all existing Murre eggs, thereby ensuring the ones they gathered were freshly laid. (If sat upon for a single day, they claimed, the eggs would be unfit for market.) By the time the season was over in August, the companies had gathered as many as 500,000 eggs, an astonishing number from a bird who typically lays only one egg per season

But the thriving market came with its own problems, as rival egging interests became too lucrative for competition to stay friendly. In the summer of 1863, as a small city news headline declared, there was “War in Earnest at the Farallones.” Independent Italian eggers had attempted to land on the main islands to start that year’s egging, only to be blocked by Dr. Robinson’s Egg Company, which had previously claimed exclusive ownership of these lucrative nesting grounds. Not wanting to return to the more treacherous and less productive Northern Farallones they were normally relegated to, the disgruntled fishermen shouted that they would land on these islands “in spite of hell” and returned to do just that the next morning—this time drunk and armed. As the paper reported:

Ultimately two men were killed in the conflict, one on each side. The leader of the invaders was ultimately convicted of murder and sent for a year in state prison.

In spite of the death and destruction, the ravaging of the Farallon Murre eggs continued for decades, even after an 1881 government mandate prohibited egging companies from visiting the islands. With lighthouse keepers and independent fishermen keeping the tradition alive, summers in San Francisco were “gull egg” season well into the early 20th century.

Only after the chicken-farming industry took root in earnest did the egging finally stop, but such was too little too late for the Murre, the “football” of the Farallones. Populations had dropped from hundreds of thousands of individual birds at the start of the egging in the 1850s to fewer than 30,000 in the 20th century. According to researchers on the islands, the birds have only just started to recover from the effects of egging more than a century ago. Taking the story of the now much less Common Murre to heart, let’s hope Americans don’t have to pay high prices for eggs ever again.

For your security, we've sent a confirmation email to the address you entered. Click the link to confirm your subscription and begin receiving our newsletters. If you don't get the confirmation within 10 minutes, please check your spam folder.
Most Popular on TIME
1
No, Trumpism Isn’t Over. Look at What Just Happened in Arizona
2
Could Amsterdam's New Economic Theory Replace Capitalism?
3
My Parents Will Be Vaccinated Long Before Me. Can They Come Visit? 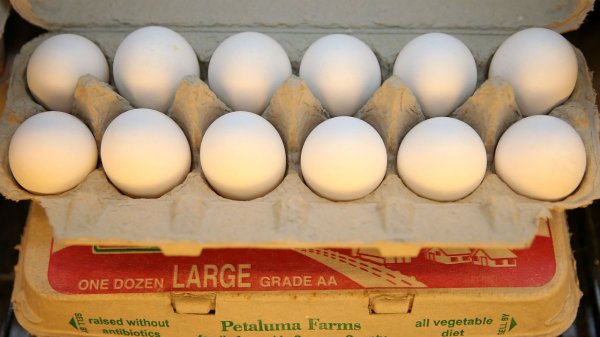 Egg Prices Could Rise to $6 a Dozen
Next Up: Editor's Pick