10 Things Your Nails Can Tell You About Your Health

Eyes may be the windows to the soul, but nails can offer an important glimpse into your overall health. It turns out, having strong, healthy nails isn’t just good news for your manicure—unpleasant nail symptoms could also indicate bigger health problems. We spoke with John Anthony, M.D., a dermatologist at the Cleveland Clinic in Ohio and Debra Jaliman, M.D., a New York City-based dermatologist and author of Skin Rules about the nail symptoms you shouldn’t ignore (and which are totally normal).

“This can happen naturally with age,” says Dr. Anthony. “But it’s also sometimes due to nail lacquers or acrylic nails.” If you often wear acrylic nails or paint your nails and are having this problem, try taking a break from the salon and give nails a chance to recover. Another possible cause: smoking, which can stain nails and give them a yellowish hue.

This issue is a common one, and there are a few possible causes. “Soft, brittle nails can occur from dryness on the nail plate,” says Dr. Jaliman. “This could be from swimming, overuse of nail polish remover, frequent dishwashing without gloves, or just from living in a low-humidity environment.” Other possible causes include chemicals (such as if you’re frequently exposed to cleaning products) or aging. However, if brittle nails are an ongoing problem, speak to your doctor: sometimes hypothyroidism (a condition where the thyroid works too slowly) causes this side effect, too.

To soothe cracked nails, try slathering them with a super-moisturizing lotion. Like your skin, nails are absorbent, and lotion can prevent them from drying out in the future. Dr. Jaliman recommends choosing a product that contains hyaluronic acid, glycerin or Shea butter (we like SheaMoisture Raw Shea Butter, $13 at amazon.com). If that doesn’t help, you can also try taking biotin, an over-the-counter nutritional supplement that promotes healthy nail growth.

“Clubbing of the nails—when the ends of your fingers swell and the nail becomes curved and rounded—can sometimes be a sign of liver or kidney disease,” says Dr. Anthony. If you’re experiencing this, speak to your doctor.

Many people believe that white spots on nails indicate a calcium deficiency, but this isn’t typically the case: “Usually, those white spots are not very significant,” Dr. Anthony says. “They’re often the result of minor trauma, such as if you whack your finger against something, and aren’t generally to do with calcium.”

“I sometimes see transverse (side to side) ridges on nails,” says Dr. Anthony. “This is typically the result of direct trauma to the nail or a more serious illness, in which case you’ll see it on more than one nail at a time.” The reason? When your body is working overtime to combat an illness, it saves its energy for the important stuff. “Your body is literally saying, ‘I’ve got better things to do than make nails’ and pauses their growth,” he explains.

Another possible cause for those side-to-side ridges? “Horizontal lines across the nail plate can also be caused by a drug reaction, for example if the patient recently had chemotherapy,” says Dr. Jaliman.

This is usually a normal sign of aging. “Just like wrinkles on your face, you also get lines on your nails as you age,” says Dr. Jaliman.

Nail-biting is a common habit, but if it’s excessive—say, constant biting or picking at the skin around the nails—it could be a sign of obsessive-compulsive disorder. “Sometimes psychiatric medicine is required to treat OCD-related nail biting,” says Dr. Jaliman. “A bitter-tasting compound that’s polished onto the nails can help, too.”

Speak to your doctor if your nails are covered with pits or dents, as this could be a sign that you have psoriasis, says Dr. Jaliman.

The problem: Dark stripes or a painful growth

If you have black discoloration on your nails (such as black streaks) or a painful growth on the nail, see your doctor immediately. “Melanoma that comes from the nail unit is serious, and can sometimes cause black lines or stripes to appear on the nail,” says Dr. Anthony. “So if you see those changes happening on your nails, it’s important to see a doctor.” And although melanoma is generally less common in Hispanic, Asian and black populations, Anthony says that those patients may actually be more likely to see dark stripes when the disease is present—making a trip to the doctor even more important. 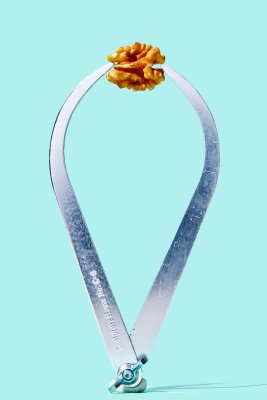 The Healthiest Work Snack You Can Eat
Next Up: Editor's Pick