Ben Carson maintains that he never wanted to run for President. This week may be reminding him why.

The retired neurosurgeon is one of three candidates who have never held elected office running for the Republican nomination. But both Donald Trump and Carly Fiorina have had their past scrutinized during their time in business and, for Fiorina, her campaign for Senate.

For Carson, his week as the front runner has led to a new level of scrutiny that came like a shock of cold water. His Republican rivals, especially Trump, are less friendly than they used to be. The media is digging into his past. And because Carson has no political record to pore over, everyone is taking a closer look his oft-retold life story.

So far, the heat has come over three main issues: Carson’s involvement with a drug company, stories about childhood violence and a claim about a West Point scholarship.

The questions began during the Oct. 28 Republican debate on CNBC, when a moderator pressed him on his relationship with a drug company, Mannatech, that has been ensnared in legal troubles. “I have nothing to do with it. Zero,” Carson told TIME of the company. At the CNBC Republican debate, Carson reiterated, “I didn’t have an involvement with them.”

But “involvement” is a slippery term: Carson was never a paid endorser or spokesman for the company, according to his team and according to Mannatech, the Washington Post reports, but he did appear in promotional videos for the company and gave positive reviews of it in paid and unpaid speeches.

On Thursday, CNN uncovered seeming inconsistencies in Carson’s best-selling 1992 autobiography Gifted Hands. In the book, Carson describes “punching a classmate in the face with his hand wrapped around a lock, leaving a bloody three-inch gash in the boy’s forehead; attempting to attack his own mother with a hammer following an argument over clothes; hurling a large rock at a boy, which broke the youth’s glasses and smashed his nose; and, finally, thrusting a knife at the belly of his friend with such force that the blade snapped when it luckily struck a belt buckle covered by the boy’s clothes,” CNN describes.

In the book, Carson says that those encounters led him to rededicate himself to God. But CNN reporters who talked with nine friends, classmates and neighbors who grew up with Carson said they have “no memory of the anger or violence” described in the book.

Then on Friday, Politico posted a story claiming that Carson “fabricated” his “his application and acceptance into the U.S. Military Academy at West Point.” [Hours later Politico changed the story to remove the fabrication allegation.]

In Gifted Hands, Carson describes attending a Memorial Day parade in the spring of his senior year of high school. “Two soldiers who had won the Congressional Medal of Honor in Viet Nam were present,” he wrote. “More exciting to me, General William Westmoreland (very prominent in the Viet Nam war) attended with an impressive entourage. Afterward, Sgt. Hunt” — his high school ROTC director — “introduced me to General Westmoreland, and I had dinner with him and the Congressional Medal winners. Later I was offered a full scholarship to West Point.”

Read More: Ben Carson Would Get a Beer With Jesus

Politico found that West Point had no record of Carson’s application or acceptance. But the Carson team told TIME the initial Politico story was “an outright lie,” saying, “Dr. Carson as the leading ROTC student in Detroit was told by his commanders that he could get an Appointment at the academy. He never said he was admitted or even applied.”

It is true that Carson never says in Gifted Hands that he formally applied to the academy; just that he was offered a nomination and full scholarship, but decided not to apply because he did not want a military career. He reiterated in a Facebook post over the summer that he had received an “offer” from the school, writing, “I was the highest student ROTC member in Detroit and was thrilled to get an offer from West Point. But I knew medicine is what I wanted to do. So I applied to only one school. (it was all the money I had). I applied to Yale and thank God they accepted me.”

It is unclear how formal an “offer” could have been made by General Westmoreland or Sgt. Hunt to Carson, given that Carson did not apply to the school. Applications to West Point begin with nominations by a government or military official, and if the student is vetted and accepted, then all costs of attendance are covered.

“I agree the book passage is a bit unclear, but he was offered an appointment by a ROTC commander, and he rejected it,” added a spokesperson for the campaign. “That appointment, if he pursued it through the admissions process, is tantamount to a scholarship, which everyone at West Point receives.”

Carson is not the only Republican candidate facing renewed scrutiny. Florida Sen. Marco Rubio has also been hit with renewed questions about his attendance in the Senate and old questions about credit card debt. But Rubio, who has been in public office for 15 years, has experience in brushing off difficult questions and, more importantly, has heard most of them before.

For Carson, who loves to talk about his lack of political experience, this week has been a harsh introduction to the bruising world of politics.

This story has been updated to reflect the change in Politico’s original story. 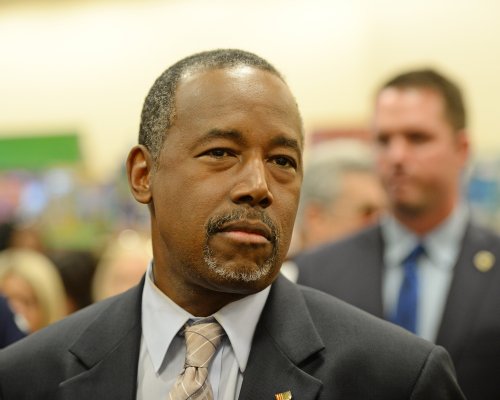