Admit it. Somewhere, deep down, you are ready for another round. Sure, the first two Republican debates were hard. But the liquor helped. And the worst parts—well, you don’t remember those anyway.

So here we go again. Ten candidates on a similar stage with entirely novel legal and recreational ways of blotting out the pain, if you live in a state like Colorado. CNBC and the Republican National Committee have chosen Boulder for the third Republican Presidential debate. It’s a bit like Democrats holding a debate in Oklahoma City. We strive, because we can, America.

Before the fun, the disclaimer: Do not play this game. It is meant to be read, not followed. If you adhere to these instructions, you will be ill. If you follow them in states that do not allow legal use of marijuana, you could go to jail. Never drive after imbibing, and don’t partake if you are underage. The science says pot really does mess with your brain, kids. Be careful.

The debate will start at at 8 p.m. Eastern time. CNBC is not allowing any legal streaming of the debate this time, so you probably have to watch with your parents. Cable subscribers only.

Take a drink or toke for each of the following:

With additional silly ideas from others in the TIME D.C. Bureau. 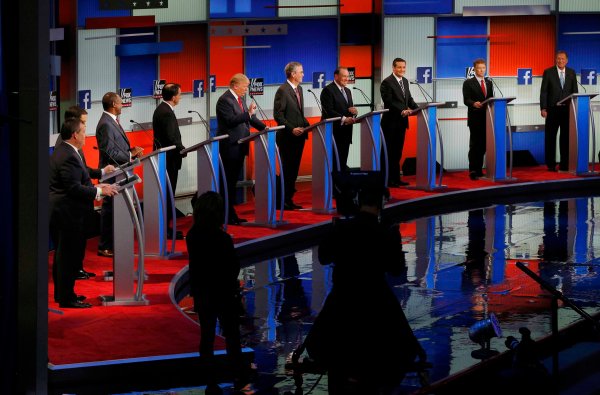 GOP Candidates Prep for Debate
Next Up: Editor's Pick