Your Guide to the CNBC Debate

It’s Republican debate day in Boulder, Colo., where 14 candidates will face off in two panels for the third time this cycle. Hosted by CNBC, the event is billed as the “Your Money, Your Vote” debate, but everything is on the table. The two-hour main contest comes as Ben Carson may be unseating Donald Trump at the top of the polls, and as their rivals struggle to gain attention in their presence. For many candidates, the issues-focused debate offers opportunities—allowing them to demonstrate seriousness on the issues most important to voters. For others, who have been short on policy specifics and heavy on bluster, there may be pitfalls as moderators promise to look for substance over sound bites. Here’s what to watch for at tonight’s debate.

One of Florida’s largest newspapers is calling on Marco Rubio to resign his seat in the Senate as he carries on his presidential campaign, citing his poor attendance and voting record, and well-documented distaste for the job. Rubio has struggled to defend his absence from Washington as he runs for president, offering differing explanations ranging from “votes don’t matter” to he “gets briefed by staff.” The scathing editorial is not what Rubio was hoping to read as he prepares for a break-out moment in the race.

John Kasich is dropping his nice-guy demeanor, telling an audience in Ohio before departing for Colorado Tuesday that he is “fed up” with the tone of the conversation in the Republican race and promising to speak his mind. The move indicates that Kasich, who has cast himself as the sober optimist in the race, is changing his strategy as he has failed to move up in the polls.

Latino Republican leaders say they are done with Trump and are threatening to abandon other candidates if they don’t reverse course on policies they deem anti-immigrant. A group of influential Hispanic activists met in Boulder Tuesday, where they warned candidates who embrace Trump’s ideas—from deporting all those in the U.S. illegally to eliminating birthright citizenship—that they will be unelectable if they don’t change their policies.

Latino Republicans Write Off Trump, Send Warning To Cruz
In meeting before debate, leaders call on GOP not to take Hispanic vote for granted [TIME]

Obama Pushes for Justice, Gun Reform During Police Conference Speech
TIME’s Maya Rhodan on Obama’s call for unity between police and the communities they serve

“They have to know that yes they will fail. If they are too big to fail then they may have to be broken up.” — Hillary Clinton on big banks in an interview on the Late Show with Stephen Colbert Tuesday

“I’m sticking with you people… Now if I lose Iowa, I will never speak to you people again.” — Donald Trump in Iowa Tuesday reflecting on his fall from first place in the polls in the early state 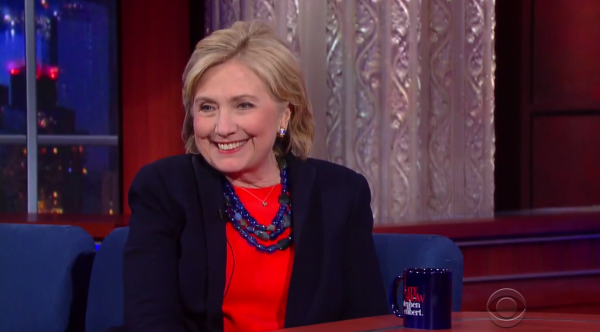 Here's What Hillary Clinton Likes to Binge-Watch
Next Up: Editor's Pick