Kylie Jenner: I Want to Be "an Inspiration for Young Girls"

All week, TIME is spotlighting some of this year’s Most Influential Teens with special interviews. Today: Kylie Jenner, who made the list for a second consecutive year on the strength of her notoriety online (with some 60 million social media followers) and her ability to catalyze trends in fashion and beauty.

Last year, when we first put you on this list, it didn’t sit well with a lot of people. Why do you think that is?

I think people expect a lot out of [me and my family]. Whether we’re influential for one reason or another, it is what it is. I know how influential I am over my fans and followers. I feel like everything I do, my hair color, my makeup, I always start these huge trends, and I don’t even realize what I’m capable of. I didn’t care what people had to say; I didn’t even read any of that stuff. People might have been upset because we were next to, like, young girls who started schools and crazy things. But we’re just different people! We’re influential in different ways, and that’s okay.

How has your life changed since then?

It’s gotten much bigger. I never thought that that could happen. But it keeps growing, which is awesome. I’m figuring out exactly what I want to do and becoming the businesswoman that I want to be. My lip kit is launching soon, and I want to have a successful makeup line. There’s a lot of exciting things coming up that I’m excited about. I’m becoming a woman, I have my own house, and I’m really coming into my own now.

A lot of your influence comes from social media. That’s great, because it allows you to control your image. But is it also limiting, because it’s so one-sided?

Yeah, absolutely. Having a reality TV show, and an app and Snapchat, people think they know exactly who you are. People think they have a perfect idea of who you are from a four-second Snapchat video…and fake blogs, stories, magazine covers. In reality, that’s not the case. Nobody knows who I am except family and my close friends. But it is what it is. People have to be sensitive to—I hate using the word “celebrities”—people in the spotlight. Because there’s so much more than what you see on the cover of a magazine.

Have things like the “Kylie Jenner Challenge” [when thousands of social-media users tried to mimic Jenner’s cosmetically enhanced lips using at-home suction tricks, often with shot glasses] made you change your approach to social media?

It has. With the shot glasses thing, that wasn’t even my influence, because I didn’t ever pick up a shotglass; that was a trend before my name was attached to it. Then people just started calling it the Kylie Jenner lip thing. I went on social media and said I was not down for this, I don’t approve of this. So weird. But I started taking a different approach a couple of months ago. I felt like bullying was my thing, and I’m passionate about it, and I want to help other young girls and boys going through the same thing. I felt like I could be—I don’t want to say a “leader,” but I could be. I’m going through the same thing you are, so we can go through it together.

Is that why you started #IAmMoreThan, your anti-bullying campaign?

Pretty much. I thought of the idea because, almost my whole life, since I was nine, since I’ve been in the spotlight, that comes with so much bullying and attacking. Everything I do, there’s a huge light on it. I’m okay with that because it is what it is, it comes with the lifestyle. [But] it has still affected me a lot. I wanted to take a different approach and pretty much let other people that I found who’ve been through bullying and overcome it, to use my platform and just kind of bring awareness to it.

How would you describe your talents to someone who doesn’t get it?

I just want to inspire my fans to be whoever they want to be, because that’s what I’ve always done. And they know that. I’ve been experimenting with my hair, with my lip colors. I have green hair one week, blue hair the other. I’m Gothic another week. I’m always experimenting and trying to figure out who I am and exactly what I want to be. I feel like it inspires them to be exactly who they want to be.

You do lead a very different life than most of your fans, though. How do you make yourself accessible?

That’s where my app ties in. I have all my outfits on there that I wear day-by-day and that I’ve worn in the past. And below it I’ve put—I find dope clothes that are looks for less. They look exactly like my clothes but cheaper, more affordable too. I love doing stuff like that. I’m always down to share my secrets, share my beauty tips. Most of the stuff my fans never knew I get from CVS and stores like that. It’s fun sharing all the stuff that I use! I don’t use crazy stuff. There’s always ways to do it for less.

Your app is the most popular of anyone’s in your family, including Kim Kardashian’s. What have you learned from Kim’s success?

Kim is so inspirational and she has the biggest drive. She’s so dedicated, she’s so smart, she’s such a businesswoman, and she’s always doing something and thinking of new ideas. She has inspired me to have a great work ethic.

And what do you do differently?

Kim’s older, she has a different fanbase, and she’s also—the difference between our apps is hers is very perfect. It’s simple, everything is black and white. Mine is more, I invite the cameras over and say, “Oh, hey, let’s just do this.” We do makeup tutorials and I’m laughing and talking. I know my fans are my age or younger than me, so, I just like to show my personality and show my fans my home and my dogs. I get really personal. I’m on Snapchat, and I’m just like them at the end of the day. Kim’s more private. She has kids. It’s just different.

You recently posted a video with your dad, Caitlyn, who’s obviously been through a lot this past year. What have you learned about yourself from her?

She’s always been a role model my entire life. I have always been so proud of her. Even recently, what I’ve learned the most about her is more personal. Just to be kind to everybody and to—when the spotlight’s on you, when I have as much fame as I do—to not make it about you. Get out there, do something, and help people. We were at lunch the other day. Literally, we became friends—she became friends—with the entire restaurant. We were talking to everybody—she treats everyone the same. She doesn’t belittle anyone. She will treat the waitress that was serving us the same way she’ll treat the photographer that shot her for Vanity Fair. She treats everyone the same, and it’s really inspiring.

What do you hope your legacy will be?

Do you ever wish you had a normal teenage life?

All the time. I dream about it. I never wish to have somebody else’s life—I was meant to have this life for a reason, and I’m going to make the best out of it. But I have normal friends. I sit at my house, and they practically live with me, and I watch them get ready to go to a high school party, hang out with their friends, go to concerts. I was [recently] sitting at home and my friend said, “Come to this concert right now! Wait… I forgot you’re famous.” I can’t just get up and go to a concert. I’ve never been to a concert like that with my friends. So there’s a lot of stuff I’ve missed out on, but there’s a lot of experiences [that I’ve had] that they were never able to experience.

So you’re comfortable in your own skin?

Yeah, I am. I think I am. I know I’m still young and finding myself, and I’m still growing up. But I’m okay with that, because it’s the best part of life, being a teenager. And I’m doing it with my fans. We’re all trying to find ourselves, growing up and making mistakes and trying something different. For me, it’s just a little different because everybody’s watching me. When I’m 25, hopefully I’ll know exactly what I want to do. But I’ll always want to have fun. That’s just my personality. 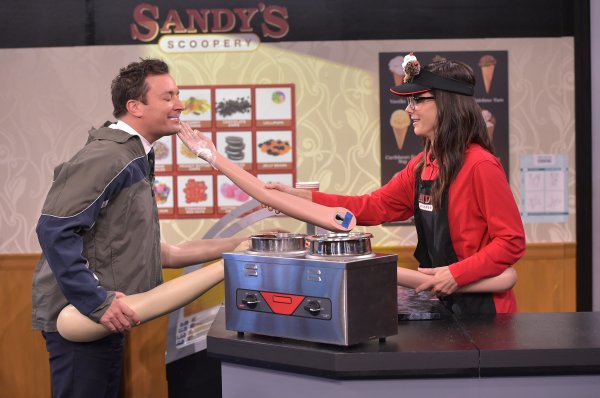 Watch Sandra Bullock and Jimmy Fallon Feed Each Other Ice Cream With Fake Arms
Next Up: Editor's Pick