Why Jeb Bush is at a Crossroads

Jeb Bush is meeting with top donors in Houston today as he hosts his third quarterly fundraising retreat with his father and brother. Bush’s campaign is at a crossroads after he slashed staff and salaries Friday in an effort to cut costs. He’s refocusing his campaign on New Hampshire, where—like they have nationally—his poll numbers have collapsed amid the rise of Donald Trump and Ben Carson as well as the slow-but-steady Marco Rubio. Bush sounded down about the race Saturday at an event in South Carolina, saying he isn’t interested in being the vehicle for voters to express their anger. “I’ve got a lot of really cool things I could do other than sit around, being miserable, listening to people demonize me and me feeling compelled to demonize them. That is a joke,” Bush said. “Elect Trump if you want that.” The line was the latest proof to what amounts to the Bush campaign’s core gamble: that come February, voters will look for a steady hand over a newcomer to lead the GOP.

Despite some unfounded speculation, Bush remains a long way from the exits, and his cash and establishment appeal still can’t be discounted in the race. His reshuffle revealed a long series of campaign missteps, but the errors were caught while many were still correctable (unlike Scott Walker’s late campaign). To be sure, the one-time front-runner will have to get scrappy, but there’s still room for a comeback story. Seeking to pep-up his donors, Jeb Bush and former President George W. Bush will host a question-and-answer session Monday after a presentation from the campaign’s senior staff.

Hillary Clinton and Bernie Sanders traded their sharpest barbs of the Democratic contest this weekend around the iconic Iowa Jefferson-Jackson Dinner. Clinton accused Sanders of sexism for suggesting she was shouting in the first Democratic debate, while Sanders took aim at Clinton over her inconsistency and hesitance on trade, gay marriage, and the Keystone XL pipeline. But Clinton, flanked by Bill Clinton and Katy Perry, was the star of the weekend, coming off a banner two weeks from the debate to the Benghazi hearing. She’s always been the prohibitive favorite to win the Democratic nomination, but with the field clearing of its also-ran candidates and the shadow of a potential Joe Biden run lifted, Clinton has more breathing room than ever. If anything, it’s a two-person race with Sanders, who will merely serve to keep Clinton on her toes, rather than make a serious threat for the nomination. Martin O’Malley, for his part, proved unable to shine in the event that once propelled Barack Obama to win the caucuses.

Biden talks about why he didn’t run. Rubio gives up on the Senate. And Trump targets Carson as his lead shrinks.

Rubio Gives Up on Senate: ‘He Hates It’
Why he’s missing votes [Washington Post]

Bush Family Gathers to Rescue Jeb
His famous family rallies around to attempt to revive his flagging campaign. [Politico]

“There was not what was sort of made out as kind of this Hollywood-esque thing that at the last minute Beau grabbed my hand and said, “Dad, you’ve got to run, like, win one for the Gipper.” It wasn’t anything like that.” — Vice President Joe Biden on his conversation with his late son Beau about running for president

“Rape and incest, I would not be in favor of killing a baby because the baby came about in that way. And all you have to do is go and look up the many stories of people who have led very useful lives who were the result of rape or incest.” — Ben Carson on “Meet the Press” Sunday 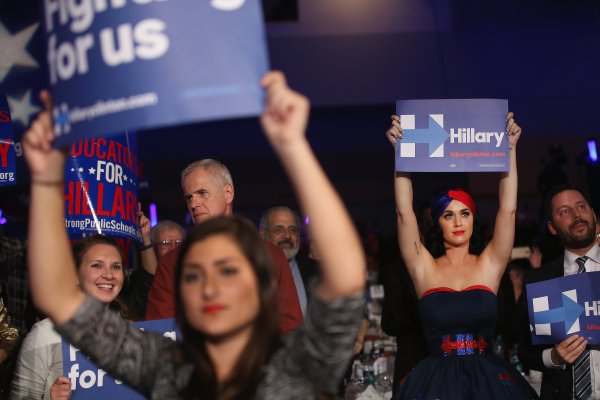