This Is How Patricia Became The Strongest Hurricane Ever Recorded

Hurricane Patricia—now the strongest hurricane ever recorded—surprised meteorologists as it transformed over the course of a day from a run of the mill tropical storm to a monster with sustained winds of up to 200 miles per hour. Now, meteorologists are pointing to heightened sea temperatures due to El Niño and global warming to explain how the storm caught them by surprise.

“Our models all showed it would become a fairly big hurricane but none of them got close to what was actually measured,” said Kerry Emanuel, professor of atmospheric science at the Massachusetts Institute of Technology. “We’re going to be scratching our heads for a long time about this storm.”

Surface temperatures across the Pacific Ocean have been elevated in recent months due to El Niño—a climate phenomenon that affects weather patterns across globe— by as much as 7ºF (4ºC), according to data from the National Oceanic and Atmospheric Administration (NOAA). The El Niño effect follows decades of increased water temperatures due to global warming. A report from the Intergovernmental Panel on Climate Change suggests that the top 200 meters of the world’s oceans warmed by about 4% between 1971 and 2010.

Warmer water increases the strength of storms by causing ocean water to evaporate. The increased water vapor in the air creates a fuel of sorts that allows storms to grow and travel.

The location of the storm may have also played a key role in allowing it to grow so strong, according to Emanuel. Every region of the ocean has a “speed limit” that a storm’s winds can’t exceed due a number of factors related to the physics, and this storm happened to develop in an area of the tropical Eastern Pacific Ocean with a particularly high speed limit. In other areas, such a strong storm would have been impossible. “There’s a speed limit to hurricane wind speeds that varies from place to place and time to time,” said Emanuel. “Very few storms make it. Patricia is right at that speed limit.”

While experts can explain after the fact how the storm got so powerful, they say storm predictions still need work. Current models aren’t great at forecasting how and when a storm will intensify. In this case, the strongest winds only extend 15 miles or so around the eye of the storm, making it difficult for devices in the ocean to pick up on the strength.

In the future, tropical residents should expect more frequent hurricanes of this scale. No individual storm is caused solely by climate change, but experts warn that the frequency of such large scale storms is likely to increase due to continued warming in the future. This year has already seen 22 category 4 or 5 hurricanes in the Northern Hemisphere, breaking the previous record of 18 in 1997 and 2004. Most of those storms have steered clear of the U.S., instead venturing out to sea. Wilma, which made landfall in 2005, was the last major hurricane to hit the U.S.

The scale of devastation caused by the storm will depend on which community it hits on the western seaboard of Mexico, but experts say that communities should expect 10 to 15 foot storm surges, flooding and mudslides. Tour hotspots like Puerto Vallarta are among the threatened areas that have begun evacuating. Typhoon Haiyan, a comparably sized storm, led to more thank 6,000 deaths when it hit the Philippines in 2013.

“This is the kind of thing that’s going to become statistically more likely as we go forward,” said Sean Sublette, a meteorologist at Climate Central. “What we’re seeing here is not just breaking some records by a little bit, but breaking them by a fair bit.” 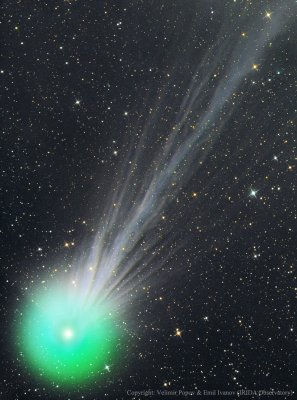 Scientists Have Found a Comet That Can Get You Drunk
Next Up: Editor's Pick