A Confident Clinton Goes on Offense in Democratic Debate

Former Secretary of State Hillary Clinton walked onto the first Democratic debate stage a weakened frontrunner. She departed confident and once again dominant.

After months of playing defense over her emails and questions about her trustworthiness and progressive credentials, Clinton took the opportunity to go on offense against her Democratic rivals as well as her Republican opponents.

The debate proved to be a far more substantive contest than the two Republican gatherings, as the Democrats sought to rebuild the coalition that twice elected President Obama. Weeks of debate preparation paid off for Clinton, who forcefully outmaneuvered her two principal opponents, Vermont Sen. Bernie Sanders and former Maryland Gov. Martin O’Malley.

In the lead-up to the debate, it remained an open question whether her rivals would directly attack Clinton. Instead, it was Clinton who came out swinging to expose their vulnerabilities.

As she has done throughout the primary, Clinton also sought to thread the needle between attracting liberal Democrats and avoiding positions that she might regret during the general election.

When Sanders made the case for his brand of populist authenticity, Clinton pitched herself as agreeing with him in principle but taking a more pragmatic approach. “I am a progressive,” she said, when pressed by host Anderson Cooper on her political beliefs. “But I’m a progressive who likes to get things done.”

When asked to name the enemy she’s proudest of making, Clinton rattled off a list that included the NRA, Iranians, health insurers and drug companies before saying that her final answer was “probably the Republicans.”

In a calculated move designed to appeal to the primary audience, Clinton aligned herself closely with Obama. When asked what policy differences she has with White House, she would not point to any, revealing a certain line of attack for Republicans next fall. “There is a lot I would like to do to build on the
successes of President Obama,” she said, promising to “go further” than the president on issues from banking regulation to immigration reform.

In a boon for Clinton, she also saw O’Malley and Sanders defend her from criticism over her use of a private email server at the State Department. “I think the Secretary is right,” Sanders said, in a line he has already started fundraising over. “And that is I think the American people are sick and tired of hearing about your damn emails.”

“Thank you, Bernie,” Clinton replied, with a laugh and a handshake.

In a sign of how much the debate revolved around Clinton, both Sanders’ campaign manager, Jeff Weaver, and his top advisor, Tad Devine, said after the debate that the moment was his strongest moment, while Clinton campaign chairman John Podesta said Sanders “probably gave himself an assist and he gave us an assist” with the line.

Read More: I Watched the Democratic Debate in Virtual Reality

When long-shot candidate Lincoln Chafee launched a lonely attack on her emails, Clinton was asked if she wanted to respond. Smiling ear-to-ear, she delivered a confident and simple “no.”

For Sanders, the debate stage was a welcome-to-the-big-leagues moment, and he struggled to perform under the lights. He opened the debate at a near-shout and faced tough moments defending his economic proposals from criticism on the right and his record on gun control from criticism on the left. His steadfast defense of his policy proposals will likely only energize his base of supporters, but he did little to expand his appeal to the rest of the Democratic Party.

Sanders’ past opposition to some gun control legislation offered Clinton one of her strongest moments in the debate. Asked whether the Vermont Senator has a strong-enough record on the issue, Clinton responded curtly, “No,” noting that he had opposed the Brady Bill gun control law. “Not at all. We have to look at the 90 people we lose a day from gun violence.”

From the beginning, Clinton rushed to undercut the insurgent Sanders on his criticism of capitalism, mocking his call to make the U.S. more like Scandinavia: “We are not Denmark. … We are the United States of America.” But she faced some criticism from Sanders and O’Malley for not going far enough in seeking to rein in Wall Street excesses.

In one of her weaker moments, Clinton struggled to explain her shifting positions over the years on the Trans-Pacific Partnership and the Keystone XL pipeline. “Like most people that I know, I have a range of views,” she said, offering Republicans another quote they are sure to cite next fall, “But they are rooted in my values and my experience.”

Clinton’s performance will be sure to reinvigorate her donors and supporters, who have watched wearily as Clinton has absorbed months of attacks. The candidate herself appeared to know she was doing well, laughing easily in between confident answers.

Sanders stuck closely to his stump speech during his responses, a strategy that proved unwieldy in key moments when Clinton and his other rivals found weaknesses. The chief rival to Clinton appeared to have a target on his back, as O’Malley who has fought to gain attention as a Clinton alternative fired back at Sanders’ suggestion that he didn’t know how things work in Congress because he was never elected to serve there. “And that’s a healthy thing,” O’Malley retorted.

For O’Malley the debate was his first introduction to the majority of Democrats, and while he had some strong moments, his soft-spoken style and refusal to repeat his frequent attacks on Clinton to her face raised more doubts about his potential to grow in this race.

Clinton deftly handled lingering questions about her vote authorizing the Iraq War, noting that Obama trusted her judgement when he put her in his administration. When O’Malley made a veiled attack, she was quick to interject, “I was very pleased when Governor O’Malley endorsed me in 2008.”

For Chafee, who admitted he didn’t know what he was voting for when he voted to repeal the Glass-Steagall legislation, and former Virginia Sen. Jim Webb, who spent much of his time on stage fighting with moderator Anderson Cooper over time, the debate was proof that they’re not long for this campaign.

Read Next: Read the Full Text of the Primetime Democratic Debate 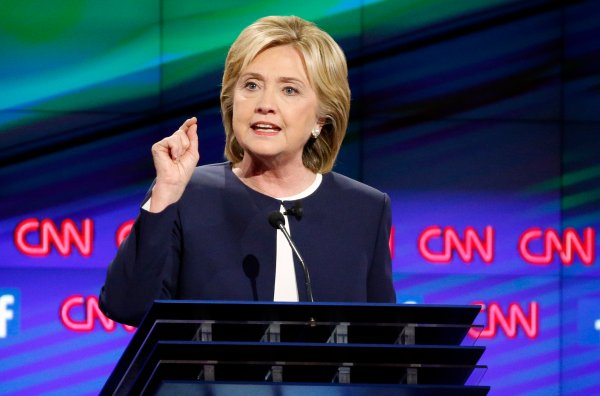 Watch Clinton's Most Memorable Debate Moments
Next Up: Editor's Pick