Jeb Bush, former Governor of Florida and 2016 Republican presidential candidate, speaks during the Scott County Republican party Ronald Reagan Dinner in Davenport, Iowa, U.S., on Oct. 6, 2015.
Daniel Acke—Bloomberg
Ideas
By Kareem Abdul-Jabbar
Abdul-Jabbar is a six-time NBA champion and league Most Valuable Player. He is the author of the new book, Writings on the Wall.

Watching the presidential candidates over the past couple months has been like watching an old sports movie with a desperate high school football coach whose best players have been carried out on stretchers and who must now dig deep into the bench of inexperienced or incompetent players. Each player he calls jumps up enthusiastically with a “I’m ready, Coach!” But as they take two steps onto the field, they trip, sprawling face-first in the dirt and knocking themselves unconscious.

The number of candidates tripping over their own twisted tongues and taking a dirt header keeps mounting. Carly Fiorina denounced Planned Parenthood over graphic abortion video footage she claimed was from the recent dump by Center for Medical Progress. Many news organizations called her out for misrepresenting the footage, which was from an undisclosed source and not part of the Planned Parenthood videos. Medical experts later said the video could have been a miscarriage. Ben Carson gave a speech at a university claiming that the Big Bang theory violates the second law of thermodynamics. Not true, says pretty much every physicist in the world. Donald Trump verbally abuses Mexicans, women, reporters, and anyone else who questions his scorched-earth march to Washington.

One might understand the lunkheaded statements by the first three because they have never held political office and therefore treat voters more like quivering employees who must agree or get fired. Bush, however, should have known better when he face-planted into the turf with this statement meant to lure African-American voters to the GOP: “Our message is one of hope and aspiration. It isn’t one of division and get in line and we’ll take care of you with free stuff. Our message is one that is uplifting — that says you can achieve earned success. We are on your side.”

Nothing is more refreshing or endearing to African-Americans than when a rich, privileged, white politician born into a political dynasty who never had nor ever will have to worry about money for the rest of his life, lectures us on what we want and how we think. Thank you, Bwana Jeb. If only Dr. Martin Luther King Jr. and Malcolm X had been so eloquent and insightful, we could have gotten off the “free stuff” cold turkey (unless the free stuff included a turkey).

While he’s at it, perhaps Bush can help Sigmund Freud, who said: “The great question that has never been answered, and which I have not yet been able to answer, despite my thirty years of research into the feminine soul, is ‘What does a woman want?’” Don’t worry, Sig-man, Jeb has got your back because he definitely knows what they don’t need. “I’m not sure we need half a billion dollars for women’s health issues,” he said a few months ago.

Remember, as governor of Florida, Bush took money from Planned Parenthood and gave it to abstinence-only education programs, which studies have shown to be ineffective. Even members of his own party worry over Bush’s attempts to out-Trump Trump as the GOP’s worst fumblemouth. In August, Politico reported this statement from GOP operative Craig Robinson: “Every time Bush has stuck his foot in his mouth, it’s been a ‘Clean up on Aisle 3’ moment. I think it shows a real lack of message discipline with Bush. We’ve seen more errors out of Jeb Bush this campaign than most of the other candidates.”

Lest we mistakenly think Bush’s characterization of freebie-lovin’ blacks was just a one-time slip, he said pretty much the same thing in his 1996 book, Profiles in Character: “The surest way to get something in today’s society is to elevate one’s status to that of the oppressed. Many of the modern victim movements — the gay rights movement, the feminist movement, the black empowerment movement — have attempted to get people to view themselves as part of a smaller group deserving of something from society. It is a major deviation from the society envisioned by Martin Luther King.” Oh, Marty, he zinged you there, my man. Except for the fact that Bush is talking about something entirely different than what Dr. King meant. Dr. King wanted everyone to have equal opportunity, but knew for that to happen in a society with an infrastructure of institutional racism, civil rights laws and government programs would be necessary to help even the playing field. Not free stuff, but freedom to thrive.

This “free stuff” was just Jeb Bush dusting off the long-disproved myth of the Black Welfare Mother in a desperate effort to appeal to conservatives before his campaign vanishes for good. Based on Bush’s statement, his book should have been titled Profiles in Caricature because there is no evidence, as he was suggesting, that providing welfare, Medicare, food stamps, or low-cost phones has any effect on low-income blacks voting for Democrats.

African-Americans may be more likely to be influenced by how much each party supports racial equality. A recent Pew Research Center poll shows that only 38% of conservative Republicans (and 42% of all Republicans) believe the U.S. needs to continue making changes to give blacks equal rights with whites. This is in sharp contrast to 78% of all Democrats who think we need to make changes to achieve racial equality.

Perhaps Bush also believes in ending the government’s “free stuff” to middle and upper class people in the form of assistance to pay mortgage interest. Following his own logic, Bush’s plan to cut taxes is like giving free money in an effort to buy/rent/lease voters. Everybody likes free stuff (hear me, Tesla Motors), and every politician offers free stuff in one form or another, but most voters—Republicans and Democrats alike—will vote according to their principles.

Bush’s statement is much more significant than just denigrating blacks. By perpetuating the myth of black voters as (1) willing to sell their vote for “free stuff” and (2) being too dumb to understand the larger political context in choosing a candidate to support, Bush has shown us his own “Profile in Lack of Character.” If he doesn’t know the research that prove his description to be false, then he’s tragically uninformed when formulating his political agenda. If he does know the facts, then he’s deliberately misrepresenting them in order to perpetuate racist stereotypes to grub for conservative votes. Either way, it calls into question his leadership ability.

Bush continued his eloquent “stuff” motif a few days ago after the shooting massacre at the Umpqua Community College in Oregon when he said: “Look, stuff happens. There’s always a crisis and the impulse is always to do something, and it’s not necessarily the right thing to do.” Again, Bush demonstrated not only his insensitivity but also his inactivity. Clearly, he was cautioning against gun control, which would alienate his conservative targets, but he offered no alternate suggestions for the 994 mass shootings in 1,004 days in the U.S. How much time does he need before he suggests some plan of action?

Jeb Bush’s lack of compassion or street-level economics reminds me of Mr. Pink (Steve Buscemi) in Quentin Tarantino’s Reservoir Dogs. He’s one of a group of bank robbers having breakfast at a restaurant before pulling a heist. As they divide the bill, Mr. Pink refuses to tip the waitress because he doesn’t believe in tipping (giving her free stuff). When the rest of the criminals argue, he doesn’t budge. When Mr. Blue says, “You don’t care if they’re counting on your tips to live?” Mr. Pink rubs two fingers together and says, “You know what this is? The world’s smallest violin playing just for the waitresses.”

This finger-rubbing concert mocking the working people is the kind of mute music of political expediency that this country doesn’t deserve. 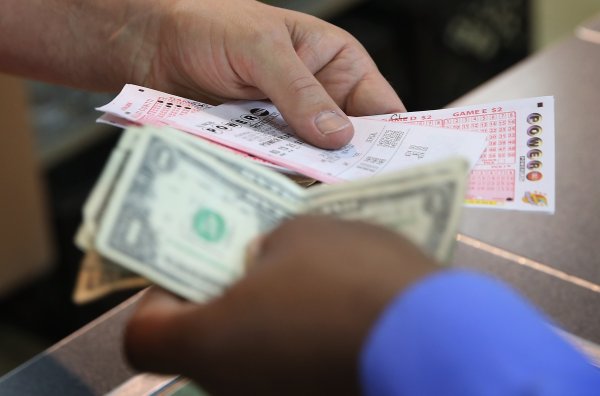 New Powerball Odds Are Part of America's Long Love Affair With Lotteries
Next Up: Editor's Pick