Danny Kim for TIME
By Eat This, Not That!

Willpower: It’s the key to successful weight loss, right? In fact, no. When it comes to battling the forces of food cravings, relying on your willpower is like facing down the Navy SEALs with nothing but a pointy stick.

In a new study, researchers at Rutgers found that overindulging—especially in high-fat foods—could be caused not by a lack of fortitude, but by an uncontrollable hormonal response triggered by an imbalance in the brain. Experimenting with mice, researchers showed that when they reduced the levels of a hormone called GLP-1 in the brain, the mice overate and craved high-fat foods. “These are the same areas of the brain that control other addictive behaviors like drug and alcohol abuse and nicotine addiction,” said the senior author.

So if you’ve been feeling bad about your lack of willpower, it’s time to grant yourself forgiveness. The only way to battle overeating is to have a series of strategic fight-back foods at the ready—foods that will keep your cravings at bay and your brain satisfied. The editors of Eat This, Not That! magazine have identified 7 foods that stop overeating in its tracks—before you can eat your way through an entire pint of moose tracks.

The Food That Shrinks Your Fat Cells: Green Tea

The more belly fat we have, the harder it is to control our appetite, according to a new study from the University of Florida. To fight back, attack belly fat with green tea. In one study, participants who drank 4-5 cups of green tea each day for 12 weeks lost an average of two more pounds than those who did not. Researchers say the unique catechins found in green tea trigger the release of fat from fat cells (particularly in the belly), and then speed up the liver’s capacity for turning that fat into energy.

If you’re on the verge of turning to the vending machine for a mid-afternoon snack, hop down to the local coffee shop instead. Even if your typical order is a latte, go for the cappuccino to kick cravings to the curb. Consuming foam-based foods and drinks can significantly reduce appetite and snack cravings, according to two separate studies. As it turns out, your gut and brain are pretty gullible, and air-injected fare tricks us into feeling fuller—without the need for additional calories. If you’re sensitive to caffeine and avoid it after lunchtime, rely on popcorn for the same filling effect at a small calorie cost.

The Food That Makes You Feel Fuller: Hummus

Legumes—including beans, chickpeas, lentils and peas—could keep you from the snack drawer until dinner, according to a review published in the journal Obesity. Researchers found that subjects who consumed ¾ to 1 cup of legumes daily felt as much as 31 percent fuller than those who abstained! But that’s not the only reason you’ll have iron willpower; chickpeas and hummus are not only packed with protein, but also give you an excuse to eat more fiber-rich vegetables. Bonnie Taub-Dix, RD, a New York City-based nutrition expert, suggests pairing hummus with fiber-rich veggies like snap peas, jicama, carrots or celery for an easy hold-over when you’re making dinner or waiting for take-out to arrive.

The Food That Suppresses Appetite: Avocado

Though it may seem counterintuitive to add fat to a meal if you’re trying to control your craving for fat, eating a moderate amount of monounsaturated fat, like that found in olive oil, avocado and nuts, can ward off the munchies and keep you full by regulating your hunger hormones. A study published in Nutrition Journal found that participants who ate half a fresh avocado with lunch reported a 40 percent decreased desire to eat for hours afterward.

This dairy pick is packed with more calcium than you’ll find in milk or regular yogurt, which is good news for your mood. Calcium gives your body the “Go!” command, alerting your brain to release feel-good neurotransmitters. As a result, inadequate calcium intake can lead to anxiety, depression, irritability, impaired memory, and slow thinking. Greek yogurt also contains more protein than regular yogurt, making it a terrific stay-slim snack.

The Food That De-Junks Your Evenings: Air-Popped Popcorn

Forget what your mom told you about warm milk: This popular remedy for sleeplessness could be making matters worse. The protein in milk boosts alertness. Plus, unless it’s skim, the fat in milk slows down digestion and makes sleep more fitful. Instead, air-pop some popcorn half an hour before bedtime: The carbs will induce the creation serotonin, a neurochemical that makes you feel relaxed. (Skip the butter—fat will slow the process of boosting serotonin levels.) This air-injected snack also satisfies late-night urges to munch while sparing your waistline the damage that comes from typical go-tos like chips and cookies.

The Food That Balances Your Gut: Bananas

If you munch your way through stress and sadness like other people bite their nails, reach for the bananas. Scientists believe that depression may be caused in part by unbalanced gut microbes, since 95 percent of our feel-good hormone serotonin is also located in the belly, and bananas are one of the best belly-balancers around thanks to their high resistant starch content. This type of carbohydrate, as the name suggests, resists digestion. Bananas and plantains have the highest level of resistant starch of any fruit, so throw one in your bag before a big day in the office.

More from Eat This, Not That! 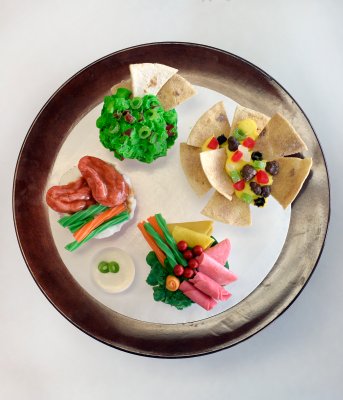 Here's Why Salads Feel Feminine and Nachos Seem Manly
Next Up: Editor's Pick