There’s no neat term to sum up the crowds rushing borders, the temporary villages springing up at rail stations, the heart-rending sight of a drowned child—but, at the moment, “migrant crisis” seems to be what the world has decided to call the situation facing Europe right now.

That language has become more important recently as the waves of people currently seeking refuge from strife and poverty in areas like Syria draw new attention to the terminology used to describe them. In particular, the question of whether the drowned boy whose photo galvanized observers this week should have qualified for asylum in Canada has underlined the difference between a “refugee” and a “migrant.” According to the United Nations, the distinction is this: a refugee is running away from something and a migrant is voluntarily seeking something.

That definition goes back to an earlier international refugee crisis: the one that followed World War II. The 1951 Refugee Convention, which set forth international protocol on how to deal with refugees and has since guided the U.N.’s work with people seeking asylum, was a product of post-war chaos —and, at that point, the U.N. definition of “refugee” meant something extremely specific.

In fact, the term referred only to people who had already been classified as refugees by the International Refugee Organization (a U.N. group that was disbanded shortly after 1951) or who were already outside their homelands “as a result of events occurring before 1 January 1951.”

Like today, many of those so-called “displaced persons” were bound for Germany. As TIME reported in 1952:

And yet, even so soon after World War II and the establishment of the United Nations, it was quickly clear that the world wasn’t done creating refugees. Setting up a system that could only help people who needed asylum due to a past war was clearly not a long-term solution.

Whether that definition should apply to the people coming to Europe today is a matter the world must now face. But, as anthropologist Ruben Andersson suggested to the Associated Press, the most important terminology of all may be one with a much simpler definition: “people.”

Read the full story from 1952, here in the TIME Vault: The Unwanted 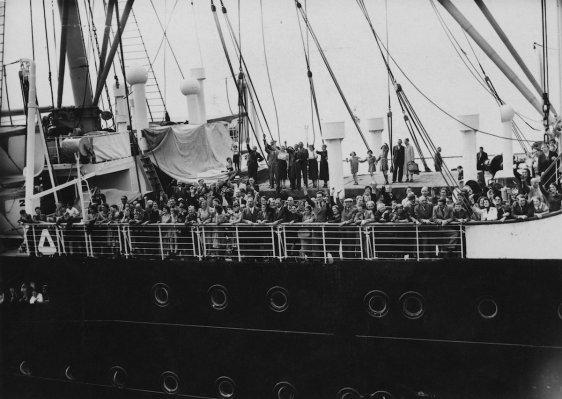 The Long, Sad History of Migrant Ships Being Turned Away From Ports
Next Up: Editor's Pick