A young child cries as hundreds of migrants try to board a train at the Keleti Railway Station on Sept. 3, 2015 in Budapest.
Petr David Josek—AP
By Tessa Berenson

European leaders clamored for a swifter response to the migrant crisis this week as a spate of recent tragedies brought the worsening situation into the global spotlight.

Germany and France reached an agreement Thursday and called for Europe-wide migrant quotas, saying that each country in the European Union needs to “share the tasks,” Bloomberg reports.

“Germany is doing what is morally and legally required of us, no more and no less,” German Chancellor Angela Merkel said Thursday. “That’s why this problem concerns all of us in Europe.”

Another recent decision by Germany highlights the challenges this crisis poses to the entire region: Germany announced that it would allow Syrian refugees to stay and apply for asylum rather than be deported to the European country where they first arrived. Germany’s decision conflicts with the Dublin Regulation, an E.U. rule that says refugees must stay in their initial European country of arrival until their asylum claims are processed. The call for country-by-country quotas would address a problem arising under the Dublin Regulation, in which nations like Italy and Greece, which are the easiest to access by the Mediterranean, end up bearing the brunt of the burden.

British Prime Minister David Cameron also weighed in on the issue Thursday, saying, “Britain is a moral nation and we will fulfill our moral responsibilities,” BBC reports.

Cameron referenced the disturbing photograph of a drowned 3-year-old boy washed up on the beach, which went viral online Thursday. The boy was one of 12 migrants who drowned trying to reach a Greek island from the Turkish coast on Wednesday, and the shocking photograph is putting further pressure on European governments to address the crisis. Cameron said “as a father [he] felt deeply moved” by the image.

But not all countries in Europe are in agreement on how to handle the influx of refugees. Some countries reject Germany and France’s quotas proposal, including Hungary, which called the migrant crisis a “German problem” during a tense standoff at the Keleti Railway Terminus this week. Two-thousand migrants had been stopped by Hungarian authorities from traveling further into Europe, many wanting to go to Germany. Hungary reopened the train station Thursday, but held an emergency session of Parliament to debate its role in the migrant crisis. Hungary has also erected a barbed wire fence along its border with Serbia, where many refugees enter the country.

The migrants flooding Europe mark a wave of global displacement not seen since World War II, according to the Associated Press. More than 350,000 refugees have arrived in Europe this year, CNN reports. But many perish on their journey. There have been more than 3,600 migrant deaths this year, more than 2,600 of which occurred as people tried to cross the Mediterranean into Europe. As the number of migrants and fatalities continues to soar, Europe will be pressed to take action. 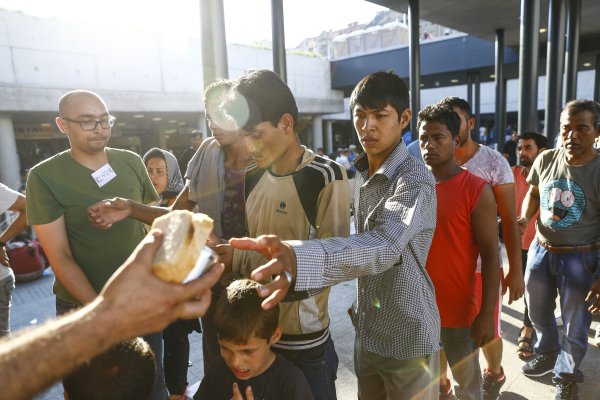 Europe to Meet for Emergency Talks on Refugee Crisis
Next Up: Editor's Pick