How Eagle Scouts Have Made Their Mark on America

Arthur Eldred might have been a Wolf Scout if leaders of the Boy Scouts of America hadn’t changed their minds about the youth program’s top merit badge. They turned the wolf into an eagle, which seemed more American, according to Scouting magazine, and on this day, Sept. 2, in 1912, 17-year-old Eldred became the nation’s first Eagle Scout.

“His left coat sleeve is so covered with medals that there is scarcely room for another one,” the Times noted. “He is, the judges decided, a 100 percent scout.”

The Boy Scouts of America is itself a 100 percent American institution, incorporated in 1916 via Congressional charter, as are a handful of other “patriotic and national organizations,” including the American Legion, Future Farmers of America, Little League Baseball and the Girl Scouts.

And although, 50 years after its founding, TIME noted that “contemporary cynics” regarded scouts as “a rustic army of bug-eyed idealists,” some of those idealists have gone on to make history — especially from among the elite group, who, like Eldred, earned the 21 merit badges required to achieve scouting’s top honor.

Other notable Eagle Scouts have included:

Read a 1937 cover story about the Boy Scouts, here in the TIME archives: Scouts: National Jamboree 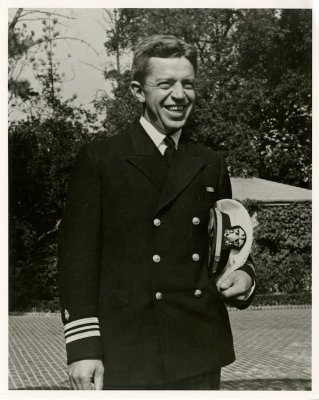 Read an 11-Year-Old's Heartwarming Essay About His Father's Return From World War II
Next Up: Editor's Pick