It may not exactly be Trump’s platform that is attracting voters. He’s been purposefully vague on the campaign trail about how he’ll fix the many problems he sees in America. His campaign website appears to talk more about his success as a businessman than his specific plans for the White House.

That’s likely all by design, according to marketing and advertising experts. The very things Trump is doing that look like political suicide are only reinforcing his brand as a no-nonsense boss who does whatever he wants. It’s an image he’s been cultivating for decades and which now seems to be resonating with a large number of American voters.

Marketing experts can categorize pretty much any brand (and politicians are certainly brands) into one of 12 archetypes based on research by the Swiss psychiatrist Carl Jung: Sage, Innocent, Explorer, Ruler, Creator, Caregiver, Magician, Hero, Outlaw, Lover, Jester, and Regular Guy/Girl. Most politicians are either all-knowing Rulers or spread-the-wealth Caregivers.

MORE: Here’s Roughly Every Controversial Thing Donald Trump Has Ever Said Out Loud

Trump is better categorized as an Outlaw, according to Edward Boches, professor of advertising at Boston University. He doesn’t operate according to the traditional rules of politics and is openly hostile to his adversaries, much like the freewheeling boss character he plays on his reality TV show The Apprentice. “A lot of people wish they could be that egotistical and get away with it,” Boches says. “We’re not necessarily envious but enamored by that, the fact that someone can pull that off.”

…but he’s also a “Creator” of wealth

Trump’s brashness would get him nowhere if he didn’t have a track record to back it up. With no political record to speak of, Trump uses his wealth as proof of his credentials. That also makes him a “Creator” as a brand archetype and could make him seem like a more accomplished figure in some voters’ eyes compared to lifetime politicians. “Being a creator–building things out of nothing–and doing it on your own terms, are inherently American,” says Boches. “They represent independence and a desire to get ahead. I think people really gravitate to that aspect about him.”

He’s a symbol of success

In everything from reality TV to rap songs, Trump’s name and face have become a kind of shorthand for wealth and success. He’s created a sense, real or not, that there’s no sector he can’t conquer, including the political arena. “As a brand, the fact that he has success at such a high level, people probably think that that can translate into any endeavor that he takes on,” says Tor Myhren, worldwide chief creative officer of the ad agency Grey. “That’s very attractive to people.”

He speaks his mind

Trump has called Mexican immigrants rapists, mocked prisoners of war and made disparaging remarks toward women during his campaign. Those are the kinds of incendiary faux pas that would sink a regular campaign. But Trump hasn’t backed down from any of his statements, which may make him even more appealing to a certain sect of voters. “Middle America abhors the idea of political correctness,” says Mike Sheldon, North American CEO for Deutsch. “They feel victimized by all the victims out there. In a way, I think he’s like their secret microphone.”

In an age of ongoing Washington gridlock and high partisanship, there’s a sense among many that every high-level politician has compromised their ideals at some point or another. Trump has no political record so opponents can’t say he’s flip-flopped on issues. And since he’s funding his campaign himself, voters may perceive him to be separate from the typical moneyed interests that control Washington. “We’re attracted to his lack of sponsors,” says Sheldon. “It’s like a NASCAR vehicle with no logos on it.” 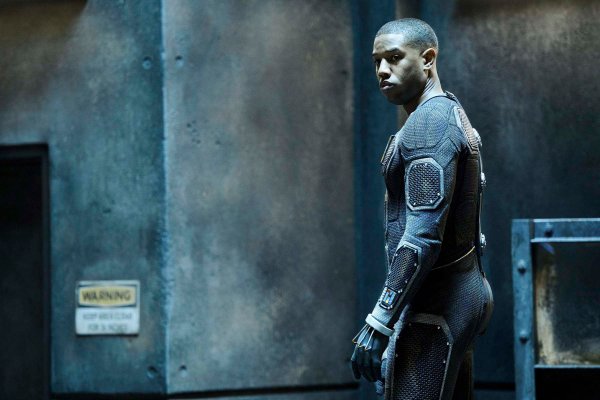 Fantastic Four Meets Doom at the Box Office
Next Up: Editor's Pick