The actress Sharon Tate first made news as the star of movies like The Fearless Vampire Killers, which TIME mocked as “blood on the soapsuds” fare. But her name went down in history—and she became both the subject of a Mad Men conspiracy theory and a major character, played by Margot Robbie, in the Quentin Tarantino movie Once Upon a Time … in Hollywood—for a different reason: as the victim of one of the grisliest murders imaginable.

Shortly after Tate’s body was discovered on Aug. 9, 1969, TIME reported that five bodies had been found at the home of director Roman Polanski—who wasn’t there at the time—and that the count included Polanski’s pregnant wife, Tate, “clad in a bikini nightgown.” A cord around her neck joined her body to another victim’s, and they appeared to have been “stabbed or shot” to death.

“The brutality of the killings shocked even homicide-squad detectives,” TIME noted. Shocked Hollywood denizens began to hire extra body guards. Their terror only increased when the full extent of the horrific scene came to light.

It turns out the crime was “far bloodier and grimmer” than the police had initially admitted, TIME reported in the following week’s issue. Even decades later, the description is not for the faint. Tate and the victim to which she was tied, Jay Sebring, had been repeatedly slashed. Bullets filled the ceilings and blood covered the floors. Tate’s sleepwear was skimpier than first acknowledged, and “[one] of Miss Tate’s breasts had been cut off, apparently as a result of indiscriminate slashing,” TIME added. “She was nine months pregnant, and there was an X cut on her stomach.”

In fact, however, the coroner’s testimony at the murder trial would make clear that she received multiple chest wounds, including around the breast, but it was not “cut off” and her stomach was not carved. In later decades, experts on the case would single out this part of TIME’s coverage as particularly exaggerated.

Rumors swirled, first about a caretaker for the property and then about the “sex, drug and witchcraft cults” that had some reported ties to the “offbeat” Hollywood crowd of which Tate and Polanski were part. Within days, two more bodies turned up at a “carbon copy” crime scene, thought to be the work of a copycat killer. By the end of the year, however, the rumors coalesced into a real case. Los Angeles police were able to pin the crimes on “a mystical, semi-religious hippie drug-and-murder cult led by a bearded, demonic Mahdi able to dispatch his zombie-like followers.” That cult leader was Charles Manson.

Though Tate has since regained some of the fame she once had in her own right—as the subject of a Mad Men conspiracy theory that failed to pan out, for example—her name and Manson’s would forever be linked.

Read the first story from 1969, here in the TIME Vault: “Nothing but Bodies”

The original version of this article mistakenly failed to acknowledge errors made in the original TIME reporting on the murder of Sharon Tate. Though Tate’s death was attributed to stabbing, a coroner testified that she was hanged as well; though early reports indicated otherwise, the rope found around her neck did serve that purpose. In addition, the magazine’s Aug. 22, 1969, description of the crime scene mischaracterized Tate’s wounds and her state of undress; she was wearing bikini-style sleepwear, the slashings did not result in the full removal of one of her breasts, and crime scene photos do not show evidence of the deliberate carving of an “X” on her stomach. 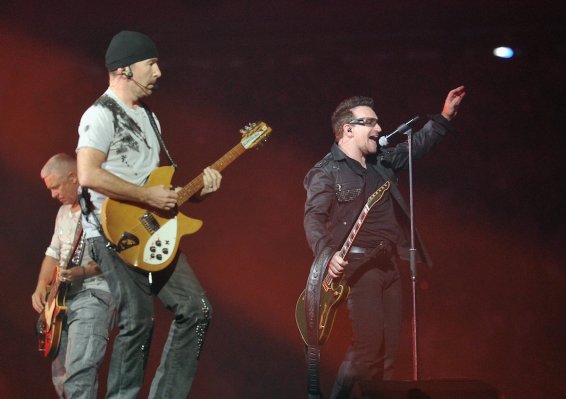 The Backstory to U2’s Record of Activism
Next Up: Editor's Pick