All the Mad Men Conspiracy Theories That Didn't Come True

Mad Men, which airs its final episode Sunday night, has long been a show that’s embraced mystery: Things are left unsaid, characters behave erratically, changes come suddenly in a manner that feels more like life than like tightly plotted television. It’s no surprise, then, that the series has prompted a great deal of speculation about potential twists that never quite happened, or character identities that were more convoluted in the minds of fans than in the show’s reality. It’s a testament to Mad Men‘s power over its audience that the series was able to live so vividly in the minds of fans, and a testament to the show’s control that most of the more lurid theories didn’t come true. (Some, like the notion that Don is set to become famous air hijacker D. B. Cooper or Alcoholics Anonymous founder “Bill W.,” seem unlikely but still might.) Here are some of the theories that didn’t pan out.

Megan Draper is Sharon Tate: Probably the most famous of all Mad Men hypotheses, the theory that Don Draper’s wife was meant to be a stand-in for the slain wife of Roman Polanski caught fire during the show’s sixth season, after Megan wore a shirt identified with Tate. “It’s just not part of the show. No one’s going to die,” said showrunner Matthew Weiner, which failed to calm the speculation that Megan was doomed (though in the world of the show, she’s still very much alive).

…or a ghost: There were those fans who were so convinced Megan Draper was meant to die that they imagined she was already dead, and that her appearances were simply Don’s fantasy life. Dream sequences on Mad Men are rare, but not unheard-of, but if this turned out to be true (which it could, maybe, be?), Megan would have to be a delusion shared by several people (she’s appeared in scenes without Don present). Chalk this one up to a zealous desire for Megan to mean more than herself.

Bob Benson has nefarious motives: The accounts man’s over-the-top niceness was widely read as masking some boundless evil, or at least a plan that would be deeply inconvenient for his co-workers. This Vulture post summarizes all the thinking around Benson: That he was an investigative journalist, a spy, or a murderer. It was eventually revealed that Benson was none of those things, just a striving sort looking to better his position in the world, a story that was more interesting than the more lurid one fans imagined.

Don is a murderer: Many fans had a hard time moving past Don Draper’s fantasy murder of an old flame, which he imagines himself doing while sick with a fever. Indeed, one writer, who has a book to her credit about the psychology of the series, wrote in Psychology Today that it was unclear whether or not Don had actually killed poor Andrea. “If the strangulation was part of a dream sequence, it was likely caused by Don’s guilt. […] Exactly what happened in the Drapers’ bedroom is unclear.” Unfortunately for all hoping it’s ambiguous, and that Don might have one more murderous story to tell in the finale, Weiner told TIME: “Don Draper doesn’t kill people.”

Peggy is the secret star of Mad Men: There’s still one episode that could radically redefine our understanding of the show. But the final stretch of episodes, though they’ve provided Peggy some great moments, have not put Peggy forward as the show’s central figure, as many online and a New York cover have suggested. The show is still really about Don, for better or for worse! 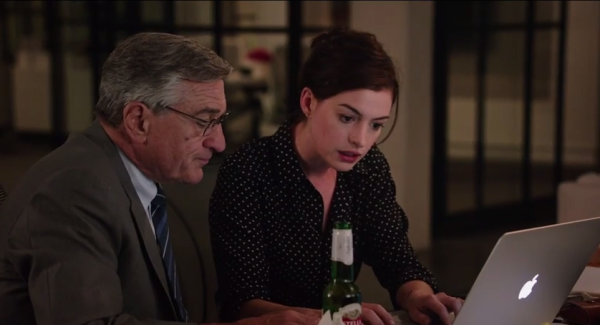 Watch Anne Hathaway and Robert De Niro Bond in The Intern Trailer
Next Up: Editor's Pick