Men Are the Forgotten Grievers in Miscarriage

Ideas
By Sarah Elizabeth Richards
Richards is a journalist who frequently writes about genetics and the author of Motherhood, Rescheduled: The New Frontier of Egg Freezing and the Women Who Tried It.

Priscilla Chan and Mark Zuckerberg’s revelation last week that they had suffered through three miscarriages before she became pregnant earned widespread praise for their willingness to discuss an often hushed topic. Even more astonishing: It was a man sharing his emotions. “It’s a lonely experience,” Zuckerberg wrote in a Facebook post. “You struggle on your own.”

The medical community increasingly recognizes the emotional toll of the 15% to 20% of pregnancies that end in miscarriage, and celebrities from Beyonce to Nicole Kidman and Mariah Carey have publicly discussed their private grief with pregnancy loss. Yet this new culture of openness has mostly focused on women’s suffering.

“Men are the forgotten grievers,” explains Sharon Covington, director of psychological support services at Shady Grove Fertility Center in Washington, D.C. “Women usually get the attention. It’s often a medical crisis, if she needs a D & C.,” she says, referring to the dilation and curettage procedure that might be required to remove tissue from the uterus. “Also, women are more likely to show their emotions.” She says she often sees patients who embrace the stereotypical gender roles often exemplified at traditional Irish wakes. “Women grieve and wale. Men stand at the distance and drink their whiskey,” she says.

Research shows that men do process the emotional trauma of pregnancy loss differently. A handful of studies have found that they also suffer from anxiety and depression, albeit at less consuming levels and for shorter periods of time. One British study of 323 men, however, found although they displayed less “active grief” than their female partners, they were more vulnerable to feelings of despair and difficulty in coping eight weeks following the loss. (The grief level was higher the longer their partners’ pregnancy and also higher if they had seen an ultrasound scan.)

“Men don’t grieve in that they don’t feel the failure of their body. Women’s grief is more intense and self-blaming,” explains Irving Leon, a psychologist who specializes in reproductive loss and an adjunct associate professor of obstetrics and gynecology at the University of Michigan. “Men aren’t as oriented to express the loss. They’re afraid they if they show hurt or sadness, it will bring the wife down.”

In one survey of 40 men, 59% said they had a deepened awareness of the fragility of life, 45% mourned the loss of their family’s hopes and dreams, 50% reported they did not share feelings with their partner, and 40% reported a strong sense of vulnerability and powerlessness to help their wife.

Yet it’s critical men get help, too. Not only is their own mental health at risk, their isolation can hurt their partners’ well-being and destroy their relationships. One study showed that some men who had more difficulty coping following a miscarriage were vulnerable to a “delayed grief response” two years later. Then there’s this link: Six months after a miscarriage, the women who were most depressed had partners who were least likely to talk about the loss. Not surprisingly, women who perceived their partners as caring and willing to share their feelings about miscarriage, were closer, and had more sex a year after the trauma.

Over the years, Covington has tried offering men’s support groups, but too few men showed up to keep them going. She’s had more success with co-ed groups for pregnancy loss where men feel more comfortable attending with their partners. During her group and private sessions, Covington stresses the importance of creating mementos or rituals to acknowledge the child they never got to know. “It’s a different kind of mourning,” Covington explains. “You’re not grieving memories. You’re grieving the hopes and dreams you had for this baby. You have to make the loss real to you and find a way to express it.” She encourages patients to write farewell letters and then bury or burn them in a fireplace or tear them up into little pieces and throw them into a stream.

When Ryan McKeen, 35, and his wife were devastated from two miscarriages — one at six weeks and another at 12 weeks — following infertility treatment six years ago, a nurse recommend they see a counselor. “Guys don’t talk about it. I was trying to be there for my wife, but I realized I had these terrible feelings of loss, too,” says McKeen, a lawyer from Connecticut. “When you lose a dog, people give you card. Nobody gives you a miscarriage card. There’s not a birth or death certificate.”

When men are more willing to share their stories, the public is hungry to hear them. Marcus Brotherton’s 2013 blog post “How a Man Handles A Miscarriage” generated nearly 6,500 Facebook shares and 290 comments.

And Zuckerberg’s post has received nearly 1.7 million “likes” so far. “In today’s open and connected world, discussing these issues doesn’t distance us; it brings us together,” he wrote in his Facebook post. “It creates understanding and tolerance, and it gives us hope.” 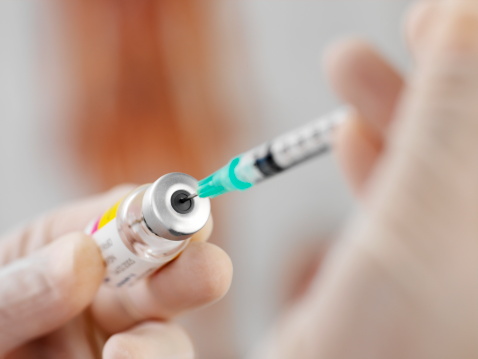 Vaccinations Have Always Been Controversial in America
Next Up: Editor's Pick