Anyone who’s ever passed a kidney stone before has probably wondered how something so small (usually, anyway!) can cause so much pain. Unfair, we know. About 1 in 11 people will suffer from a kidney stone in their lifetime—and once you’ve already had one, you’re about 50% more likely to have another. More bad news: At one time, stones primarily affected men, but new research shows that this gender gap has almost closed, possibly due to the rise in obesity.

What are kidney stones, exactly?

Most kidney stones are a solid mass of minerals that have congealed and lodged itself somewhere in your urinary tract. The majority of them are made of calcium—usually a combination of calcium and oxalate, but, in rarer cases, calcium and phosphate—and, to a much lesser extent, uric acid.

Now for the good news: With a few dietary and lifestyle tweaks, you might be able to slash your odds of ever suffering from a kidney stone again—or, even better, prevent one entirely.

Since calcium is present in most kidney stones, it makes sense to just cut the nutrient right out of your diet, right? Nope. That was the old thinking. Now experts know that people who consume more calcium are less likely to encounter a kidney stone than those on low-calcium diets, according to one 2013 study by researchers from Harvard Medical School. “It’s all about balance,” says Mantu Gupta, MD, the chair of urology at Mount Sinai Roosevelt and Mount Sinai St. Luke’s Hospital. Dr. Gupta goes on to explain that if your diet is deficient in calcium, chemicals called oxalates, which normally bind to calcium in the digestive tract, will instead bind with calcium in the urine and trigger the formation of stones.

You eat all the right things, only to end up in a urologist’s office. What gives? Oxalates, again. These substances are found in leafy greens like spinach, rhubarb, and beets. Ideally, those oxalates will bind with calcium in your intestine and be shuttled out of your body via your urinary tract, says Roger L. Sur, MD, director of the University of California San Diego’s Comprehensive Kidney Stone Center. But when the amount of oxalates is too high, these chemicals can concentrate in the urine and lead to a stone formation. That’s not to say you should give up veggies, of course. Talk to your doctor about possible food swaps for lower-oxalate foods—for example, kale instead of spinach or cauliflower in place of amaranth.

Out of all the potential problems caused by too much salt, kidney stones are probably last on the list. But when your sodium intake rises, that can also trigger an increase in the amount of calcium your kidneys excrete. Translation: A build-up of calcium in the urine, which increases the risk of kidney stone formation, says Brian Stork, MD, a urologist and spokesperson for the American Urological Association. Experts recommend that most people limit their sodium consumption to 2,300 milligrams per day, but other people, like those with high blood pressure, should lower that to less than 1,500 milligrams per day.

If you can’t remember the last time you had a lemon or grapefruit, consider this a reason to up your intake: Citrus fruits contain a compound called citrate, which is thought to help lower the risk of some kidney stones, says Dr. Gupta. Plus, one study in the journal Nature found that when people who normally avoided produce added fruits and vegetables into their diet for one month, they decreased the amount of kidney-stone-causing chemicals that were present in their urine. Try adding a lemon or lime wedge to your water daily, says Dr. Gupta.

On the other hand, eating too much poultry and red meat can also put you at risk for stones: One 2014 study in the journal Nutritional Epidemiology found that vegetarians and fish-eaters were 30 to 50% less likely to have kidney stones than people who ate about 100 grams of meat per day (think: a steak and a half). People who load up on meat might be crowding out fruits and vegetables from their diets—a mistake, since produce contains magnesium, which can also prevent stones from forming.

Living in the South

The Southeastern United States might be known as the Bible Belt, but urologists have another name for it: the kidney stone belt. One oft-cited study published in the American Journal of Epidemiology in 1996 found that people living in this area had nearly double the risk of stones as people living in cooler regions of the United States. Blame the hot, arid climate: “Because the temperatures are higher, people in the South can lose more fluid through sweat and become dehydrated,” says Dr. Gupta. When you aren’t drinking enough water, there will be a higher percentage of minerals in a lower amount of urine, increasing the likelihood that those minerals will bind together to form a stone.

Too much iced tea

Another strike against the sweet-tea-loving South. A 2015 report in the New England Journal of Medicine about a 56-year-old man who was rushed to the hospital for kidney failure after drinking too much iced tea shocked the Internet. And as it turned out, black tea (one of the most popular kinds in the U.S.) is also a major source of oxalate, which can cluster in the urine to form kidney stones. This man was drinking about 16 8-ounce glasses of black tea daily, which is at least double the average person’s daily intake. If you’ve had a kidney stone before, ask your doctor about limiting your consumption to one 8-ounce serving a day, says Dr. Gupta, who also notes that people with super high levels may have to cut it out of their diet completely.

A can of soda

Normally, staying hydrated is one of the smartest ways to avoid kidney stones because it dilutes kidney-stone forming substances: (That’s why experts say that drinking about eight glasses of water a day is one way to prevent them from forming in the first place.) But not all beverages are created equal: One 2013 study found that downing even one sugary-sweet soda a day can increase your odds of developing kidney stones by 23%. Researchers think that the fructose (a sugar) in sweetened drinks causes an increase in kidney stone-causing chemicals. Stick to water, minus the sugar.

Here’s something else to thank mom and dad for: If either parent has had a kidney stone, your risk increases as well. Sure, families have similar diets, but there’s a biological reason as well. “Like obesity or diabetes, there are multiple genes involved, and oftentimes, people inherit the inability to efficiently absorb oxalate from their parents,” says Dr. Gupta.

People with inflammatory bowel diseases tend to have a higher risk for stones than those without these serious conditions, and one 2013 study in the International Journal of Nephrology and Renovascular Disease found that those with Crohn’s disease and ulcerative colitis were especially at risk. One reason: These conditions are accompanied by diarrhea, which can increase a person’s risk of dehydration—and, in turn, up the percentage of kidney stone-causing chemicals in lower amounts of urine, says Dr. Stork.

Using too many laxatives

Laxatives have existed for over 2,000 years, and people have been abusing or misusing them that entire time, according to a 2010 study published in the journal Drugs. Older people dealing with constipation who believe they need to have a bowel movement daily for good health comprise a significant number of laxative abusers, but the largest group, by far, is made up of people suffering from anorexia or bulimia. Laxative overuse may interfere with your body’s ability to absorb nutrients and medications, and may also bring on an electrolyte imbalance—and it’s been linked to kidney stones, says Dr. Sur. Using too much of these meds may cause people to become dehydrated, which could trigger a stone.

People who take topiramate (found in the prescription med called Topamax) can be more likely to have kidney stones than those who don’t take this drug, says Dr. Sur. One 2006 study in the American Journal of Kidney Diseases found that topiramate can increase the pH levels in the urinary tract, which may lead to an increased risk of kidney stone formation. (Talk to your doctor before making any changes to your medication regimen.)

Obese women may be about 35% more likely to develop kidney stones than their leaner counterparts, according to a 2011 study in The Journal of Urology. Researchers aren’t quite sure why, but they suspect that the extra poundage changes the environment in your urinary tract, making it easier for kidney stones to form. “People who are obese have altered urinary pH levels, which can cause a buildup of uric acid-forming kidney stones,” says Dr. Sur.

While it’s true that obesity increases your risk of stones, so can bariatric surgery, according to one 2009 study in The Journal of Urology. “It’s thought that after the procedure, people might not absorb as much calcium from their diets,” says Dr. Stork. “When that happens, the build-up of oxalate in the urinary tract could lead to a kidney stone.” If you’ve recently had surgery, talk to your doctor about how you can cut your risk, either by drinking more water, limiting meat and sodium, or consuming enough calcium. 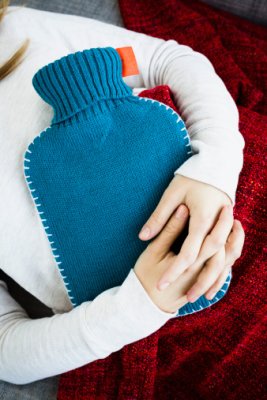 Everything You Need to Know About Your Gallbladder
Next Up: Editor's Pick