A Brief History of Leftovers

If you cooked a turkey for Thanksgiving — whether you deep fried, roasted, grilled or smoked it — chances are you served up a bird far too large to be consumed in one sitting. And chances also are you did this intentionally, mashing too many potatoes and baking too many pies along the way. If you simply ate someone else’s grub, you likely went home with too much of everything — enough to throw your own feast. It’s a gluttonous day.

Leftovers have been a part of human eating culture since ancient man realized the fruits of a hunt would stay edible for a while if they were stored in the back of a cold, dark cave. Ancient Greeks and Romans hauled ice and snow down from the mountains, wrapped it in straw or buried it in cellars where it slowed down food spoilage, although “leftovers” back then were more along the lines of fall harvest foods that could be stored and eaten when sustenance was scarce.

But by the end of the 19th century, ice delivery men visited American homes as regularly as milk men, depositing large cubes into ice boxes made of wood and often lined with tin. According to Dupont, which later invented the coolant Freon, ice was harvested where it formed naturally — including from New York City’s rivers — and shipped to the South, all in the name of food storage. In the 1840s, a Florida physician named John Gorrie, trying to cool the rooms where patients were suffering from yellow fever, figured out how to make ice using mechanical refrigeration, paving the way for household refrigerators that appeared in American homes en masse in the 1920s and 1930s. It wasn’t a moment too soon. As families struggled to feed their children during the Great Depression, it was unthinkable to throw away leftovers.

As home cooks reveled in their convenient new food storage box, plastics innovators pounced on an unmet need for containers that would seal in food and keep refrigerators smelling fresh. New Hampshire native Earl S. Tupper launched Tupperware in the 1940s, and by the following decade, he was marketing the containers via Tupperware “parties” where salespeople could demonstrate the distinctive “burp” that guaranteed longer lives for leftovers. (Tupperware was a roaring success; Tupper sold the company for $9 million in 1958.) For Americans who didn’t want to purchase an entire line of pastel plastic containers, Dow Chemical started selling Saran Wrap in 1953, and Ziploc storage bags in 1968.

But perhaps the greatest innovation in the development of leftover culture came in the 1970s, when the first affordable home microwave ovens went on sale. By 1986, a quarter of American homes were outfitted with microwaves able to reheat leftovers in seconds. The appliance is now in more than 90% of U.S. households. Still, if you’re not so keen on beaming molecule-shaking waves into your food, advice abounds on how to fit leftovers into your diet more creatively, with cookbooks on the market like “The Use It Up Cookbook,” “Second Time Around,” and “The Rebirth of Leftovers.”

Of course, no cookbook or microwave oven is required for the most beloved leftover Thanksgiving meal of all time. Recipe: Two slices of white bread, cold turkey, and lots of mayo. 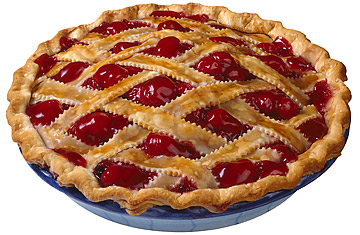 A Brief History of Pie
Next Up: Editor's Pick