A Brief History of Waffles

Thanks to a flooded plant in Atlanta and a broken bakery in Tennessee, Kellogg will be rationing its shipments of Eggo waffles well into 2010. Considering that Eggos account for nearly 70% of frozen waffles, the shortage is being treated as nothing less than a national calamity.

Like many of Western civilization’s finest achievements, the long and delicious history of waffles can be traced to ancient Greece, where Athenians cooked flat cakes called obelios between two metal plates. The word waffle is related to wafer, as in the Communion wafers that were a staple of early Christian fasts. The secular–and considerably tastier–waffle was born in the Middle Ages; irons engraved with coats of arms, symbols of love and the familiar honeycomb (said to resemble interlocking crosses) were used to brand the treats.

Waffles arrived in the U.S. with the Pilgrims, who sampled them in Holland en route to Massachusetts. Thomas Jefferson reportedly brought a waffle iron home from France around 1789, helping spark a fad for waffle parties in the States. The electric waffle iron largely did away with the cumbersome stovetop griddle, but it took a family of California wafflepreneurs to make the foodstuff a breakfast staple. The Dorsa brothers–Frank, Tony and Sam–invented instant waffle mix in the mid-1930s and later developed a carousel-like contraption that could churn out thousands of waffles in an hour, ready to be frozen and shipped. Kellogg bought the company in 1970 and introduced its catchy “Leggo My Eggo” slogan two years later.

The great waffle shortage of 2009 has prompted hoarding and profiteering–one eBay user auctioned a “rationed” box of blueberry Eggos, “toaster not included”–but it helps to keep things in perspective. As Frank Dorsa’s son Richard told the San Jose Mercury News, if his dad were still around, he’d just “shake his head and say, ‘This is silly.'” 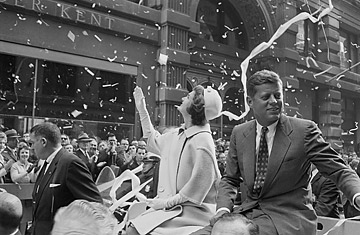 Ticker-Tape Parades
Next Up: Editor's Pick