Here's Everything J.K. Rowling Has Revealed About Harry Potter in 2015 So Far

In 2011, J.K. Rowling promised fans she’d be bringing them a unique experience with her fansite Pottermore. “I’ll be sharing additional information I’ve been hoarding for years about the world of Harry Potter,” she said. And, boy, has she delivered. But not just on Pottermore. It’s on Twitter, too.

In 2014, we learned more about Harry and his cohort as they entered their thirties and juicy information on characters like Dolores Umbridge, Severus Snape and Draco Malfoy. And this year, we’ve been treated to a few more interesting revelations. Here’s everything we learned about the wizarding world in 2015 so far.

With Rowling writing the screenplay for her Potter spinoff Fantastic Beasts and Where to Find Them, the author has used Twitter to tease bits and pieces about the story. But it wasn’t until recently that she confirmed the main character would be visiting an American wizarding school.

Whether your Gringotts vault is stacked with galleons or not—Hogwarts is tuition-free. When a Mic journalist estimated it would cost more than $43,000 for school, including the cost of wands, robes and cauldrons, Rowling shut down the rumor.

Moaning Myrtle did, indeed, have a full name

The melancholy ghost who haunts the first-floor girls’ bathroom at Hogwarts shares a name with a certain American politician.

Fans knew their favorite characters weren’t safe from Voldemort, but Fred Weasley’s death during the Battle of Hogwarts was almost too much to handle. Rowling understood and took to Twitter to apologize.

Harry became an overworked employee at the Ministry of Magic

In June, J.K. Rowling announced that a new play based on Harry Potter would hit London’s West End in Summer 2016. She spent the next four months quieting users on Twitter who suggested the play would be a prequel. And in October, the details were finally cemented: the play’s plot will pick up right where the books left off, 19 years after the battle of Hogwarts and just when Harry’s youngest son was first heading to the School of Witchcraft and Wizardry. Audience meambers will find Harry now as “an overworked employee of the Ministry of Magic, a husband and father of three school-age children. While Harry grapples with a past that refuses to stay where it belongs,” the description continues, “his youngest son Albus must struggle with the weight of a family legacy he never wanted. As past and present fuse ominously, both father and son learn the uncomfortable truth: sometimes, darkness comes from unexpected places.”

With the release of new Deathly Hallows chapters on Pottermore, Rowling revealed interesting details on the relevance of alchemy in the series. “The colours red and white are mentioned many times in old texts on alchemy,” she writes, explaining that some say these colors symbolize base metal and gold, representing “two different sides of human nature.” These colors inspired the names of two relevant characters in the Potter universe: “Rubeus (red) Hagrid and Albus (white) Dumbledore…both hugely important to Harry,” Rowling writes. “Seem to me to represent two sides of the ideal father figure he seeks; the former is warm, practical and wild, the latter impressive, intellectual, and somewhat detached.”

Rowling also used Pottermore to give the Dursleys an extended backstory. Vernon Dursley’s dislike for Harry “stems in part, like Severus Snape’s, from Harry’s close resemblance to the father they both so disliked.” Rowling also wanted to see a nicer side of Aunt Petunia, “when she said goodbye to Harry for the last time.” But she stuck to the true nature of Petunia’s character, having her “behave in a way that is most consistent with her thoughts and feelings throughout the previous seven books.”

An anonymous male created a list called the “Sacred Twenty Eight,” a definitive list of Purebloods, and the Potters are not on it. In the early 1900s, Henry Potter (also known as Harry) publicly condemned the Minister for Magic, who didn’t want the magical community to help Muggles in World War 1. This was “a strong contributing factor in the family’s exclusion” from the list.

Linfred of Stinchcombe was the first Potter

Linfred, nicknamed ‘the Potterer,’ became the first Potter. He cured his Muggle neighbors with magical remedies, none of whom realized he was a wizard. He’s actually responsible for originating concoctions that went on to become well-known potions like Skele-gro (what fans will remember Madame Pomfrey used to heal Harry after Professor Lockhart blundered a fix to Harry’s broken arm during a Quidditch match in Chamber of Secrets). Linfred had seven children, his eldest named Hardwin, who married a young witch named Iolanthe Peverell (aha!). She was the eldest grandchild of Ignotus Peverell, so she got his invisibility cloak, handing it down to the oldest in each generation.

Fleamont Potter, the son of Henry (also known as Harry—see above), was named for Henry’s mother, whose maiden name was Fleamont. He became rich after inventing a magical hair potion, but it’s unclear if Hermione ever tried it. He and his wife Euphemia didn’t conceive a child until later in life–and then James was born. Fleamont and Euphemia lived long enough to meet their daughter-in-law named Lily but died of Dragon pox before Harry was born.

The Patronus charm, an advanced one known most for defending its user against deadly creatures called Dementors, takes the form of an animal. The defensive charm’s shape typically has deep meaning—Harry’s is a stag, just like his parents (and Snape’s is too since he was in love with Harry’s mother). When a fan asked Rowling what gamekeeper and fan favorite Rubeus Hagrid’s would be, she revealed a heartbreaking revelation: he couldn’t produce one.

It’s now the dawn of the age of Hufflepuff

Move over, Gryffindor. The Hogwarts house known for its brave of heart is taking a back seat to Hufflepuff. New Scamander, the main character of the upcoming Fantastic Beasts and Where to Find Them film, was a Hufflepuff. When Pottermore posted a list of famous Hufflepuff’s, known for loyalty and patience, Rowling chimed in.

James Potter is in his first year at Hogwarts

Rowling caused a movement on social media with the hashtag #BacktoHogwarts when she revealed that September 1, 2015 was James Sirius Potter’s first day at Hogwarts. Fans went crazy at the news (mostly because it made original fans feel much older), and even brands got in on the fun, with Whataburger making a joke about the Hogwarts express. Rowling, as usual, played up to her fans, letting them know James was sorted into Gryffindor, just like his dad.

As with all things Rowling, there’s meaning behind it. The french word ‘mort,’ pronounced with a silent T, means death.

She has a favorite fan theory

With many a theory swirling in the Potterverse, Rowling took to social media to announce her favorite one.

The theory stems from the wizarding fairy tale The Tale of the Three Brothers, which follows the Peverell Brothers as they receive rewards for cheating Death: the unbeatable Elder Wand; the Resurrection Stone that brings people back from the dead; and the Invisibility Cloak, which conceals its user. These three items are often referred to as The Deathly Hallows, hence the name of the final book. Voldemort is the oldest brother, murdered in his bed by someone who sought the Elder Wand. Snape is seen as the middle brother, who was driven to suicide after resurrecting the girl “he had once hoped to marry, before her untimely Death.” Harry would be the youngest brother, who escapes Death with the cloak before greeting “Death as an old friend” and going with him gladly. The Tumblr user, though, posits that Dumbledore is Death. “He greeted Harry at King’s Cross and was the one behind Snape and Voldemort’s death….He’s the one who gave Harry the invisibility cloak too…And he had the stone and the wand too.”

On June 5, she explained why she wasn’t invited to the Slytherin’s 35th birthday party.

She’s open to Dumbledore and Gandalf getting hitched

When Ireland legalized gay marriage, the author shared a meme about Hogwarts’ most cherished headmaster and The Lord of the Rings‘ heroic wizard taking a trip to Ireland to make it official. 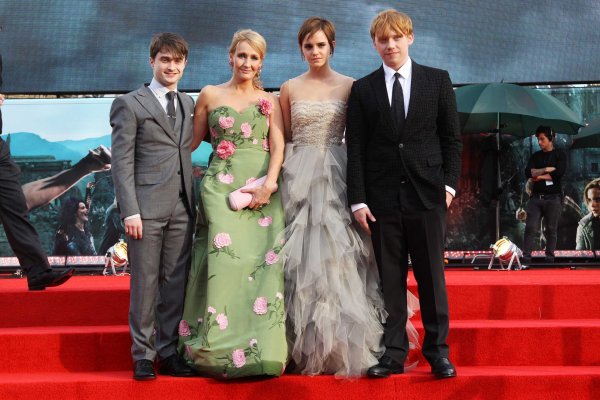