President Obama expressed his exasperation at the inability to change U.S. gun laws in a Thursday speech following a shooting at a community college in Roseburg, Ore. that left at least 10 dead.

As the number of mass shootings during his presidency has mounted—Thursday’s address was his 15th in response to one—Obama’s rhetoric about the need for gun control has grown more pointed. “As I said just a few months ago, and I said a few months before that, and I said each time we see one of these mass shootings, our thoughts and prayers are not enough,” Obama said Thursday. “It does not capture the heartache and grief and anger that we should feel. And it does nothing to prevent this carnage from being inflicted someplace else in America — next week, or a couple of months from now.”

Below are some of the other memorable statements Obama has made in response to shootings.

A white supremacist gunman killed a guard at the U.S. Holocaust Memorial Museum in Washington, D.C. on June 10, 2009.

Seventeen-year-old Trayvon Martin was killed on Feb. 26, 2012 by George Zimmerman, a neighborhood watchman. Obama read a personal statement after Zimmerman was acquitted in July 2013.

Seven people were left dead at a Sikh Temple in Oak Creek, Wis. on Aug. 5, 2012 in an attack by a white supremacist. In a statement, Obama reminded Americans of the importance of religious pluralism.

Michael Brown, an 18-year-old black man, was fatally shot by a white police officer in Ferguson, Mo. on Aug. 9, 2014, sparking outrage from the local community and across the country. Obama remained silent on the shooting for three days before releasing a statement.

Nine African Americans were killed in a Charleston, S.C. church on June 17, 2015 in an attack that was racially motivated. 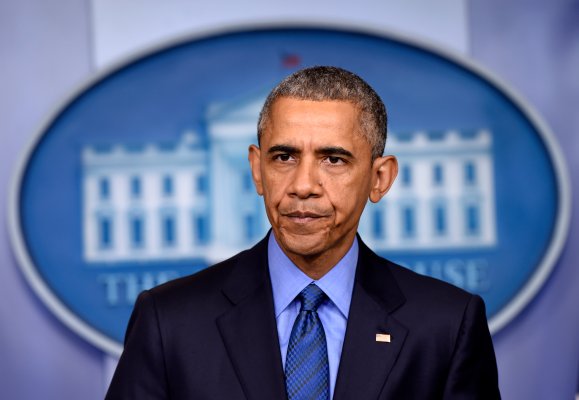 President Obama Calls for Reflection on Gun Control After Charleston Shooting
Next Up: Editor's Pick