How the FIFA Scandal Trumped the Women's World Cup

The women’s World Cup starts on Saturday. This might have slipped your mind. With the NBA Finals and the Triple Crown chase and the French Open and baseball all going on, your cluttered sports brain might—quite understandably—be focused on just one soccer story right now: the one involving surprise arrests and millions in bribes and resignations and indictments and the Onion and the Santa Claus-looking guy who made a lot of money manufacturing smiley-face buttons, who kept a hotel room for his cats with illicit soccer money, who chirped, just like the parrot sometimes perched on his shoulder.

The one that will someday make a fine movie, surely more gripping that the $27 million FIFA-financed propaganda film now playing in U.S. theaters, in which disgraced soon-to-be ex-FIFA president Sepp Blatter is a hero.

FIFA’s scandal has surely overshadowed the women’s World Cup. At the first FIFA press conference of the tournament, for example, officials had to beg journalists to ask about women’s soccer. And that’s a shame, because this is the biggest women’s sporting event on the globe, a rare chance for some of the world’s best female athletes to shine on their own stage (unlike, say, the Olympics, in which both men and women compete).

Not that Sepp Blatter’s downfall isn’t good for the women’s game. He recently called himself the “godfather” of women’s soccer, even though the best players in the world sued FIFA because this World Cup, in Canada, is the first ever—men’s or women’s—to be played on artificial surface. And even though Blatter once said women’s soccer would be more popular if the players wore tighter outfits, and didn’t recognize one of the world’s best players at a FIFA player of the year ceremony in 2013. At that same event, he confused the girlfriend of American standout Abby Wambach for Marta, the Brazilian star who won FIFA world player of the year honors five times, and looks little like Abby Wambach’s then-girlfriend, now-wife. Women’s soccer grew in popularity during Blatter’s reign. But the sport may have succeeded in spite of him.

While soccer fans around the world are cheering U.S. Attorney General Loretta Lynch for going after FIFA’s alleged crooks, excuse the women’s soccer players at the World Cup if they’re not exactly cheering Lynch and her crew. The timing is unfortunate. Not that the U.S. investigators could wait when justice is at stake, and when the FIFA Congress in Zurich offered the perfect logistical opportunity to arrest a group of fat cats. Plus, once the games begin, maybe fans will turn their attention back to the field. Maybe fans will grow tired of more admissions, indictments, or any other twists this story takes. Maybe they’ll need an on-field distraction more than ever.

Hopefully this is how the World Cup plays out. Still, too bad that FIFA Congress wasn’t in the fall. 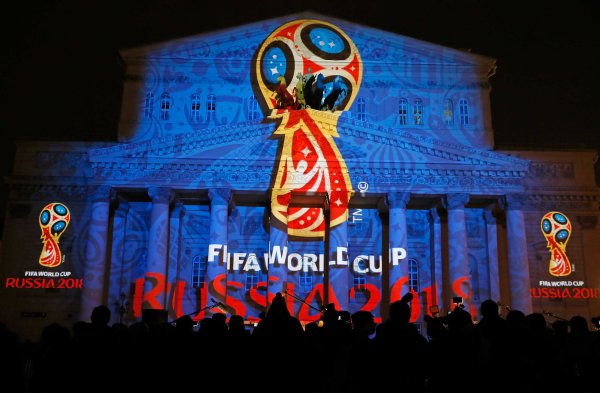 Russia Wants to Use Prison Labor for the World Cup
Next Up: Editor's Pick