Even if you eat plenty of fruits and veggies and already know about the latest and greatest superfoods on the market, that’s only half the battle. The other half: understanding how to reap the biggest benefits from all that hard work. We asked a pair of registered dietitians to pinpoint the big mistakes that are preventing you from extracting the most vitamins and minerals from the foods you eat.

These little pods have lots of health benefits locked inside of them: they’re high in fiber, heart-healthy omega-3s, and lignans, which are phytochemicals that may have cancer-protecting properties. They key word here? Locked. Your body may not be able to digest whole flaxseeds, sprinkling a handful into your morning smoothie or onto your yogurt snack won’t get you very far in the nutrient department. According to Katherine Zeratsky, RD, a registered dietitian with the Mayo Clinic, most experts actually recommend eating flaxseeds ground. Buy them pre-ground or throw them in a coffee grinder, spice mill, or a specially designed flax mill so you don’t end up flushing the health benefits away.

Americans are drinking more tea than ever—almost 20% more than they did in 2000, according to market research. Before you pour yourself another cup, make sure you’re not also reaching for milk: Studies have shown that while the addition of dairy to black tea doesn’t affect the herbal drink’s antioxidants, it does negate any cardiovascular benefits you might have been hoping to reap. Milk proteins can bind with the catechins in tea, which can make the beneficial plant compounds more difficult for the body to absorb.

We totally understand: You can only eat so much raw or steamed broccoli before it gets really boring. But if you want to get the most health mileage from this cruciferous veggie, resist the urge to boil or fry it. Broccoli is loaded with vitamin C, chlorophyll, antioxidants, and anticarcinogenic compounds, and a 2009 Chinese study found that to keep those health benefits intact, steaming is the best cooking method. Boiling and stir-frying were found to cause the biggest loss in nutrients.

There’s nothing quite like biting into those first juicy summer strawberries, especially when you think about all the fiber, antioxidants, and vitamin C each bright-red berry holds. Here’s the catch: To get the full spectrum of health benefits, you want to avoid cutting them for as long as possible. Kristy Del Coro, senior culinary nutritionist for SPE Certified, explains that certain nutrients—especially vitamin C—are sensitive to light and oxygen. When you cut into strawberries, you’re exposing more cells to those nutrient-deteriorating elements. “That said, if the convenience of pre-cut produce makes the difference between you consuming fruits and vegetables or not, it’s still a better option than not eating them at all,” she says. “Frozen produce actually retains a lot of nutrients, and it’s better for you than eating an out-of-season fruit or vegetable that’s traveled a great distance or hasn’t been allowed to fully ripen.”

Unlike vitamin C, allicin—the cancer-fighting enzyme found in garlic—actually benefits from exposure to air. To that end, Sara Haas, RDN, a consultant dietitian, chef, and spokesperson for the Academy of Nutrition and Dietetics, recommends letting chopped garlic sit out for about 10 minutes before you toss it into any dish you’re making so that the compound gets fully activated.

Whole, unrefined grains and dried beans contain antioxidant compounds called phytates, which can bind to vitamins and minerals in food and prevent them from being absorbed by the body, explains Del Coro. “Intact whole grains that still have the outer layer [the bran], such as farro, freekeh, sorghum, and wheat berries, should be soaked in water overnight to help release the phytates,” she says. “But this doesn’t apply to semi-refined or unhulled types like pearled barley or instant oats.” In addition to helping you get the maximum amount of nutrients like iron and zinc, the soaking process also means less work for your digestive tract.

You know that watery substance that you often find atop your Greek yogurt? The one you probably pour down the sink? That’s whey, and it contains protein and vitamin B12, along with minerals like calcium and phosphorus, says Haas. Rather than dumping the whey out, give your yogurt a quick stir so you retain all of its health benefits. Another fact to note, says Haas, is that you’re not going to get yogurt’s probiotic benefits if you’re cooking a hot dish like chicken curry or marinated lamb with it. “Live and active cultures can’t stand up to heat and will be destroyed in the cooking process,” she explains. “You’ll still be getting the protein, calcium, and vitamin D though.”

Fresh, ripe tomatoes add a burst of flavor to salads and sandwiches, but if you want to absorb their lycopene—the phytonutrient responsible for the fruit’s cancer- and heart-disease-fighting properties—Haas says that you’re better off cooking them. Cornell researchers also found that tomatoes’ antioxidant content increases when they’re heated to roughly 190 degrees Fahrenheit. Try this roasted tomato and asparagus recipe.

Everyone loves a summer barbecue, but be wary of those “perfectly charred” cuts of meat, says Tanya Zuckerbrot, RD, a registered dietitian practicing in New York City. “Grilling meat at high temperatures over an open flame may increase cancer risk,” she says. Zuckerbrot points to the National Cancer Institute, which warns that two potentially cancer-causing chemicals—heterocyclic amines (HCAs) and polycyclic aromatic hydrocarbons (PAHs)—are formed when meats are cooked using high-temperature methods like chargrilling. “Don’t rely on the color of the cooked meat to gauge food safety,” says Zuckerbrot. “Use a food thermometer that shows that meats are cooked to a safe minimum internal temperature as recommended by the USDA.”

We’ve all seen those convenient microwave-safe veggie pouches, and nuking these spears in a ready-made bag seems a whole lot more convenient than busting out a steamer and pot and waiting for water to boil. But as Zuckerbrot points out, a study in the journal Acta Agroculturae Scandinavica found that this cooking method depletes this vegetable’s vitamin C content because the nutrient is water-soluble. Instead, Zuckerbrot recommends a quick steam or stir-fry on the stove, emphasizing that the important thing is to cook the vegetable so that it’s tender and crisp, rather than mushy and soft. “When steaming asparagus, save the leftover water,” she adds. “It’s rich in vitamins and minerals. You can add it to a sauce or soup.” 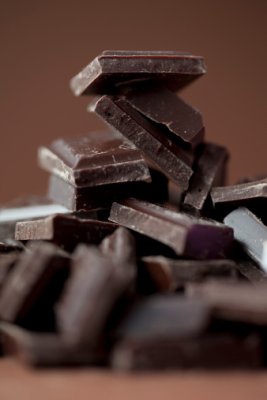 6 Foods That Can Make You Happier
Next Up: Editor's Pick