As the city of Baltimore is shaken by riots in the wake of peaceful protests over the death of Freddie Gray, observers have had cause to reflect on the relationship between nonviolent and violent demonstration. In particular, one quote from Martin Luther King, Jr., has become a touchstone for those who seek to understand why those individuals have taken to the streets: “A riot,” King said, “is the language of the unheard.”

The quote is often traced to 1968, but it was actually a frequent rhetorical turn for King, appearing years earlier than that. In 1966, for example, in a Sept. 27 interview, King was questioned by CBS’ Mike Wallace about the “increasingly vocal minority” who disagreed with his devotion to non-violence as a tactic. In that interview, King admitted there was such a minority, though he said that surveys had shown most black Americans were on his side. “And I contend that the cry of ‘black power’ is, at bottom, a reaction to the reluctance of white power to make the kind of changes necessary to make justice a reality for the Negro,” King said. “I think that we’ve got to see that a riot is the language of the unheard. And, what is it that America has failed to hear? It has failed to hear that the economic plight of the Negro poor has worsened over the last few years.”

At the time, a season of unrest was fresh in their memories. Stokely Carmichael had become chair of the Student Non-violent Coordinating Committee that year, and helped introduce the phrase “black power” into the nation’s lexicon. As TIME pointed out in a story that July, the phrase itself was probably about a decade old at that time, and was not inherently anti-white, but had the potential to “go sour in that way.” King was, from the beginning, a strong voice against the use of the phrase. While it was necessary for African-Americans to gain power, he believed, the impression that the power wouldn’t be shared was a dangerous one.

King’s conviction, however, did not stop the influence of those who championed riots as a tactic. The following year, in delivering his “The Other America” speech at Stanford University, King returned to his idea about what goes unheard:

King’s point, though subtle, is clear. He does not support violent tactics, including riots, but he argues that the way to stop citizens from rioting is to acknowledge and fix the conditions that they are rioting against. And in the larger context of that speech, he got a chance to explain how exactly that mending should occur. The Other America speech is, at its heart, a speech about economics. (That’s why it’s popular with Rand Paul.) The solutions included fair-housing legislation, a federal law ensuring fair access to justice—about 50 civil rights workers had been killed in Mississippi since 1963 and there had been not a single conviction, he noted—and the institution of a national guaranteed annual income, which could be paid for by ending the war in Vietnam.

King also makes the point that those who talk about riots being counterproductive because they caused white backlash are missing the whole picture. “It may well be that shouts of Black Power and riots in Watts and the Harlems and the other areas, are the consequences of the white backlash rather than the cause of them,” he said. Even as major steps forward were taken, steps backward—the backlash, often harder to pin down—were constantly on the horizon. Desegregation was the law of the land and the Civil Rights Act had been passed, but economic inequality and racism were alive and well. The result was, he posited, despair. Despair is linked to anger, and thus to riots.

King ended the speech on a note of hope and faith, not just for justice but also for achieving it in a way that was nonviolent and intersectional.

A few months later, in April of 1968, King was assassinated. Some citizens in cities across the country reacted with what TIME called a “shock wave of looting, arson and outrage.” 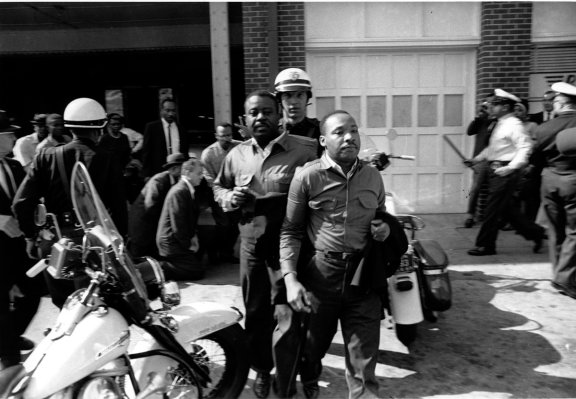 Why MLK Was Jailed in Birmingham
Next Up: Editor's Pick