Am I Less Manly for Buying a Small Apple Watch?

My name is John, and I suffer from Dainty Wrist Syndrome.

The plague of the creative class, DWS involves the dwindling of the wrist muscles such that the afflicted can fit into those impossibly small cuff sizes on a dress shirt. (Victims are also known have impossibly smooth, uncalloused hands.) In all honesty, I’m not quite that bad off — I can open almost any jar without help — but I do still register (just barely) on the DWS spectrum. And when I saw that the Apple Watch came in two sizes, one with a 38-mm face and the other with a 42-mm face, I panicked and couldn’t help but wonder: Would I be less of a man if I bought a smaller Apple Watch?

There have been many articles written about how to figure out which watch size is right for you (my favorite is this neat dollar bill-folding trick), but none help you deal with the side-eye you’ll get after buying the wrong one. So I texted my best friend, an investment banker who inherited a love of watches from his grandfather, a former watch repairman. Surely, he would surely set me straight. “Hold on. Eating a sandwich,” he replied. A few bites later, he explained that he works with people who wear $10,000 watches as a statement piece, so I should go big or go home.

But one thing people don’t realize about the smaller-sized Apple Watch is that it’s already quite sizable. According to Matt Bain, Miami Beach, Fla.-based antique watch dealer, the standard size of a men’s watch today, on the smaller side, is approximately 36 mm.

“Men are wearing watches all the way up to 48 mm, 48 being very large,” he says. “I think the perfect size watch for a man today is probably about a 40-mm watch.”

Which, of course, is right in the middle of Apple’s sizing, and as such, is no help at all.

In Bain’s expert opinion, the smaller Apple Watch should work perfectly fine for a man of my slenderness. In fact, when it comes to Apple’s watch, he seems to regard its face size like that of a touchscreen phone — it’s all about utility and being able to see and interact with the display.

“I have the smaller iPhone … other people don’t even care. I think on the wrist, it’s the same thing,” he says. “Thirty-eight millimeters is still a large watch — it’s not a small watch, and I don’t consider it to be a woman’s one.”

For its part, Apple claims their watches are unisex, but their bands certainly have target markets in mind. For example, the Leather Loop band, which looks rugged yet refined, will only fit the 42-mm Apple Watch. And the Modern Buckle, with its elegant, subtle styling, is only available on the 38-mm version. So, if, like me, you want a smaller watch face with the more burly leather strap, you’re out of luck, and likewise if you want a larger watch face with a demure leather band.

Still torn, I decided to get a woman’s opinion. I’ve known Andrea Lavinthal, PEOPLE Magazine’s style and beauty director, since college. It turns out she’s a watch aficionado herself, owning a small collection of treasured timepieces.

“When they say unisex for a watch, in my opinion, that means typically a woman can wear a men’s watch,” Lavinthal says. “But it almost never means a man can wear a woman’s watch.”

Funny enough, Lavinthal does make an odd exception to this rule. In contrast to my best friend’s assertion that I should go big to show off, Lavinthal thinks I should brag by going small. According to her, guys tend to size up more than is necessary on everything from cars to clothes.

“They size up in their clothing forever until they either meet a woman who gives them a makeover, or they find a really good sales person, tailor, or friend with better style who they randomly start trusting,” she says. “It almost takes an intervention to get a guy to wear the proper size clothing.”

These man-childs apparently wear large and extra-large sized clothing, when they really should be sporting mediums. “Wearing the bigger size makes you look like a little person wearing a big t-shirt,” says Lavinthal. “The medium is going to fit you and actually make you look bigger.”

And likewise, when it comes to this smart watch — which is still an awkward fashion piece, despite Apple’s design prowess — wearing the proper size is likely to make it less clunky. Heck, if you wear the right size, it might even look like a watch, and not a wrist-top computer.

So I put the question to Lavinthal, point blank: If I bought a smaller Apple Watch, would she think I was less of a man? “No,” she responds. “I would say you’re cheaper.” And this is true: the smaller-sized Apple Sport Watch rings in at $50 less than the larger model. A watch that fits and almost enough extra cash to buy one of these lovely Nomad Apple Watch Stands? That is a stigma I can live with. 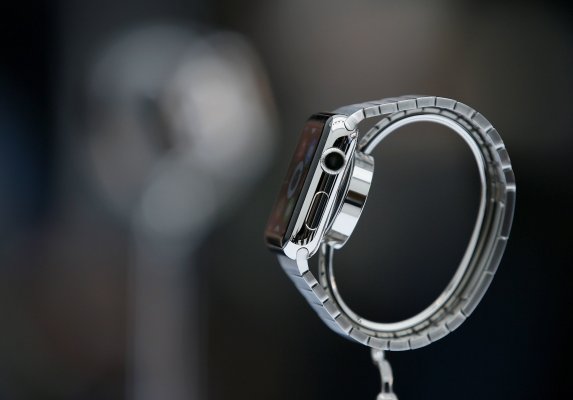 Here's What It Was Like Buying an Apple Watch Today
Next Up: Editor's Pick